After three years of planning, the decades old bridge, located between West Jackson and West Depot avenues, is finally getting replaced. 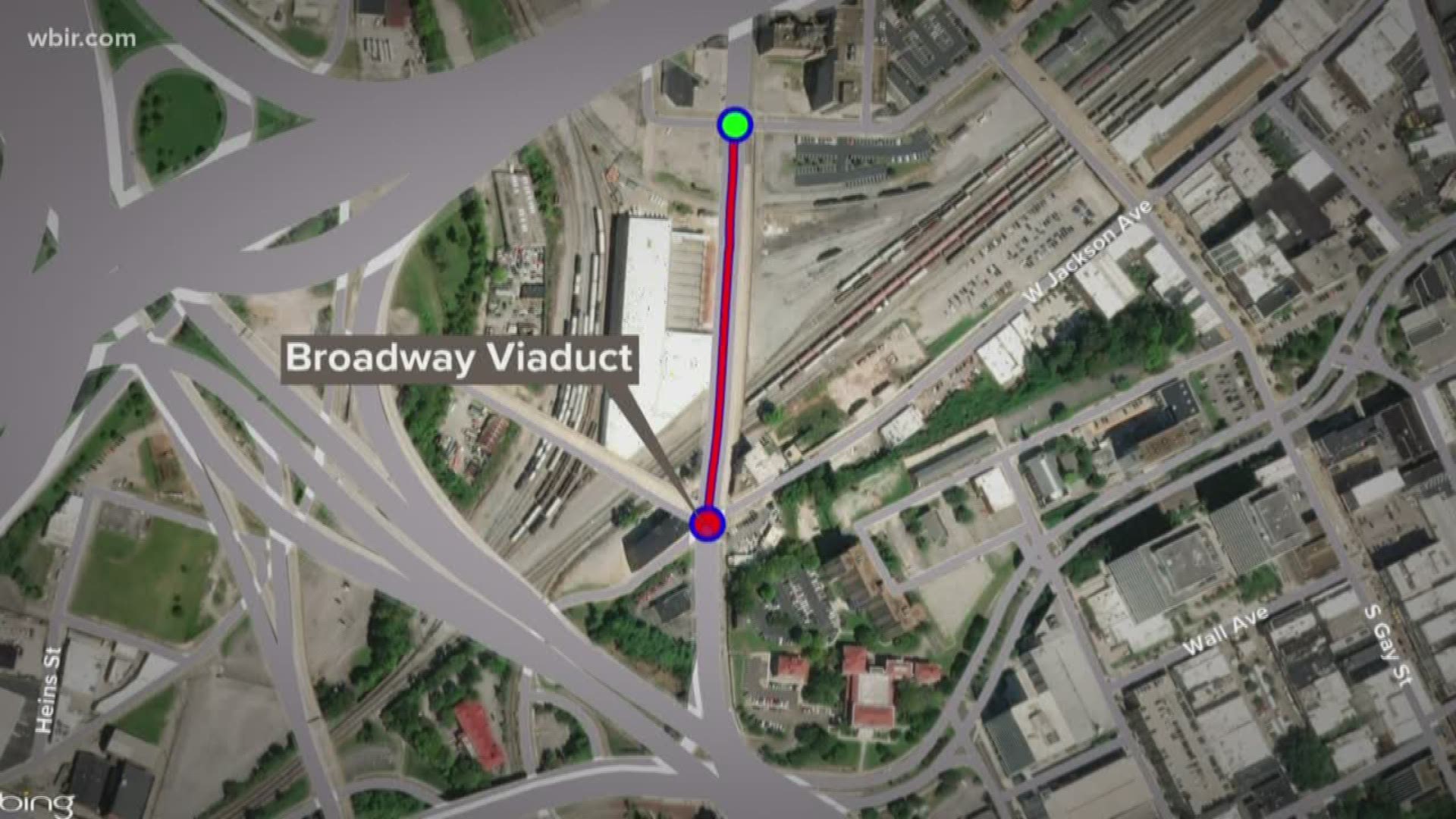 KNOXVILLE, Tenn. — On this Driving You Crazy Monday, a major bridge linking downtown to parts north is shutting down until 2022.

The Tennessee Department of Transportation is continuing construction on the Broadway Viaduct. It's a large bridge replacement project. The bridge sits between West Jackson and West Depot Avenues and spans the Norfolk Southern rail yard north of downtown.

Starting Nov. 4, the Broadway Viaduct will close to all traffic for more than two years as crew work to build this new $17 million bridge. The bridge spans about 0.23 miles.

After three years of planning, the decades-old Broadway Viaduct is finally getting replaced. Construction began on July 19, 2019 with contractor Bell & Associates Construction.

"Broadway Viaduct is an older bridge. It was built back in the 1920s,” said TDOT spokesperson Mark Nagi. “Normally a bridge like this, the lifespan is about 50 or 60 years, so we're certainly going over 90 years."

The bridge sits over Norfolk Southern Railroad, and it's a vital connection from downtown. The existing bridge is 746  feet long and made of concrete. The bridge has four travel lanes, two in both directions.

According to a report from TDOT, the current bridge “shows signs of deterioration, and both vertical and horizontal clearances are at or below current standards.”

"This is a bridge that at last look had more than 10,000 vehicles per day using it,” said Nagi.

Starting Nov. 4, those drivers must use a new route when construction moves in, closing the bridge entirely. According to TDOT, demolishing the bridge will be completed in two phases. Crews have not set a date on the demolition phase.

“It will remain closed throughout the project, which as of right now, we have a completion date of August of 2022," said Nagi.
For the next three years, drivers have these new routes to get around traffic.

HOW TO GET AROUND CONSTRUCTION

Despite the changes for drivers and nearby business owners, Nagi believes the improvements are necessary for a safer more efficient bridge. The new bridge will be 62-feet wide, with two 11-foot travel lanes, a center turn lane, bike lanes, and sidewalks. The new bridge will have a clearance of 23 feet.

As construction continues on this multi-million-dollar project, a community will soon say goodbye a nearly century-old way of passage.

According to Nagi, detour routes in this area may change. It's all dependent on specific bridge work at that time. Also, crews will try to minimize impacts to nearby buildings and businesses.

If there’s a road or project that’s Driving You Crazy send us an email at drivingyoucrazy@wbir.com.