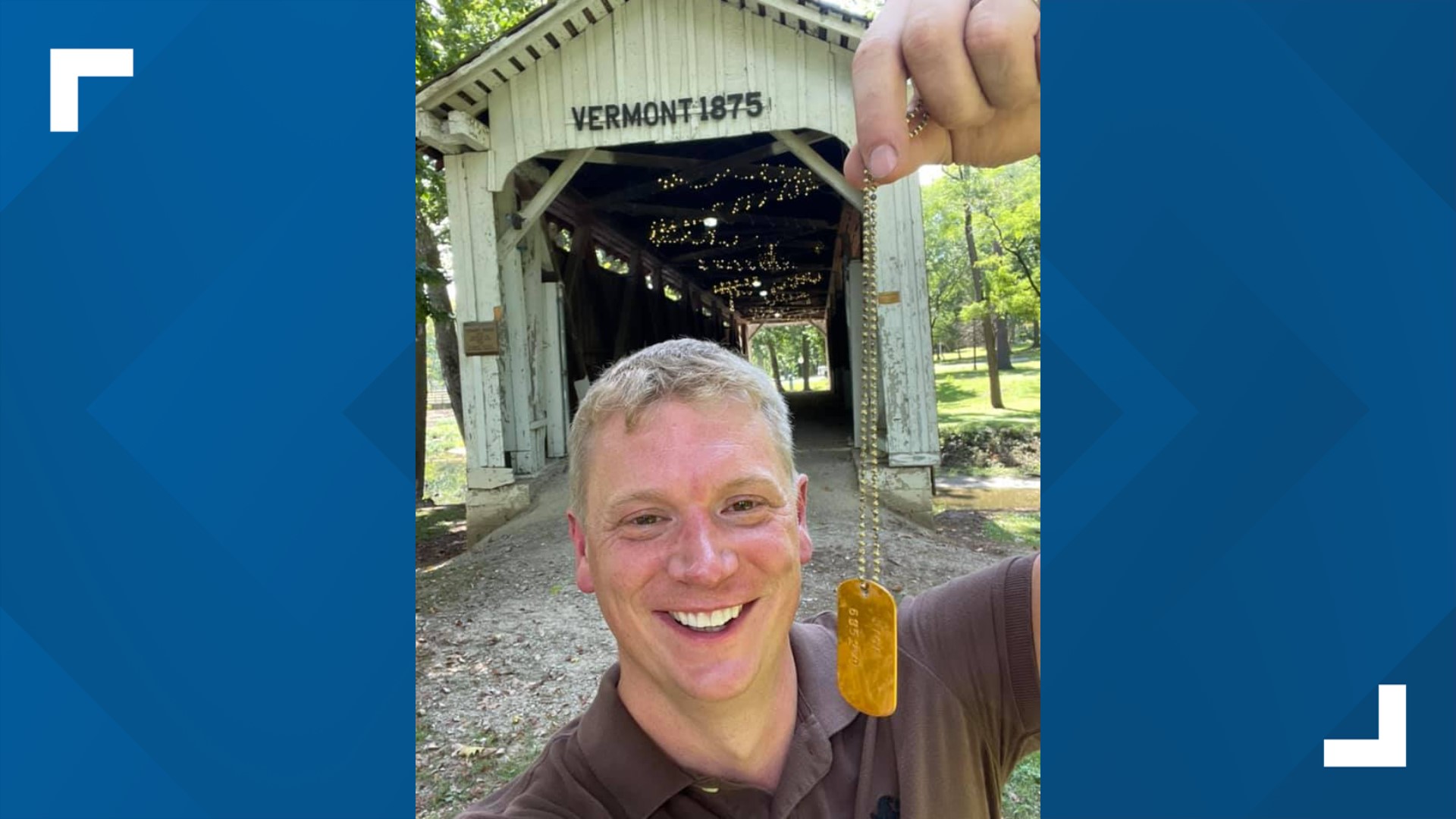 KOKOMO, Ind. — A nationwide search for a Willy Wonka-eque "Golden Ticket" and the keys to a candy factory ended in central Indiana.

The treasure hunt was the brainchild of Jelly Belly creator David Klein, who hid gold dog tags in each state last fall, good for a $5,000 prize for the hunter who found them. The state searches were limited to 1,000 people who registered for the hunt. Those who registered were also entered into the nationwide "Ultimate Treasure Hunt" and a chance to win one of Klein's candy factories.

Klein said the search was born out of his desire to give back as he moved toward retirement, along with his partner Stephanie Thirtyacre's dream of creating a nationwide treasure hunt. He told our partners at the Kokomo Tribune the pair headed out to hide the grand prize ticket in March of this year, with his initial focus on a location in Kansas. But, as he told it, Thirtyacre began to tire of driving in Indiana and changed plans to head toward family in Illinois.

When they saw a sign for Kokomo, their plan for the final destination was set.

The search is on

One of the registered hunters, 39-year-old Andrew Maas, signed up for hunts in four states: Kansas, South Dakota, Wyoming and his home state of Colorado. He told the Tribune he solved the riddle that led him to one of the prizes in Kansas, but arrived a minute after a fellow contestant.

On Memorial Day, Klein posted the clue to send hunters out on the search for the final ticket:

Don’t have a instant idea, for a treasure diehard
We see witches nearby, two stand guard
Go Solve and Search, as low as our toe
Why find a nut and walks are no foe

As the weeks went on with no winners, Klein added more hints, narrowing the search down to Illinois and Indiana from the original six states.

Focusing on the first clue, Maas said the phrase "treasure diehard" got him thinking of Indiana Jones, which narrowed the search even further. In a Facebook post, Maas said he started looking up cities and towns in Indiana when Kokomo caught his eye.

"Right away (I) started singing, 'we'll get there fast and then we'll take it slow.' And I knew it had to be Kokomo, Indiana," he wrote.

Not very ironically, Klein said he began humming the same Beach Boys tune after seeing the road sign for Kokomo.

“It was such a fun name, and I knew David was a fun, lighthearted person,” Maas told the Tribune.

Late on the night of Aug. 28, Maas said he put all the pieces together and knew the clues were leading him to Kokomo's Highland Park. He bought a ticket for a 6 a.m. flight the next day from Denver to Indianapolis, then drove to Kokomo to hopefully finish his quest.

Using his online research of the park and a photo of the final destination provided to all contestants by Klein, Maas focused on the Vermont Covered Bridge in the park.

After spotting a gleam, Maas began digging and pulled the winning dog tags from the ground. He registered the code on the ticket on Klein's website and 20 minutes later, got a call from Klein himself, congratulating him on winning the candy factory.

RELATED: Yes, the frozen honey TikTok trend can cause health problems, such as cavities and stomach issues

Maas told the Tribune since it's not realistic to move his family from Colorado to Florida to get into the candy business, they're working on a deal with Klein to take ownership of the factory, then sell it back to "The Candyman" for more of a cash prize.

Credit: Andrew Maas
Andrew Maas with the "golden ticket" he found at the Vermont Covered Bridge in Kokomo's Highland Park.

“Whatever it is, we’ll be happy with it,” he said. “It’s money we didn’t have. But the excitement and adventure was the real reward. The money is the gravy on top.”

For Klein and Thirtyacre, they felt like winners, too.

“We honestly felt like we did some good for the world, and that gave us the greatest pleasure,” Klein told the Tribune. “It was something to think about and dream about. And sometimes dreams are better than reality.”