Celebrating 90 years of the Tennessee Theatre

The Tennessee Theatre opened its doors on Oct. 1, 1928

It was the end of the Roaring 20's, a happy, progressive decade, still more than a year from the stock market crash that would usher in the Great Depression. On this night, there was excitement and gaiety on Gay Street in downtown Knoxville.

Well-dressed patrons filed into the brand new movie palace in town. They'd been watching its progress for months, anxiously awaiting opening day, and it had finally arrived! Only 60 cents a person to enter! Oh, and a matinee is just 40. And look, kids can get in for a dime for an afternoon show!

What a grand place! No wonder they were calling it "the South’s most beautiful Theatre."

The Tennessee Theatre was designed by Chicago architects Graven & Mayger with a Spanish-Moorish style interior that incorporated elements from all parts of the world: Czechoslovakian crystals in the French-style chandeliers, Italian terrazzo flooring in the Grand Lobby, and Asian influences in the carpet and drapery patterns.

Those that entered that day probably weren't analyzing the architecture, but they were likely ooh-ing and aah-ing at the rich textures and bright colors.

It may not have mattered much on an early fall evening, but guests may also have noticed it was a lot cooler inside the theater. Could that be air conditioning? How wonderful! Some folks may have experienced that glorious invention for the first time at the Tennessee, as it was one of the first public places in Knoxville with AC.

Soon, the patrons filed in to take their places in the plush seats in the auditorium. Oh, look up at the domed ceiling!! Amazing!

There was no concession stand in the lobby, but enterprising folks may have a snack hidden in a pocket or purse. They may have gotten it out as the lights dimmed and they settled down for a couple hours of entertainment.

The main feature was Clara Bow's new silent movie, 'The Fleet's In." You know, she is Hollywood's "It" girl. This movie is about a girl who works in a dance hall who falls in love with a sailor!

But before the curtain opened to unveil the great silver screen, the patrons enjoyed other entertainment.

There was a news reel that could have featured stories like the recent discovery of penicillin, or the horrible death toll from a hurricane that hit Florida. Maybe the Yankees and the Cardinals might have been celebrated for making the World Series.

Then there was the Mighty Wurlitzer, and that's a sight to see and hear! This magnificent pipe organ rises from beneath the stage with Jean Wilson adding his accompaniment to the silent picture.

Nearly 10,000 people enjoyed the Tennessee Theatre on opening day, and they kept coming for decades to see their favorite stars on the silver screen. Even during the Great Depression, the theater remained open, providing an escape from the struggles of every day life.

The Theatre lost its shine after a few decades, but is glowing again

The Tennessee Theatre is as grand now as it was on opening day, thanks to a $25.5 million dollar renovation in the mid-2000's.

Over the years, the theater's majesty had faded a bit. People started going to big cineplexes to see movies. Downtown Knoxville had some hard times, with residents living, shopping, and looking for entertainment in the suburbs. It even closed several times during the 70's.

In 1981, the theater was purchased by James A. Dick, the man who founded Dick Broadcasting and started radio station WIVK. The theater was then transformed from a single-screen movie theater into more of a performing arts venue, with concerts and plays.

It was placed on the National Register of Historic Places, and the Knoxville Opera began holding regular performances.

But the theater, in addition to looking a little faded and worse for wear, wasn't the ideal location for live performances. The stage was too small for most big, touring productions, and all of the equipment had to be loaded in through the front door because the back of the theater was two stories above State Street. There also wasn't much a of backstage area for dressing rooms or set storage.

In 1996, the non-profit Historic Tennessee Theatre Foundation was founded to oversee the Theatre and to raise money to restore and renovate the building.

One of the first steps to bring the building back to its former glory was the restoration of the Mighty Wurlitzer. In 2000, the console, pipes, and other parts were removed and shipped to Reno, NV, where it was refurbished. On October 1, 2001, on the theater's 73rd birthday, the Wurlltzer was back and ushered in the beginning of a public fundraising campaign to fully restore the Tennessee.

It took years of planning and fundraising, but finally, on June 1, 2003, the Tennessee Theatre closed its doors so the work could begin.They would not only completely restore the former movie palace, but also transform it into a world-class performing arts center.

The renovation was magnificent. The building was repainted by hand, in the original colors. The twelve-foot chandeliers in the lobby were taken down and shipped off to be repaired and reassembled. Designers poured over old photos to discover lost architectural designs or flourishes in the original plans, and they were replicated. 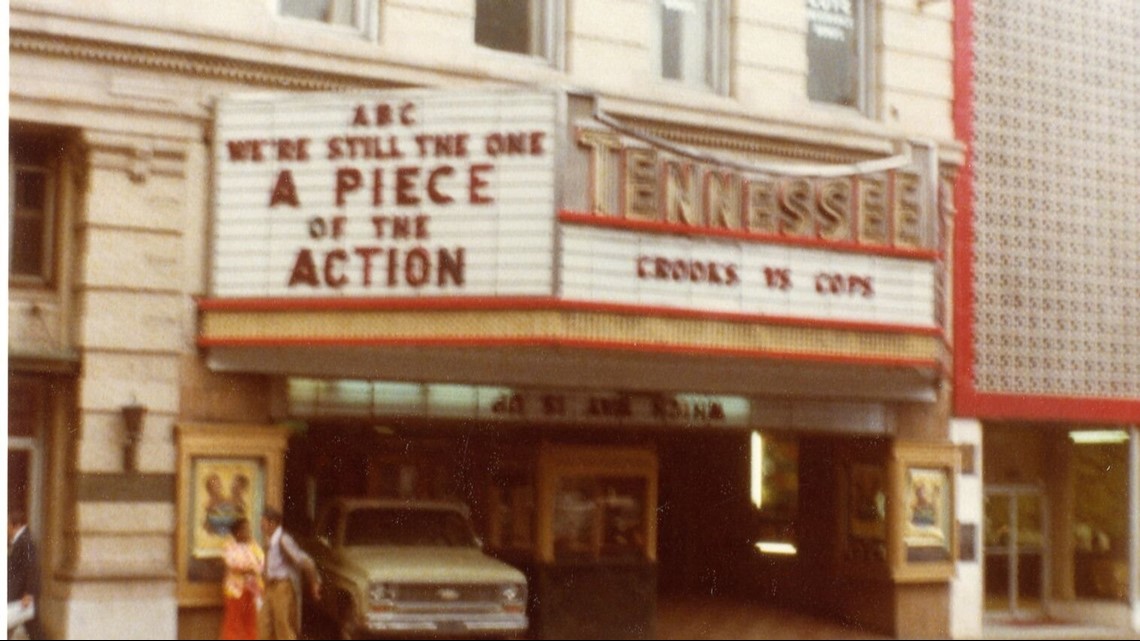 Architects also dealt with the limitations of the theater. They built an extension over State Street and included a massive lift to allow sets and other equipment to be loaded into the back door and brought up to stage level. The stage size itself was increased. State-of-the-art LED lighting was installed, and the audience area was reconfigured to add more seating.

Guests once again swarmed to the Tennessee for its grand re-opening. Some attended "The Tennessee: A Waltz Through Time," to watch local performers bring the past alive, much as the theater itself had been revived. An open house that weekend also drew more than 5,000 guests.

Since then, the Tennessee Theatre has hosted a little bit of entertainment for everyone--- from Broadway musicals to popular musicians to classic films. It's still the home of the Knoxville Opera and the Knoxville Symphony Orchestra, and has even been featured in Hollywood movies and hosted premieres.

The Historic Tennessee Theatre Foundation still oversees the mission of the venue, the Tennessee is now managed and operated by A.C. Entertainment. Its star shows no signs of dimming as the Theatre enters its 91st year.

This is a 360 video. It may not appear correctly on some mobile devices. To interact, click and drag over the video. Click here for the 360 video.

The Tennessee Theatre has 90 days of celebrations planned

The Tennessee Theatre will celebrate its first 90 years with 90 days of special events, beginning on September 29 with a speakeasy party and a gala event with bluegrass musician Allison Krause on September 30.

On the actual anniversary of opening day, October 1, 2018, there will be two special events.

The first will coincide with the usual free Mighty Musical Monday performance of the Mighty Wurlitzer. The Theatre willl honor Dr. Bill Snyder, who is retiring as the house organist after 39 years. The doors open at 11:30 a.m. and the event starts at noon. You can buy a brown bag lunch at the theater or bring your own!

That evening at 7:30, the Tennessee will host a 1928 Night at the Movies, featuring a lineup similar to the theater's early days. You'll see a vintage cartoon, take part in a sing-along, watch a vintage news reel and comedy short, and listen to the Mighty Wurlitzer. All that plus a screening of Clara Bow's "It." The event is free, but you are welcome to bring 60 cents as a symbolic purchase of a 1928 opening-day ticket.

The next weekend, October 7 and 8, the Theatre is offering behind the scenes tours. Space is limited and reservations are required, so click here to register.

You can get a complete list of events celebrating 90 years of the Tennessee Theatre here.

90 Years of Fun Facts about the Tennessee Theatre

The Tennessee Theatre’s average utility bill is $13,000 a month.

The most popular movie ever shown at the Tennessee is believed to be Walt Disney’s Snow White, which was screened in April 1938. In a one-week run, approximately 70,000 people saw the film,over 35 screenings.

The five massive chandeliers in the lobby were named for women. Four were the girlfriends of stagehands in the 1980's--- Gretchen, Angie, Molly and Windy. The fifth was named for Susie-- the woman who helped restring 37,000 crystals on the chandeliers during their first rehab in 1982.

The Mighty Wurlitzer organ is original to the building. It is rare to find a historic movie theatre with its original organ.

There are 182 doors in the Theatre.

In November 1930, after the popularity of a movie about Notre Dame Coach Knute Rockne, film footage of the Tennessee-Vanderbilt football game was featured before movies. The Tennessee is where people first see moving images of UT football, well before televised games decades later.

Concessions weren't available until the 1950s.

Get more fun facts about the Tennessee Theatre through the years here.