Knoxville bars pick up yet more citations for failing to follow 10 p.m. curfew

The city of Knoxville is seeking beer permit suspensions against Billiards & Brews and Paul's Oasis. 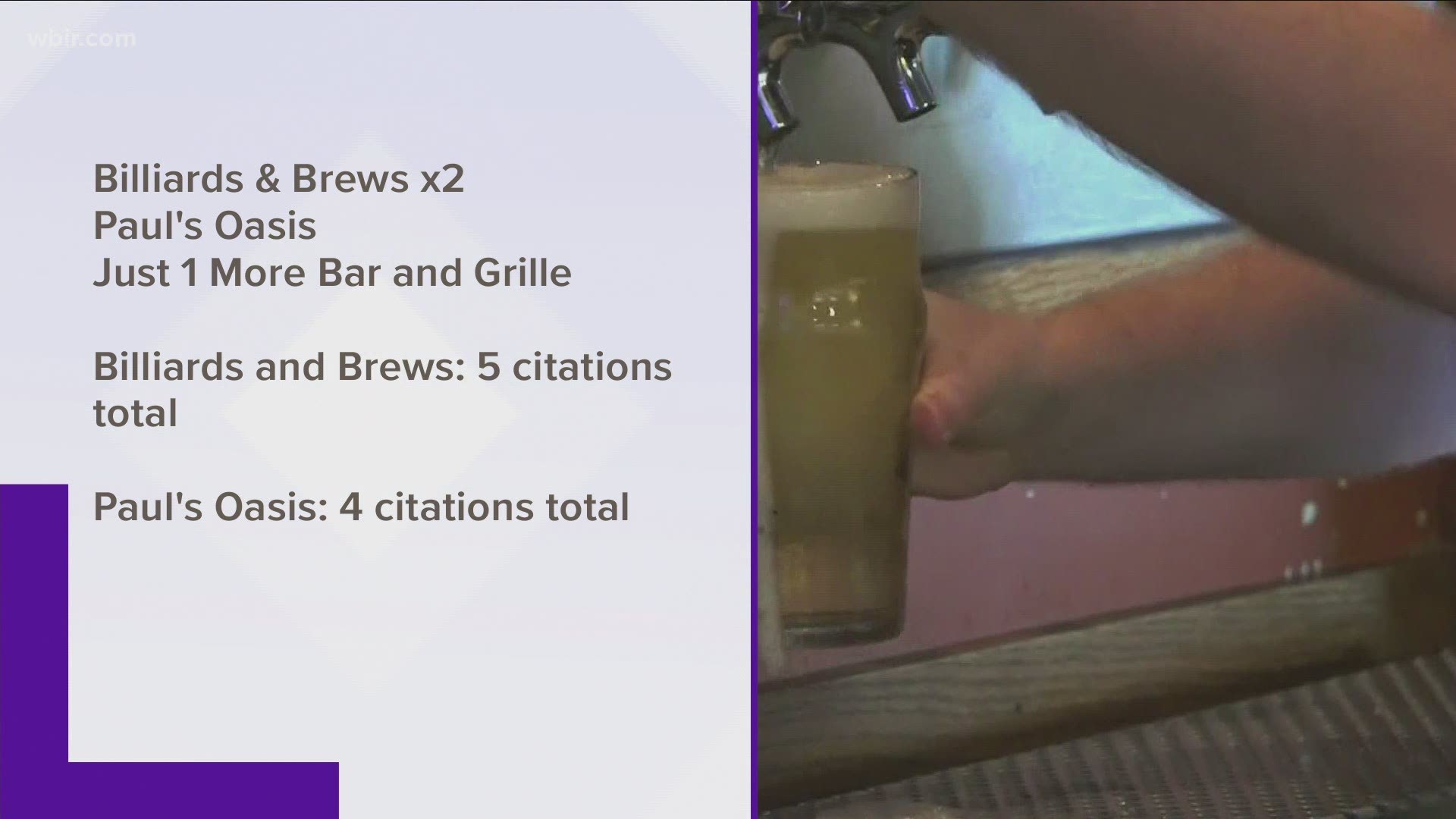 KNOXVILLE, Tennessee — Update (Monday, Jan. 11): KPD continued to issue more citations for a bar facing the threat of having its beer permit suspended for failing to honor a 10 p.m. curfew.

KPD said officers issued five citations over the weekend to bars violating the curfew to curb COVID-19's spread, saying it cited Billiards & Brews and Club XYZ on Friday and Saturday.

Billiards & Brews has now received a total of 14 citations, and Club XYZ has 3.

A pre-hearing conference with the Knoxville Beer Board on Jan. 11 has been set for Billiards & Brews.

A 10 p.m. bar closure is in place to help stop the spread of the highly contagious COVID-19. Knox County continues to see new deaths and record numbers of people in the hospital because of the coronavirus.

The Knox County Board of Health imposed the curfew, along with capacity restrictions, as a means of slowing the spread.

According to Erland, Billiards & Brews has received 12 citations for violating a city ordinance that addresses the 10 p.m. curfew. Paul’s Oasis has received eight.

For the other three businesses, this past weekend was their first time to get a ticket, according to Erland.

Pre-hearing conferences of Jan. 11 have been set for both businesses.

Billiards owner Richard Lawhorn argues he's standing up for his rights in continuing to operate his bar beyond 10 p.m.

Over the weekend, the Cotton-Eyed Joe nightclub in West Knox County staged two concerts that drew heavy crowds but was not cited by the Knox County Sheriff's Office.

Cotton-Eyed Joe operator Chuck Ward told WBIR his business is in peril if he doesn't continue to operate, health restrictions aside. Ward has previously spoken at a public forum before the Board of Health.

PREVIOUS STORY: The city of Knoxville, in newly filed complaints, is seeking lengthy permit suspensions for two bars cited for failing to comply with closure orders imposed amid the ongoing pandemic.

Non-compliance complaints filed Monday before the Knoxville Beer Board state the city wants to suspend the beer permits for at least 75 days for Billiards & Brews on Unicorn Drive and for at least 60 days for Paul's Oasis on Kingston Pike.

Brandon Lee, 30, was shot and died early Sunday hours after an imposed 10 p.m. curfew at Billiards & Brews, according to the Knoxville Police Department.

The Knox County Board of Health set the curfew to help curtail the spread of COVID-19 as the county's virus cases, hospitalizations and virus-related deaths steadily rise.

Both businesses have been repeatedly cited by KPD this month for staying open beyond the temporary curfew, records show.

Citing the current "emergency that exists in the city of Knoxville due to COVID-19" and Billiards & Brews "flagrant" violations, the city seeks a suspension as well as a fine per multiple violation, the complaint states.

The businesses had been cited earlier in December for non-compliance. Monday's action adds new instances in which the businesses failed to follow the curfew in recent days.

Fines to be imposed are up to a city hearing officer, according to Vreeland.

"The amount would fall within the discretion of the hearing officer, though the City did suggest $3,000 per complaint in a previous version of the complaint," he said in a note to WBIR.

The beer board is comprised of City Council members. They have the power to issue and take away beer permits.

Pre-hearing conferences of Jan. 11 have been set for both businesses.

KPD said Monday investigators were still looking into Lee's homicide. He was found shot outside the bar. No gunman had been identified.