City of Gatlinburg, distilleries team up to control free samples

Moonshine distilleries are teaming up with the city of Gatlinburg to up their efforts in controlling free tastings. 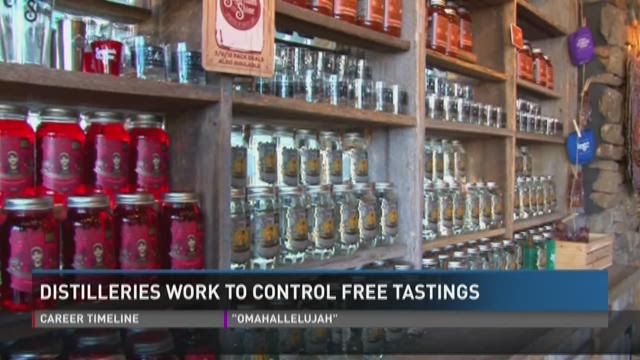 Moonshine distilleries are teaming up with the city of Gatlinburg to up their efforts in controlling free tastings.

Sugarlands Distilling Company said the moonshine hubs have even gone so far as charging for samples to prevent over-serving.

“The city and all the distilleries have agreed to try that on a temporary basis – twice so far this year – to evaluate what it did for business, what it did for over-sampling, and just try to come to a conclusion about what would be the best policy,” Sugarlands Distilling Company President Ned Vickers said.

Vickers said this method didn't affect business much, but took a hit at the welfare of his state certified sample servers.

“It did curb over-sampling some," he said. "It also really didn’t impact our business one way or the other except that it hurt the tips our servers got significantly.”

But some of the distillery's 800,000 visitors a year said charging for tastings could still be damaging.

“I think it’s pretty well regulated," David Prater said. "They ask you for your ID, and they check everything, so you know, I mean responsible adults will know what to do. Sampling is a sample. I’ve never heard of a sample that you were charged for.”

“I think it’s helpful to the business," David White said. “If we want to drink it, whether we pay for it or not, we’re going to get it if we want it.”

Vickers also said tastings are crucial to moonshine business, allowing people to decide what flavor they like before buying. But it's not a free for all.

“We impose limits of 9 samples during the day, 4 samples after 9 p.m." he said. "We also limit people to sampling one time per day.”

With four distilleries in Gatlinburg, and 35 in the state of Tennessee, city officials reported distilleries helped rack up nearly $5 million in liquor revenue since 2009, when distilleries became legal.

The business is in such flux, it's catching the attention of state lawmakers as well.

Senate Bill 2096 aims to clarify what manufacturers are allowed to handle on their premises, and how much they're allowed to serve.

“There are some distilleries in the state that are mixing their product into a small sample of a cocktail," Vickers said. "Well, the ABC has taken the opinion that that’s not allowed, so we’re just trying to get some clarity on that."

“In addition to that, there have been some limits in that bill that we’ve agreed on to put on the amount of sample of any given product that someone can get," he said. "So the limit I believe in the bill right now is half an ounce per product, which is roughly the equivalent of a third of a shot.”

That bill has passed in the Senate, and is waiting on approval from the House.

Vickers said distilleries will continue working with city and state officials until they find a middle ground.

“What will make people feel more comfortable is making sure that there aren’t people being over-served," he said. "I mean, that’s the key. It’s fine to go out and have fun, but you don’t want people to go out into the city then and not be at full capacity.”