City of Knoxville Office on Homelessness Program Coordinator Michael Dunthorn said the city does not sanction "tent cities," but they are working with several agencies to help the city's homeless population. 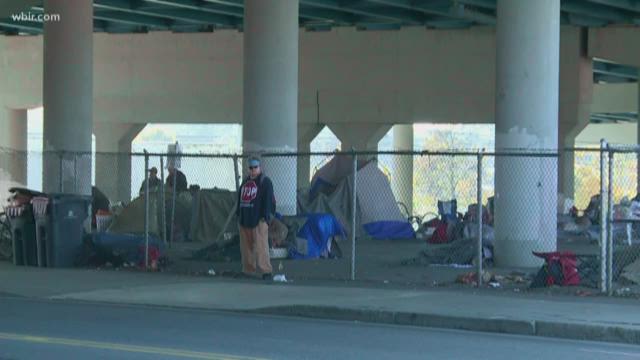 If you drive north of downtown on Broadway, you'll notice about a dozen tents pitched under the I-40 overpass.

People live there, and city leaders are working to address the issue.

People who spend time in the area say the tents appeared just in the last few weeks. They say people often go to nearby Knoxville Area Rescue Ministries (KARM), the Salvation Army and other organizations, and sometimes they stay out by the bridge.

If you drive into downtown Knoxville on North Broadway, you'll notice about a dozen or more tents underneath the I-40 bridge. People live there. The city is working to help these people connect with the resources they need to get off the streets.

"They just got used to being out here," said Gaylene, a woman who said she has lived in the area in the past. "I mean, they are humans and they are adults."

Next to the bridge is Ray's World Famous Market & Deli. The person managing the store early Tuesday afternoon said he did not want to go on camera, but said he has seen drugs and violence occur under the bridge and near the store.

He said he only lets one customer come in his store at a time. He said he wants the city to come up with a solution.

City of Knoxville Office on Homelessness Program Coordinator Michael Dunthorn said the city does not sanction "tent cities." He said the city takes the homeless issue seriously and said it's complex. The city works with agencies like KARM, Salvation Army, Helen Ross McNabb Center and more to help the people on Broadway.

"We're all trying to keep our focus on fixing the long-term problem, so affordable housing, get the resources that will actually help the people get off the streets," Dunthorn said.

In September, the Knoxville City Council approved $500,000 to either build or expand the courtyard that KARM has. The city believes this would provide a place for people to stay during the day, instead of on the sidewalks or under the bridge.

Meanwhile city leaders and people living near the bridge hope people think of them.

"These are people, these are human beings, they are members of our community," Dunthorn said.