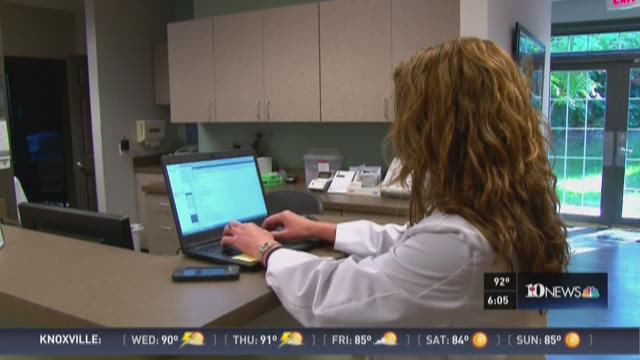 A growing physician practice is popping up around Knoxville.

Dr. Raye-Anne Ayo has been offering concierge-styled services to her patients for years, but she's officially turning her practice into membership only.

“The word concierge has a connotation of being overly-priced or too exclusive, if you will," Dr. Ayo said. "It’s really supposed to be something that families can afford, maybe through a little bit of reallocation."

She makes herself available 24 hours a day, giving patients a direct line to her personal phone.

“I don’t mind it ever to answer a call at two or three in the morning and say, you know, 'My baby has a cough, what’s going on? I’m feeling short of breath, what’s happening?'” she said.

“I’m embarrassed to admit the number of times I’ve texted her, ‘Okay, so is this poison ivy, or is this something serious?’” Traci Van Dorselaer said.

Van Dorselaer said being a member of the practice gives her more time with the doctor, and less waiting for an appointment.

“I pick up the phone, I call and I get in that day," she said. "Not only that, but it’s not going to be hang out in the waiting room for 30 minutes to 45 minutes, sit in an exam room for another 20 or 30 minutes, maybe get 10 minutes with the doc and then go on home.”

Before Dr. Ayo transitioned to membership medicine, she saw 25 patients or more per day.

“We get maybe 10 to 15 minutes to do our full job, to do a full physical," Dr. Ayo said. "It’s not enough time to answer questions, to go over how you’re sleeping, how your mood is, what you’re eating."

She said with a full concierge practice, she will limit her number of members to 400 patients. She said it will help her do a more thorough job, seeing patients for at least 30 minutes at a time.

"I’ll get to see like six, eight maybe, maximum 10,” she said. "Most physicians deal with several thousands of patients."

"I'd like it to become more of the standard," she continued. "I think that people should understand that there's a better way to deliver healthcare than just a five-minute conversation."

At her practice, Family Health Center, PLLC, individual members will pay $1,650 per year. Couples and families will pay $3,000 per year. That cost is on top of additional insurance fees.

"For me to have my yoga membership at the studio, I'm paying more for that on a monthly basis than I am for concierge medicine," Van Dorselaer said.

And Traci said she is already seeing her health improve.

“It is such a deep dive keeping me healthy that, overall, my health is a heck of a lot better because I’m paying attention to things I would have never thought to look at," she said. "Because she took the time in a physical and identified some maybe things I didn’t even know I had, I’m addressing them, and I’m not going to have a chronic health condition long-term because I nip it in the bud early.”

Dr. Ayo is officially transitioning to a full membership practicing starting tomorrow. She will have a nurse practitioner available for new patient consultations like a general practice just in case someone isn't ready to take on a full concierge services.