The Confederate monument in the Fort Sanders neighborhood was damaged by blue paint. 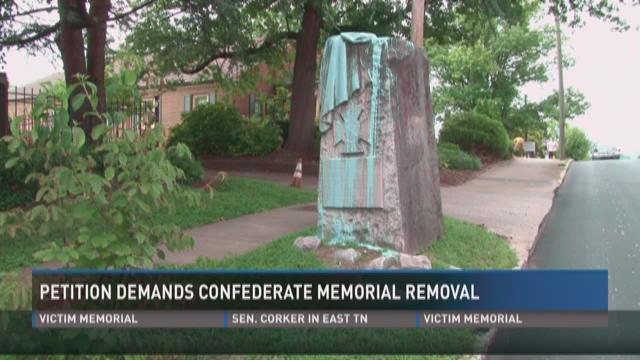 A monument to Confederate soldiers in the Fort Sanders community near the University of Tennessee was covered in blue paint on Wednesday, as a petition gathers signatures to remove it.

The monument, erected at the corner of 17th Street and Laurel Avenue, was placed by the Daughters of the Confederacy in 1914 to commemorate the Confederate soldiers who died in the Battle of Fort Sanders on Nov. 29, 1863.

The petition was started by Ben Allen, who asks that Mayor Madeline Rogero "remove the monument to secessionist, Confederate occupying forces" immediately. He calls it an "eyesore inducing honors to inhumanity."

1 / 4
Confederate monument in the Fort Sanders neighborhood was covered in blue paint.

"Knoxville must stand up to white supremacy and remove these monuments that have provided spirit in enabling neoconfederates and alt-right to collaborate in terror tactics across the south," he wrote.

The vandalism comes three days after a “Unite the Right” rally turned deadly in Charlottesville, Va. Alt-right demonstrators, white nationalists, and Neo-Nazis were protesting the planned removal of a statue of Confederate Gen. Robert E. Lee.

An empty paint can sat in the grass near the monument.

Knoxville Police said no complaint had been filed about the vandalism.

"We have read the petition and we definitely understand the concerns of those who have signed it," said Jesse Fox Mayshark, the Sr. Director of Communications and Government Relations for the city, in a statement. "To be honest, none of us in the Mayor’s Office were even aware of the monument, even though we have probably walked or driven past it thousands of times. We’re researching the history and legal details of its ownership."

Mayshark pointed out a state law that forbids the city from unilaterally removing a monument that is located in a public right of way without a waiver from State Historic Commission.

"We won’t make any decisions about this until we have all the information about our options," he said.

Mayshark invited the community to let them know what they think about the monument by emailing them at communications@knoxvilletn.gov.

In an email to fellow council members and city officials, Knoxville City Councilman Nick Della Volpe said he believes the monument should be left alone.

"A society that ignores its history is doomed to repeat the failures of the past. Let the pro-ignorance coalition stew in their own close-minded juices. The monuments should stand," Della Volpe wrote in the email, which he shared with 10News.

"Moreover, Thousands of Tennessean's died fighting on both side of the civil war. Remembrance of the horror and their sacrifice hopefully keeps us from going down that destructive path again," he said.

A counter petition has also been started to keep the monument. As of 11 p.m. Wednesday, it had 33 signatures.