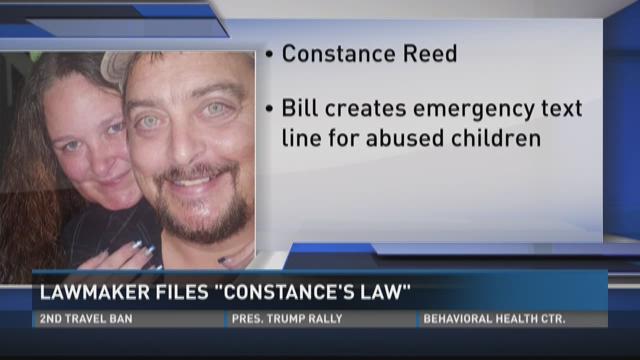 A West Virginia state senator filed a bill Wednesday that would honor Constance Reed, a wife and mother who lost her life alongside her two daughters during the fires in Sevier County.

Senator Sue Cline introduced Senate Bill 546, which would create an emergency text number system in West Virginia for children who are abused. It would be called "Constance's Law."

Michael Reed, Constance's husband, shared the good news on Facebook by posting "To God be the glory!!"

He added, "Thank you everyone for your support, prayers, encouragement, donations, hugs, letters and love. Without all of you, this would not be happening. Constance and our girls are looking down on us smiling from ear to ear. I thank all of you from the bottom of my heart."

Before her death, Constance disclosed she was abused as a child.

Michael Reed wants to continue his wife's legacy with "Constance's Bill," a plan that would include a nationwide text line for children to use to reach law enforcement officers day or night.

"If he helps one child, to avoid that, what a miracle that would be," Grant Reed, Michael Reed's father, told WBIR 10News last month.

"I can't imagine. I can't even put myself in his shoes. He wants to make something good out of something awful that happened and we are going to work with him to see if we can make that happen," Roe said.