The Tennessee Bureau of Investigation will be featured for a year at the Alcatraz East Crime Museum in Pigeon Forge. Its display opened Monday. 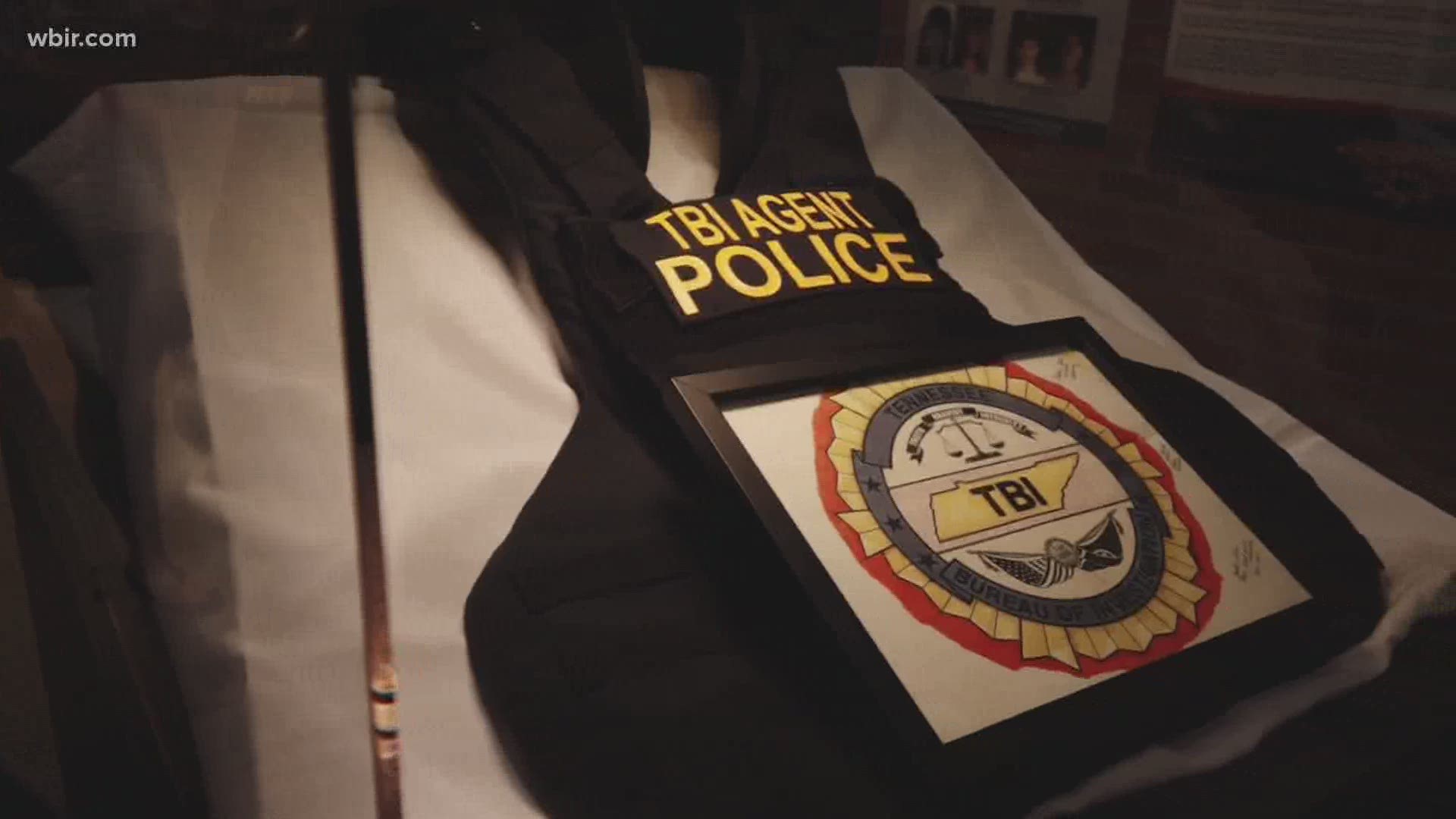 PIGEON FORGE, Tenn. — The state's all-business investigative agency is going a bit show business, enjoying the spotlight in a featured exhibit at a private Pigeon Forge museum that explores the history of crime in America.

The Tennessee Bureau of Investigation will be featured for a year at the Alcatraz East Crime Museum, 2757 Parkway, said museum COO Janine Vaccarello.

Visitors to the TBI's second-floor exhibit will learn about its history, including how an unsolved murder led to its professional growth, the loss of an agent in the line of duty in 2016 and a nearly six-year-old murder case the agency still is working in which the Campbell County victim's body never has been found.

TBI Director David Rausch told 10News on Monday during the opening that it's a unique way for the TBI to let the public know more about what it does. When the idea of featuring the TBI in the museum arose, the agency discussed the merits at length.

"It's critical for those who live in this great state to have an understanding of who the bureau is, where the bureau started and what the bureau does for our communities," said Rausch, former chief of the Knoxville Police Department.

Credit: WBIR
TBI Director David Rausch at the unveiling of the TBI display at the Alcatraz East Crime Museum in Pigeon Forge.

The museum's standing exhibits range from primers about forensic technology, including breakthroughs in fingerprinting created by a KPD veteran to a Volkswagen once owned by serial killer Ted Bundy and a 1993 Ford Bronco that carried alleged killer and former football star O.J. Simpson during a low-speed chase from California authorities in June 1994.

Admission is $27 for adults but there are several price variations depending on a person's status. The museum is open 10 a.m.-9 p.m. daily and observing several precautions because of COVID-19.

Rausch said the TBI exhibit, a year in the making, is an opportunity to reach the public in ways that typically aren't available. While the TBI takes the lead in dozens of homicide investigations and officer-involved shootings every year, there's no central place beyond its website where the public can learn more about its history and people.

Credit: WBIR
The TBI display at the Alcatraz East Crime Museum in Pigeon Forge. The display will remain up a year.

Monday's new exhibit includes the backstory of how the TBI went from a sparsely staffed and often over-matched department in the mid 20th century to a fully realized agency that can handle anything from mass killings to drug and arson detection to human trafficking.

"There are some cases people will read at the exhibit that are unsolved," Rausch said. "Maybe people will come through and have knowledge and read it and reach out."

Those cases include that of J.T. Lutz, a rural Greene County man who was shot to death in December 1949 while spending a quiet evening at home with his family. Seventy years later, the case remains unsolved.

WBIR has featured their story as part of its ongoing "Appalachian Unsolved" TV series and podcast. The WBIR TV story is part of the display.

Another case under the spotlight: the December 2014 killing of Rhonda Daugherty of Campbell County. Lonnie Vann, a former middle school teacher, pleaded guilty a year later to her death, but her body never has been found.

Vann, now serving time at a Clifton, Tenn., prison, led the TBI to a spot on Norris Lake where he said he disposed of her body. Despite repeated efforts with numerous pieces of electronic equipment and technology, Daugherty's remains have not been located, said TBI Special Agent Brandon Elkins, who attended Monday's unveiling.

Credit: WBIR
Lonnie Vann has admitted killing Rhonda Daugherty in 2014. Her body has yet to be recovered, however.

"There is not a technology that exists that we have not tried at that location," Elkins said.

The TBI will keep working to find Daugherty, he said.

The museum exhibit also gives the TBI a chance to honor its own, including a man killed in the line of duty. Special Agent De'Greaun Frazier was shot and killed in August 2016 while working undercover in Jackson, Tenn.

His widow, Shannon Frazier, traveled to Pigeon Forge on Monday along with family members to see the exhibit. Frazier said she approved.

"I think it’s awesome," she said. "Anytime someone wants to honor or pay tribute to my husband and keep his memory alive is an honor and I'm grateful for everyone who prays for us and keeps us in their hearts and minds and shows us love through things like this exhibit here in this museum."

Frazier is the only agent killed in the line of duty, Rausch said.

While the TBI has no museum of its own, the ongoing Alcatraz exhibit underscores that there could be a value in one, the director said. KPD, Rausch's old department, has an extensive, internally run museum at its current headquarters on Howard Baker Jr. Avenue that will carry on once KPD moves to its new home on the grounds of the old St. Mary's Hospital in North Knoxville.

"There is the potential for somewhere to highlight the history of law enforcement in our great state," he said. "There are some great stories of our institutions that go untold."

Crimes that live in infamy

The two-story museum itself looks at all aspects of crime in the United States.

Second-floor displays include one about Dr. Bill Bass, the founder of what's now commonly known as the "Body Farm," a groundbreaking research center about decaying corpses near the University of Tennessee Medical Center. KPD's retired fingerprint expert, Art Bohanan, also is featured in panels about fingerprint techniques and developments.

Credit: WBIR
A sculpted likeness of 1971 mass murderer John List, created in the late 1980s to help in the search for the fugitive.

The museum also highlights notorious criminals such as John List, the New Jersey man who murdered five members of his family in 1971 and then vanished. He was captured years later, helped in part by creation of a sculpture that showed what he might look like as an old man. Visitors can see the sculpture at Alcatraz East.

Several vehicles share prime display space on the first floor of the museum.

There's a 1930s model getaway Ford used in the 1967 movie "Bonnie and Clyde" that replicates the vehicle in which the notorious outlaws were ambushed and killed in Louisiana.

Alcatraz East also has a 1933 Hudson Essex-Terraplane once owned by former Public Enemy No. 1 John Dillinger.

There's also a 1960s VW Beetle once owned by serial killer Ted Bundy. The museum's VW dates to his time in the Seattle,  Wash., area. Bundy drove another VW at the time he was caught in Florida in the 1970s. Florida eventually executed him.

Credit: WBIR
The white Ford Bronco owned and driven by Al Cowlings and occupied during a 1994 police chase by his friend and murder suspect O.J. Simpson.

Visitors to Alcatraz East also can see the white Ford Bronco that Al Cowlings used to drive O.J. Simpson in a 1994 chase along Los Angeles freeways days after the murders of his former wife Nicole Brown Simpson and her friend Ronald Goldman. Someone stabbed the victims to death in June 1994 outside Nicole Simpson's home.

Simpson is widely assumed to have been the killer, although a Los Angeles jury acquitted him in 1995.

Before Simpson's arrest, Cowlings led police in a two-hour pursuit, with Simpson riding in the Bronco's back, that was broadcast live across the nation. Cowlings owned the vehicle.

Simpson wound up at his Brentwood home, where he agreed to be taken into custody.