The Pennsylvania Department of Environmental Protection is joining a regional coalition of states. Once in, PA will implement a carbon trade program with neighbors 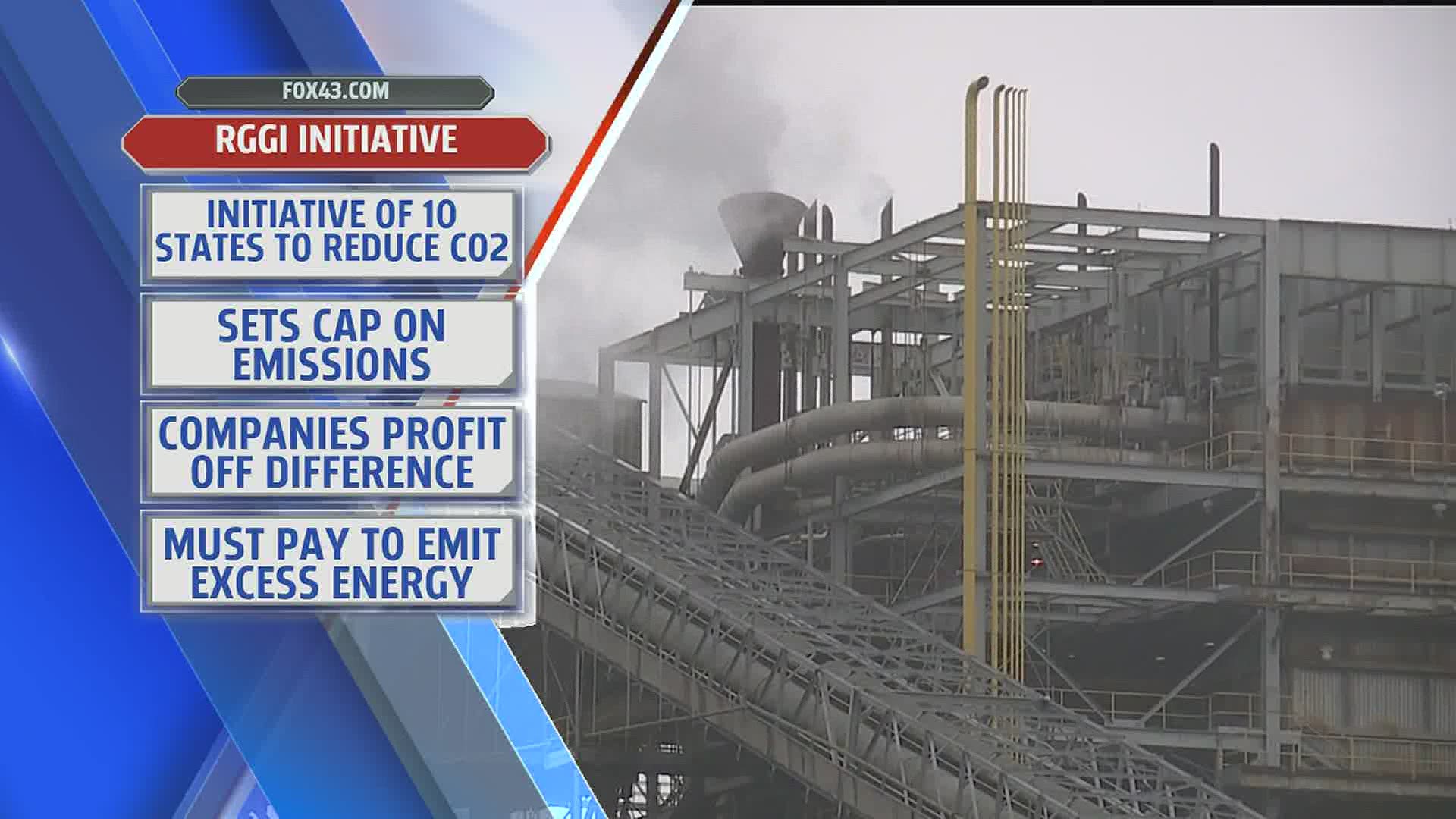 HARRISBURG, Pa. — Officials with the Pennsylvania Department of Environmental Protection released preliminary draft regulations to allow the commonwealth to participate in the Regional Greenhouse Gas Initiative, or RGGI.

Pennsylvania is the first major fossil-fuel producing state to join RGGI, and its entry into it would mark the programs largest expansion since its launch in 2009 because the state is the second-largest producer of natural gas in the United States and the third-largest producer of coal.

The guidelines are part of a broader plan by Governor Tom Wolf to reduce CO2 emissions from coal-fired power plants and make Pennsylvania's air healthier. To do that, Pennsylvania is getting involved with RGGI to create a carbon trading program similar to cap and trade.

DEP's plan lays out how it will design a cap and invest program for the state. Under a typical cap and trade program, the government issues a number of annual permits, or allowances, so power plants and other companies can only emit a certain amount of CO2 each year. The total amount of CO2 allowed becomes the "cap" on emissions.

So, if a power plant produces more CO2 emissions than it's allowed, it gets taxed. This way, companies can sell or trade their unused permits to any company in the RGGI, so long as it reduces its own emissions.

Each subsequent year, the government lowers the number of permits it issues. So, the total emissions cap is also reduced to make the permits more expensive. The idea is to incentivize companies to invest in clean, renewable energy technology because it would eventually become cheaper than cheaper than buying permits.

What makes a "cap and invest" model standout: the state can invest the money it gets from permit auctions into air pollution reduction programs, and other environmental initiatives. Pennsylvania is expected to generate millions of dollars from these permit auctions.

"As the Governor says, climate change is the most important environmental issue we face as a commonwealth" Secretary Patrick McDonnell told FOX43. "So, looking carbon emissions from the power sector is one of the critical strategies we have for starting to address climate change both from a mitigation standpoint, 'how do we bring down our greenhouse gas emissions,' and 'also how do we adapt to a changing climate?'"

As Pennsylvania takes action to offset the worst potential effects of climate change, record high temperatures are being set all over the world. The general consensus among the scientific community is rising greenhouse gas emissions are directly responsible for this.

This comes after the warmest January on Earth was recorded this year.

On Thursday, satellite images from the European Space Agency shows a 116 square-mile iceberg that broke off the Pine Island Glacier, that's on the edge of Antarctica. The iceberg is about the same size as the city of Atlanta, Georgia.

The Antarctic peninsula is one of the fastest-warming regions on the planet, and temperatures have risen by five degrees Fahrenheit over the last 50 years.  Climate Central Projection, an independent organization that focuses on climate change, predicts parts of New York City would be underwater if the Earth warms up by seven degrees Fahrenheit.

If emissions continue unchecked, nearly 700,000 square miles of the planet, or more than three times the size of California, would be lost to the sea. While projections don't show Pennsylvania becoming the next Atlantis, the health, weather, and social repercussions would be directly felt in the Commonwealth.

The ultimate goal of joining the RGGI is to reduce greenhouse gas emissions in Pennsylvania by 80% from 2005 levels over the next 30 years. The more immediate goal is to reduce those emission levels by 26% by 2025.

One item in the DEP preliminary draft that merits attention is how CFB power plants that burn waste coal would benefit from the cap and invest program.

When power plants burn coal, there are several kinds of waste, or waste coal, left over from it, and waste coal plants burn it for electricity.

Waste coal is considered an alternative source of energy in Pennsylvania. It's listed as a Tier II resource under the Pennsylvania Alternative Energy Standards Portfolio Act.

Because of Pennsylvania's historically prominent role in anthracite and bituminous coal production in the 19th and 20th centuries, there are massive piles of waste coal in Northeastern and Western Pennsylvania. That's not good, because it can seep into the ground water supplies and hurt people's physical health.

According to the National Resources Defense Counsel, short-term exposure to waste coal can irritate the throat and nose, cause dizziness, nausea, vomiting, and breathing problems. When exposed to it for long periods of time, people can develop kidney damage, liver damage, and even cancer.

The state itself is home to 15 of the 18 waste coal plants in the country. So, there's plenty of potential energy from waste coal.

Under the terms of the DEP preliminary draft, permit auction proceeds could be invested in Waste Coal-Fired Units. The DEP Power Point presentation displayed in Harrisburg Thursday morning shows plants that meet the definition of a Waste Coal-Fired Unit would be considered qualifying facilities for permit auction proceeds, as they would meet the same eligibility criteria for the PA Coal Refuse Energy and Reclamation Tax Credit Program.

Other states in the RGGI are using their permit auction proceeds differently. Rhode Island, for example, primarily invests the proceeds in renewable energy technologies,  and energy efficiency and conservation.

Maine state law requires the Maine Public Utilities Commission to use the proceeds in its RGGI trust fund to reduce electric rates for businesses in the vacation state.

But investing in waste coal plants could be just as good for the RGGI's bottom line as the other states' investments.

Since 1988, more than 160 million tons of waste coal have been used for co-generating electricity. In total, 71 million cubic feet of waste coal has been removed for that purpose, opening up 3,700 acres of land for reuse and redevelopment.

In doing so, the areas where the waste coal piles were have become safer for people and the ecosystems.

That being said, there are also major problems associated with burning waste coal. According to the Energy Justice Network, can take up to twice as much waste coal to produce the same amount of electricity as what it was burnt from, originally. Basically, if you burn a ton a anthracite coal, for example, you would need to burn nearly two tons of anthracite waste to meet the same energy output.

The problems associated with burning all of that waste coal are found in the remaining waste coal ash. The mercury and other toxic particulates captured by the plant's pollution control equipment when burnt ends up in the ash, making it far more toxic than coal or waste coal.

In 2017, environmental researchers with Waterkeeper Alliance found high levels of heavy metals from coal ash dumps in the Susquehanna River next to the Brunner Island Steam Electric Station in East Manchester township, York County. After investigating, they found the company disposed of coal ash waste for years in seven unlined ponds and a lined landfill.

"In time, those heavy metals and everything that is in that ash settles to the bottom and then that water is flushed into the river through an outfall," Ted Evgeniadis, the Executive Director of the Lower Swatara Riverkeeper Association, told FOX43.

"What's happening is these contaminants get into our water, it's poisoning the fish and other wildlife and then god forbid if it poisons anyone that eats that fish."

After taking the plant's owner, Talen Energy Corp., to court, a U.S. Judge approved a consent decree requiring Talen Energy to pay a $1 million penalty to the state. That's the largest penalty ever for coal and ash pollution in Pennsylvania.

The regulations are still in the early planning stages. The next step is a draft proposed regulation, as required by the governor’s Executive Order, to be presented to the Environmental Quality Board on July 21. If all goes according to plan, the cap and invest program will be in effect by Fall 2021.