The brutally cold temperatures take a toll on an invasive insect in the Smokies that has killed millions of hemlock trees in the United States. 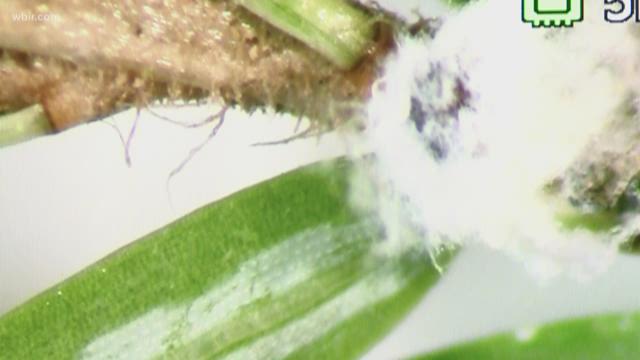 Biologists in the Great Smoky Mountains say there is a bright side to the recent spell of frigid temperatures. The deep freeze is a life-saver for some of the mightiest hemlock trees in the Smokies.

"Definitely, these cold extremes help with the invasive hemlock woolly adelgid," said NPS forester Jesse Webster. "It will not get rid of them completely, but we will take every bit of help we can get."

The hemlock woolly adelgid (HWA) invaded the Great Smoky Mountains National Park in 2002. The tiny insect from Asia has killed millions of hemlock trees in the Eastern U.S. The pest gets its name from the white woolly coating that surrounds and protects the nymphs while they feast on hemlock trees in the winter.

"Adelgids are a little bit of a different insect. They are completing a lot of their life cycle during the winter. Most insects are not active in the winter," said Webster. "But it can get too cold for them. They have not survived as well in the northern parts of the country. You start seeing mortality when it gets around 4 or 5 degrees Fahrenheit."

The HWA thrived for more than a decade after its arrival in the Smokies as the region experienced more than a decade of relatively mild and dry weather. Mother Nature finally fought back in 2014 with a freeze too harsh for the insects' woolly protection to endure.

"The big 'polar vortex' blast in 2014 and 2015 really helped us out with the adelgid. We had those prolonged weeks where the temperature was below zero in the higher elevations and killed a lot of them," said Webster.

Jesse Webster, NPS forester, stands next to a large hemlock tree in the Great Smoky Mountains.

However, the hemlock-killing bugs have been able to rebound the last couple of winters.

"With the drought we had last year, we saw a big population increase in adelgid. It's a give and take with forest health," said Webster. "We really can benefit from some hard freezes in dry weather. Snow and ice can insulate insects. When they are directly exposed to the extremely cold air, that's when their mortality rates are really high."

The national park is able to treat some hemlocks with chemicals, but terrain only allows crews to reach 15 percent of the hemlocks in the Smokies. Predatory beetles were also introduced to combat the HWA and have brought some balance to the pest population.

A tall stand of hemlock trees in the Great Smoky Mountains National Park.

The hemlock trees are vitally important as a keystone species that regulates temperatures throughout the forests. Hemlock canopies provide shade in the summer, insulation in the winter, and keep streams at a temperature necessary for native species of aquatic life.

"When we lose these trees, it's not just the hemlocks we're losing. It's the other species that rely on these trees. Some of these individual trees are 200, 300, 400 years old. That's one of the reasons the park is so concerned about Hemlocks and putting so much effort into saving them," said Webster.

Funding to save hemlock trees has come from the nonprofit Friends of the Smokies. The group purchased the sprayer truck used to treat hemlocks with chemical protection from the HWA. The national park has been able to establish more than 100 conservation areas where hemlock trees are treated, managed, and given long-term protection from pests and other threats. Many of the hemlock conservation areas are at campgrounds and picnic areas in the national park.