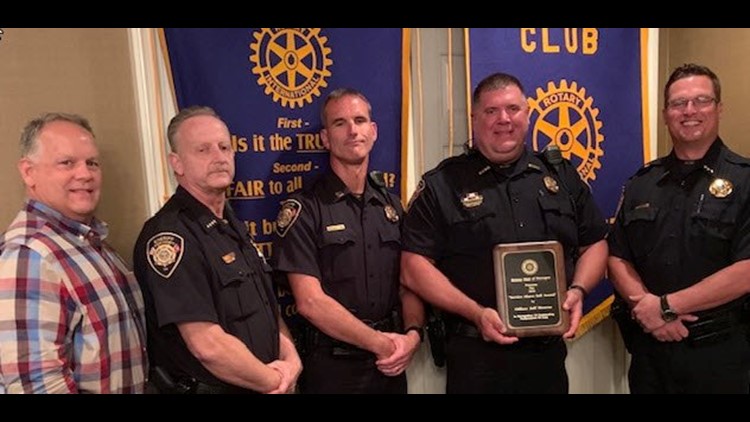 Photo by: KCSO
Brad Hall of KCSO shown in a recent photo with Bernie Lyon and other KCSO personnel.

KNOXVILLE, Tennessee — A veteran Knox County Sheriff's Office captain has withdrawn his appeal of a demotion after agreeing to an unspecified "offer" from the county, records show.

The board was set to hear his case Wednesday. But documents signed Wednesday and filed with the council show he'd decided after negotiations with the county to drop a grievance of his demotion from associate chief deputy by Sheriff Tom Spangler.

Hall "has accepted an offer from Knox County" in the case, documents state. It's not clear what the offer entails, but it's now a "binding contract," according to the documents.

A decorated investigator with nearly 30 years of experience at KCSO, Hall also has had a bumpy past with his employer. Records show he's quit twice, only to come back after a short time.

He was demoted in August after a drunken incident in April in the Old City while he was off duty.

A department investigation found that Hall tried to drive away in his department vehicle, although he contends he didn't want to drive it and only wanted to rest in it.

KCSO Lt. Denny Scalf, also off duty at the time, tried to stop Hall, records state, and the old friends scuffled. Hall's wife sought help from department communications chief Kimberly Glenn because they were old friends and Glenn and her husband, Jerry, an arson investigator, ended up going down to the Old City.

Glenn also called Capt. David Amburn that night because Hall was driving a vehicle that was part of the narcotics fleet Amburn oversees.

Hall, promoted in early May to chief of detectives, was bumped back down Aug. 20 to captain and moved to the juvenile division. Scalf was moved to warrants and suspended for two days without pay.

In withdrawing his appeal, Hall also agreed to release the county from any claims.

He continues as a KCSO captain, the release states. Hall was a respected major crimes investigator for many years.

"No monetary payment will be made to (Hall), and each party will bear their own costs and attorneys' fees," the release states.

There's no admission of fault in resolving the dispute, records state.

As a result of the department's investigation, Kimberly Glenn got a written reprimand. Glenn's husband, Officer Jerry Glenn, and KCSO Capt. David Amburn, got verbal reprimands.