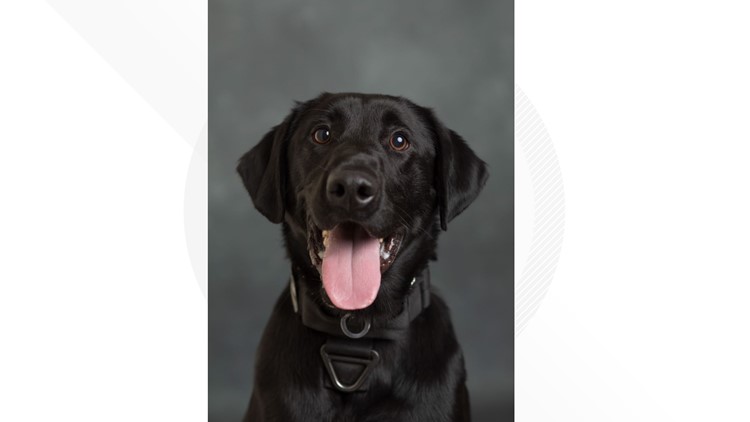 KNOXVILLE, Tenn — This month, the University of Tennesee Police Department welcomed a new K-9 to its team.

Kale, a 2-and-a-half-year-old pup, is certified in explosives detection.

According to a UTPD release, he is the department’s first black Labrador. He joins UTPD’s three other K-9s—Bruno, a German shepherd certified in drug detection and apprehension, and Athena and Tica, both Belgian Malinois certified in explosives detection.

He replaces Bira, a Belgian Malinois who retired from the department this summer after 6 years of service, according to UTPD.

UTPD said Kale is paired with Officer Kaylyn May and trained with her for four weeks this summer at Iron Heart High-Performance Working Dogs in Pomona, Kansas.

“From the first day I met him, he jumped on me. We had to fix that problem so he isn’t jumping on Grandma at a football game,” May said with a laugh. “But he’s just a friendly happy-go-lucky dog. Very personable. And he loves to work for his ball.”

May, who joined UTPD in May 2018, is assigned to a night shift squad, and Kale will patrol with her when he’s not working special events, according to the release.

May said Kale’s high energy is a good match for the young adults who largely make up UT’s student body.

“His personality can also be comforting to most students. If we’re out on campus and meet someone having a bad day, perhaps his personality and mood will help that person,” May said.

And just how does a police dog happen to be named for a vegetable?

According to the release, his original family gave him the name Kale but spelled it Kael, May said. She simply flipped the E and the L.

“I initially wanted to change it completely, but it grew on me,” May said. “He answers to it. It’s kind of cool.”

RELATED: Meet Kato, the search and rescue K-9 of the Smokies

RELATED: LCSO K-9 receives special vest to keep him safe in the line of duty