The annual "light show" of synchronous fireflies in the Great Smoky Mountains normally sizzles, but experts say this year's display fizzled due to the ongoing demolition of cabins at Elkmont and the extreme drought of 2016 that parched lightning bug populations across East Tennessee. 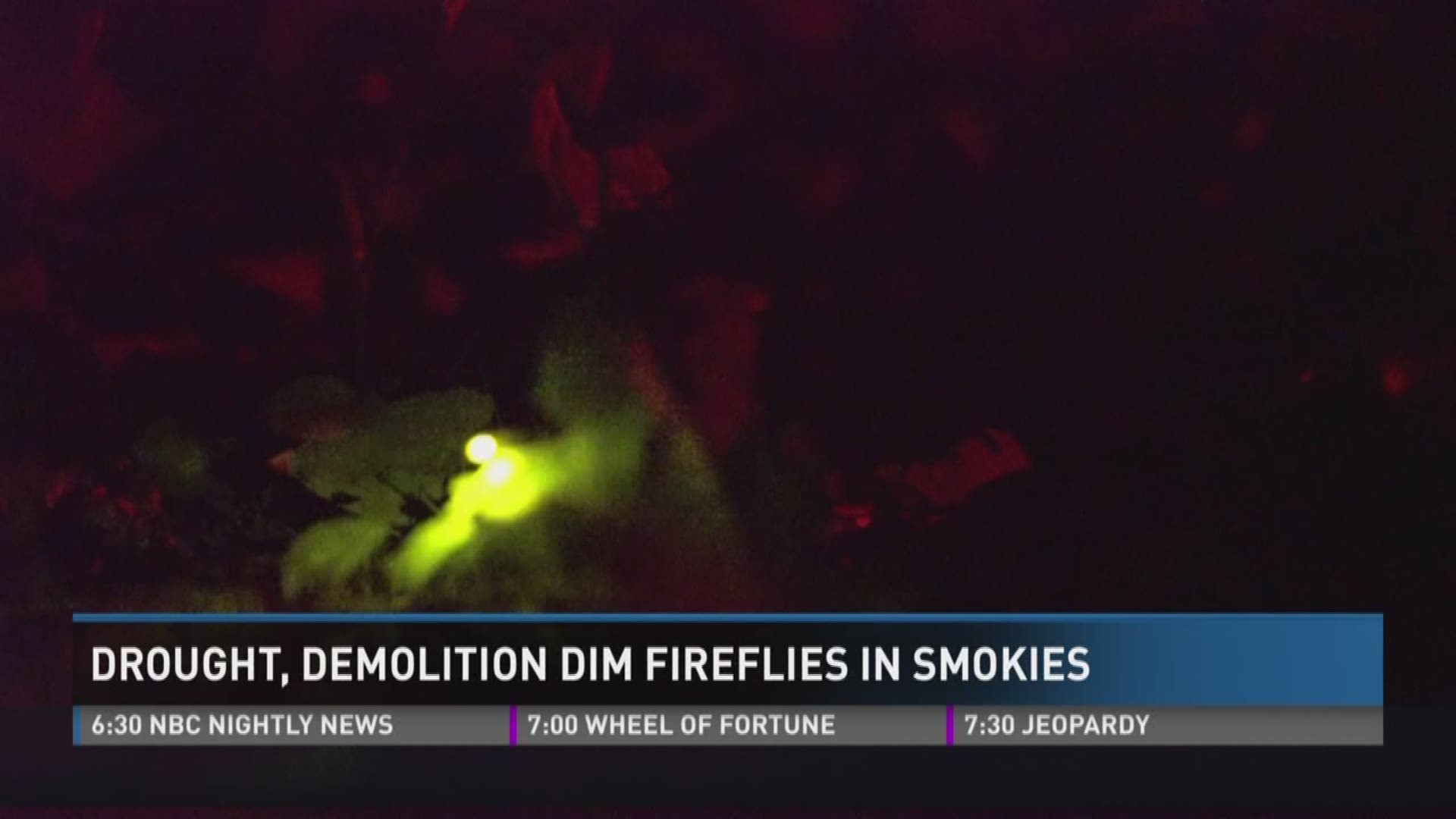 The annual "light show" of synchronous fireflies at Elkmont in the Great Smoky Mountains National Park is a stunning sight to behold any year. However, there was less light for visitors to behold in 2017.

Experts on the lightning bug species that flashes and pauses in unison, the Photinus carolinus, estimate the peak display at Elkmont only reached 30 to 50 percent of its potential this year. There were simply fewer of the glowing beetles in the Elkmont area of the national park in 2017.

"A few weeks ago, we all kept saying, 'It is at 30 or 40 percent. It is getting ready to get better.' We were all hopeful we were just around the corner from a great peak display, but we never really got beyond that level. You had a few pockets of beauty with a really nice display, but not the long stretches normally along the trails," said expert Lynn Faust. "In some of the better areas of Elkmont, it maybe got up to 50 percent of normal."

20 second exposure photograph of synchronous fireflies and blue ghost fireflies along Jakes Creek Trail in Elkmont in the Great Smoky Mountains in June 2017.

Faust is author of the new book "Fireflies, Glow-worms, and Lightning Bugs," the first United States firefly field guide that details the behavior and flashes of more than 75 species in North America. Faust is credited with making the world aware of the synchronous species in Elkmont and also developed the formula to predict the insects' peak mating period, which the national park uses to help schedule its week-long firefly viewing event.

"The extreme drought affected almost all species of fireflies in East Tennessee. I'm seeing lower numbers where everything was struggling with the lack of rain. It hurt the fireflies last year when they were babies. The larvae live and hunt in the soil. In 2016, the soil was hard-packed and dry, limiting their prey and making burrowing difficult. It was hard on these moisture-loving critters." said Faust. "But extreme drought is something these insects deal with every 20 to 30 years. It puts a dent in their populations, but I expect them to recover in the future and we have had good rain this year so far."

The lightning bugs spend most of their existence underground, then emerge in the final stage of life to fly, flash, find a mate, lay eggs, and die. Then the cycle repeats itself with this year's eggs developing into next year's fireflies.

30 second exposure photograph of synchronous fireflies at an alternative site in the Great Smoky Mountains in June 2017.

This year, Faust has traveled to many locations across the southern Appalachians where the synchronous fireflies exist elsewhere in Tennessee, Ohio, West Virginia, North Carolina, and other areas of the GSMNP. She says those sites fared better in 2017 than the flagship location at Elkmont.

Faust thinks the demolition work that began in April to remove more than 30 cabins in the Elkmont Historic District has delivered a double-whammy to this year's firefly population.

"The time of year they chose for demolition of the cabins could not have been worse. In April and May, the lightning bugs are at their most vulnerable. They are on the surface or near the surface of the soil, they are motionless, they are pupating, and they cannot move until they are adults. You bring in all of the demolition machinery, the earth-moving, the heavy foot traffic, the bulldozers, and it kills a lot of them. It hit the carolinus at the very worst time," said Faust.

Faust expressed her concerns about the timing of the demolition to park leaders before demolition began. The project moved ahead as-planned with crews quickly demolishing the cabins along Little River Trail in April. The work then shifted to Jakes Creek Trail in May. The contractor stopped demolition work during the synchronous firefly event with around half of the cabins along the trail razed.

WBIR's video journalists and several spectators at the Elkmont site noted a clear side-by-side difference in the density of synchronous fireflies on Jakes Creek Trail where demolition was completed.

Faust said the fireflies that mated near the cabins awaiting demolition will likely have their eggs immediately destroyed when work resumes.

"It is just a bad time of year from April through the summer to be tearing up the ground and vegetation if you're concerned about lightning bugs. That's a sensitive time when they're coming out of the ground, mating, laying eggs, the larva hatch, then work their way into the ground until next spring," said Faust. "I tell people to stay on the trails in Elkmont if they're going there to watch fireflies. When you get off the trails, walk through the woods, and put down blankets, you're stepping all over areas where fireflies and their eggs are on the ground and vulnerable. If they're vulnerable to footsteps and blankets, you can imagine the damage done by heavy demolition equipment."

Faust has been watching the light show at Elkmont for most of her life. However, her career path as a serious researcher only began in the 1990s when she read an article in Science magazine that naively claimed synchronous fireflies only existed in Asia. Faust knew her family made a tradition of watching a sensational synchronized "light show" for decades at their cabin along Little River Trail in Elkmont.

Lynn Faust watches the synchronous fireflies beside her family&#39;s former cabin at Elkmont in 2010.

"My late mother-in-law was the one who named it 'the light show' and was smart enough to figure out exactly what time of year and the exact time of night the lightning bugs would come out to flash at Elkmont. We didn't realize it was anything rare back then. We just knew it was beautiful. Then I got interested in learning about all the other species and have devoted the last 26 years of my life to studying them. I just love it," said Faust. "I never get tired of seeing 'the light show,' even when it is at 30 or 40 percent. It thrills me each year that it happens again."

While the drought probably killed many lightning bug larvae, there is a chance some may have avoided death by delaying their development.

Some of the lightning bugs in Elkmont and other areas of East Tennessee could still be growing in the ground and possibly emerge next summer, according to Faust.

Syncrhonous fireflies in the Great Smoky Mountains in June 2017. The red tint of the folliage is from a dim red headlamp, which appears much brighter due to the camera's ability to amplify very low light.

"There is a chance some of the lightning bug larvae are alive underground and are just going to take longer to develop. In Boston and other parts of the country where the growing season is half as long as Tennessee, the soil is colder and there's less time to hunt prey and grow. Those lightning bugs up north may take two years or even three years to develop. In our part of the country, they go through the life cycle in one year. I would be very happy if some are still alive and come out next year," said Faust.

Faust says even during spectacular displays, some visitors in recent years have reacted with disappointment when they see the synchronous fireflies in-person. She says many popular photographs of the lightning bugs may lead to unrealistic expectations.

Because lightning bugs emit such low levels of light on the very edge of the visual spectrum, most photographers have to use long exposures to capture the insects' glow. A single photograph is often showing the total number of flashes in the span of 20 to 30 seconds, not a split-second snapshot.

Composite photograph of synchronous fireflies in 2016 at a small footbridge at Elkmont in the Great Smoky Mountains. The photo merges several long exposure photos into a single image.

Furthermore, many photographers will shoot several long exposure photographs from the same angle and merge the images into a single composite image. The edited photograph may be showing the overwhelming movements and flashes that take place over several minutes.

"Some people see these beautiful composite photos where every inch of the sky and the forest is glowing at exactly the same time, and that's what they expect when they come out here to see the light show. That's just not the case." said Faust.

Each firefly species has its own flash pattern and behavior. With the Photinus carolinus, the term "synchronous" should not be confused to mean every insect pulses at exactly the same time with the precision of a computerized laser light show. It is more like waves of a few seconds of intense flashing followed by several seconds of darkness.

A long-exposure photograph shows six flashes from a single synchronous firefly as it moves through the air in the Great Smoky Mountains in June 2017.

The flashing generally lasts around three seconds as the males emit a series of six quick flashes. It starts with a few insects and suddenly the rest of the forest seems to join in. After the first few flashes, many of the insects are in rhythm and flash together identically. The synchronous fireflies then stop flashing in unison for six to nine seconds before the next wave of light. In the darkness, the males overhead search for a discrete response from females on the ground.

In long exposure images of synchronous fireflies, it is common for 12 to 18 flashes captured in a single photograph to actually be just one insect as it flies through the sky.

Faust said this has been an intense year after the massive wildfires that killed 14 people in Sevier County and burned tens of thousands of acres in the Great Smoky Mountains National Park.

In addition to the concerns for people and businesses impacted by the devastating wildfires, she has also watched with a great deal of interest to see how various lightning bug species were impacted by the flames. So far, she says the insects seem to have survived, especially where the fires quickly flared without burning deep into the ground.

"There are quite a few fireflies in the burned areas, so that makes me happy. It is possible some of the lightning bugs we see in burned areas could have flown in from somewhere nearby that was not hit by the fire. But it is still encouraging to see they are abundant in those burned areas. It makes my heart sing."

You Can Help Lightning Bugs

With the extreme drought of 2016 denting populations throughout East Tennessee, Faust said there are many things the average person can do at home to help the lightning bugs bounce back next year.

Syncrhonous fireflies in the Great Smoky Mountains in June 2017. The red tint of the foliage and brush is due to light from a dim red headlamp.

"Turn off your outdoor lights during this time of year when you're not using them. Outdoor flood lights, accent lights, and other light sources make it difficult for lightning bugs to see each other to find a mate," said Faust.

Landscaping choices also have a big impact on the beaconing beetles in your own back yard.

"Minimize your use of pesticides on your lawn. You're killing lightning bugs in the ground and the food they eat. Another thing you can do is cut back how many times you mow the lawn. I know some folks cannot do that, but if you reduce your mowing in half, it might mean more lightning bugs next year."