Dairy farmers are struggling with low prices, and a surplus of milk. 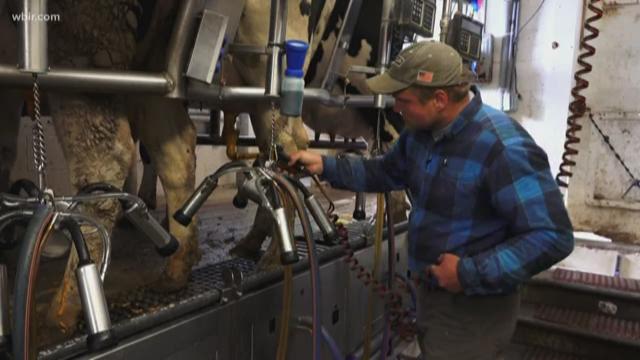 A group of East Tennessee dairy farmers is worried for the future of their businesses.

Dean Foods recently told 100 farmers nationwide it would stop buying their milk on May 31.

“Many factors, including a surplus of raw milk at a time when the public already is consuming less fluid milk and companies assertively entering or expanding their presence in the milk processing business, have exacerbated an already tenuous situation in a highly competitive market,” a Dean spokesperson said.

“Our decision was an incredibly difficult one and a step that we worked very hard to avoid,” she added.

Dean will continue to purchase milk from 12,000 U.S. producers, including some in Tennessee.

But the loss of these contracts can be devastating for producers. Eddie Gilbert was among those farmers, and said it will be tough to find another buyer.

“If we don’t get somebody, we’ll have to sell-out,” he said.

Dean cited several factors in its decision, including a surplus of milk on the market. That issue is affecting East Tennessee farmers that still have buyers for their milk.

“The fluid milk market has always been competitive, but we’re in unprecedented times,” the Dean spokesperson said.

Brant Stooksbury works on his family’s farm in Jefferson County. Though they have not lost their buyer, he said for the past two years, their milk hasn’t brought in the price it used to.

“We’re getting paid well under the production cost,” he said.

“It’s a tough situation, and I don’t know the answer for it,” Stooksbury said. “I don’t know what all has happened to lead to this point, but I know it’s devastating several family farmers.”

Stooksbury sells his milk to Piedmont Milk Sales, of Blountville.

“They did come and tell us that they couldn’t pay what the federal order price is for our milk, or they would go under,” he said.

He said Piedmont asked them to form a co-op, which could allow them to sell the milk cheaper. But lowering their price doesn’t solve Stooksbury’s problem. Piedmont denied this to 10News.

Piedmont said it’s not facing bankruptcy, but has a "marketing and regulatory challenge" to solve with the USDA.

“Businesses have to make adjustments to changing markets and landscapes,” Piedmont President Mike Jackson said. “We are in communication with our farmers to ensure we have the best path forward.”

Stooksbury’s family joined several other farmers in a letter to U.S. Rep. Phil Roe, R-Tennessee, with a list of issues – including that milk’s federally set price is well below the cost of production, and that farmers can’t control the price.

“It is certainly past time for the neglected dairy farms to have a change,” they wrote.

“Through meetings I have taken with agricultural stakeholders across my district, time and time again I have heard about the difficult economic conditions facing our farmers,” Roe said in a statement. “As the House considers a reauthorization for a new Farm Bill, I am committed to working with my colleagues to ensure this legislation contains adequate agricultural safeguards that encourage a new generation of farmers.”

He also pointed to $800 million allocated in the Bipartisan Budget Act of 2018, to “strengthen and improve the dairy safety net.”

But in the meantime, several impacted farmers told 10News that without a buyer and distributor for their milk, they might be forced to sell their cows to slaughter.

“It’s heart-wrenching for dairy farmers because you get an attachment to these animals,” Stooksbury said.

He also hopes to implement a partial solution by building his own processing facility to sell some of the product directly to consumers.