A battle may be brewing for Tennessee's largest statewide online school. Whether the Tennessee Virtual Academy has just one more year to improve scores or else face state intervention - depends on who you ask. 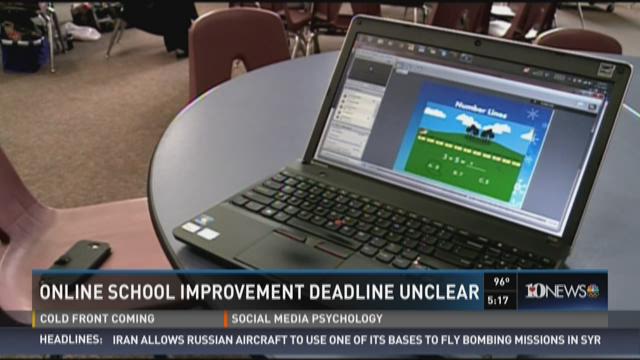 A battle may be brewing for Tennessee's largest statewide online school.

Whether the Tennessee Virtual Academy has just one more year to improve scores or else face state intervention - depends on who you ask.

It opened in 2011, following the passage of the Virtual Schools Act. Since then, the Virtual Academy has been one of the state's lowest-performing schools.

The school has faced the possibility of closure on more than one occasion, but with efforts including a lawsuit filed - and won - by TNVA parents, the school has remained open and, leaders say, committed to serving its students.

Now, TNVA could face state intervention once again, depending on this school year's test scores.

Tennessee Virtual Academy serves students all over the state, who don't necessarily thrive in a brick-and-mortal school, with reasons ranging from chronic illness and bullying to home schooling and traveling athletics.

It's based out of the Union County Public Schools district, but its largest group of students is from the Memphis area, followed by Knoxville, then Nashville, then the Tri-Cities and - finally - everywhere in between.

"It just gives an option to parents that otherwise may not have an option," said Union County Schools Director Jimmy Carter. "I'm happy that we are able to offer this and - for my part - I want it to be a quality program that parents and students feel good about and are proud of, and I think that's where we are."

The Tennessee Value-Added Assessment System composite score measures how a school improves from one year to another.

On a five-point scale, TNVA scored lowest, a "1," in the past 3 years of improvement data. Because of the TNReady testing failure this past school year, data for 2015-16 school year is not available.

State law says the education commissioner may step in and take action after three years of such low scores.

Education Commissioner Candice McQueen told WBIR 10News in June that the statewide online school has one more year to prove itself.

"The Virtual Academy needs to perform. They need to have scores that are showing that they are certainly growing their students at the rate that the law requires," McQueen said, "so our expectation would be that this year, because they did not have (grades) 3-8 data (for the 2015-16 school year), that next year would be considered the third year of their progression as a virtual academy, under the law that we currently have in the state."

But Carter said shifting state academic standards plus last year's testing fiasco should mean a clean slate - and back to year one of data.

"We didn't test last year, so my assumption is that we would start year one this year and move forward," Carter said. "I feel like that's really kind of where we are, is we're at year one."

To be clear, there is nothing currently standing in the way of TNVA completing this academic year. The two different understandings of the improvement deadline, however, may need some clarification in the school's near future.

Each public school student in Tennessee has a certain dollar amount the state spends on his or her education, which goes to the district in which they attend school. Those are Basic Education Program funds. Carter said 96 percent of the BEP funds of each out-of-district student who transfers into Union County Schools to attend TNVA goes to K12, which - in turn - provides laptops, other materials, teachers and curriculum for the students. Union County Schools gets 4 percent of each student's BEP funds.

Some have alleged Union County is looking to benefit from operating TNVA or criticized the district for using a for-profit company. Carter said he sees K12 as a vendor - just like any other for-profit vendor that any other school district may use for its services and products. He pointed to textbook companies as an example. Plus, he said, Union County Schools provides the same oversight, supervision and support to its TNVA students as it does to students at any of its brick-and-mortar schools.