A former Hamblen County inmate says he was brutally beaten over a $38 debt by another inmate who was paid two boxes of pop tarts to attack him while he slept. 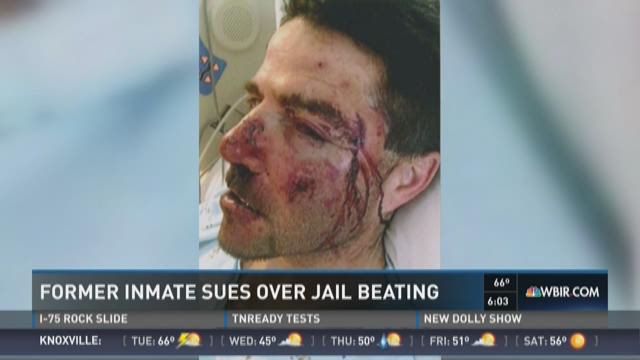 A former Hamblen County inmate says he was brutally beaten over a $38 debt by another inmate who was paid two boxes of pop tarts to attack him while he slept.

On Friday, he filed a $5 million civil rights lawsuit in U.S. District Court.

Through a spokesperson, Jarnagin said county attorneys have advised him not to comment due to the pending litigation but “at a future date” he would issue a statement.

The former inmate, Jeremy Garcia, says he was “viciously attacked” Feb. 26, 2015 by Kaleb Enix, who was later charged for the assault.

The lawsuit says jail officials had a number of opportunities to avert the beating and were repeatedly warned that Garcia’s safety was in jeopardy.

In addition, it says the jail is overcrowded and understaffed, and that authorities don’t separate inmates by their varying degrees of crimes, like many jails in the state do.

The lawsuit also accuses authorities of concealing details of the incident because the county so far has refused to turn over reports and videos that detail the incident.

"While he was in Hamblen county's custody he was brutally beaten by another inmate. That fact is undisputed," said Garcia's attorney, Lance Baker. "We believe that the county, the sheriff, the jail administrator, and the corrections officers not only violated Mr. Garcia's civil rights, but we further believe that the beating, and Mr. Garcia's injuries, could have been prevented if only Hamblen County would have taken basic and reasonable measures to protect him from harm they had every reason to know was coming.

Baker added: "When a county takes inmates into custody, they have a duty to protect them. Here, unfortunately that duty was ignored."

Jeremy Garcia says he was &ldquo;viciously attacked&rdquo; Feb. 26, 2015 by&nbsp;Kaleb&nbsp;Enix, who was later charged for the assault.

According to the complaint, here’s what happened:

Garcia, who is described as an “intellectually-disabled 40-year-old” from Knox County, was arrested in early September 2014 on a misdemeanor theft charge and placed in the Hamblen County Jail.

While there, he was “threatened, harassed and intimidated,” by “The House,” a small group of inmates who secure food and tobacco for the other inmates.

Garcia at the time was kept in the jail’s annex, a 24-bed unit.

Fearing for his life, Garcia repeatedly asked jailers to move him. His mother also contacted administrators who finally placed him in another area of the jail. Garcia pleaded guilty to the theft charge and was released at the end of September 2014.

Authorities, however, arrested him in February 2015 for violating his probation. He was again put in the annex.

The lawsuit says the area was overcrowded – almost 90 inmates packed the area – and Garcia was forced to sleep on the concrete floor. Shortly into his second stint in the jail, “House” members again threatened him, saying he owed them $38 from his previous stay.

One guard, according to the lawsuit, even told him: ““Ah, Garcia, you got this, my money is on you.”

On the afternoon that he was attacked, he handed a note to a corrections officer that said: “I’ve got problems in this Annex. I need to get out ASAP. I am in fear of my life!”

The lawsuit says the officer told him: “We’ll do something.”

But, around 10 p.m. that night a member of the “House” asked Kaleb Enix, who was jailed earlier that day on a domestic assault charge, to “beat up” Garcia while he slept.

The lawsuit notes that Enix “repeatedly punched him” in the head and face more than a dozen times.

Witnesses, according to the lawsuit, said it “sounded like a hammer thumping (Garcia’s) face each time Enix made contact,” and that Garcia’s “face just kept bouncing off the jail’s concrete floor.”

The beating stopped after another inmate intervened and notified a guard.

“Either the corrections officers were not paying attention or they were simply indifferent to the attack,” the lawsuit states. “Every other inmate simply stood idly by and watched the beating.”

A witness said “House” member Jessie Killion told Enix he would give him two boxes of pop tarts and other commissary items if he would “beat” Garcia.

Garcia suffered multiple facial fractures, including severe damage to his eyes and nose, according to the lawsuit. He underwent emergency surgery at the University of Tennessee Medical Center that evening.

The lawsuit says he suffers memory loss and moderate depression because of the beating.