The buyout for former UT Head Football Coach Butch Jones is more than $8 million. Where does the athletics department get that money? 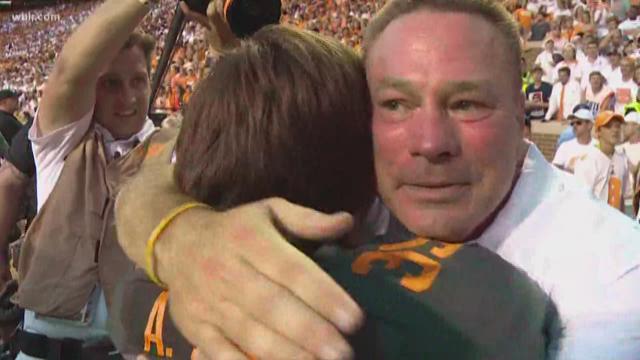 Paying coaches to leave is not a new concept, but it may come as a surprise that the athletics department can pretty easily absorb the cost.

Jones getting fired seemed like just a matter of time for some fans, but in the matter of money, there's millions of dollars to talk about.

"Well the buyout is a lot of money," attorney and Inside Tennessee panelist Don Bosch said. "The university certainly has spent a lot of money in buyouts."

The university's termination letter to Butch says they'll pay his full buyout according to his contract - $8.2 million.

But Bosch says that number may change.

"$8 million is a lot, maybe up to $13 million before all the offsets if all the assistant coaches are let go," he said.

Whatever the price tag may be, Tennessee's athletics department will pay up.

"Frankly with the budget, they'll be able to do that and absorb that," Bosch said. "The hope is that you get coaches in here that stay long term and are stable."

That's because the department doesn't have a problem making money.

Ticket sales for all sports made up about 26 percent of the nearly $138 million the department made in 2015, the NCAA and SEC TV deals made up 30 percent and the Tennessee fund - private donations - made up 22 percent.

Everything else, including concession sales and trademark licensing, make up the remaining 22 percent.

Total revenue is $15 million more than Georgia and about the same as LSU and Auburn.

The department used that revenue to pay Jones his $4.1 million yearly salary.

"I was never paid very much here at the University of Tennessee, because frankly I worked for some cheap people," Majors said.

He said he had a lot of support when he was at UT, and SEC coaches are paid well now.

"I think anybody, including Butch Jones, who's working daily, deserves to make good money," Majors said.

And the money went up.

Jones tops them all.

Bosch said that's how the market is now.

"It's a market-driven industry, and universities make a tremendous amount of money from college sports, and particularly college football and basketball," Bosch said. "So that money is going to get shared, and coaches are a large part of what drives that market."

Bosch said Tennessee, in relation to other coaching contracts, actually had a pretty good deal with Butch's buyout.

He said they actually saved a lot of money with contact language that favored the university.