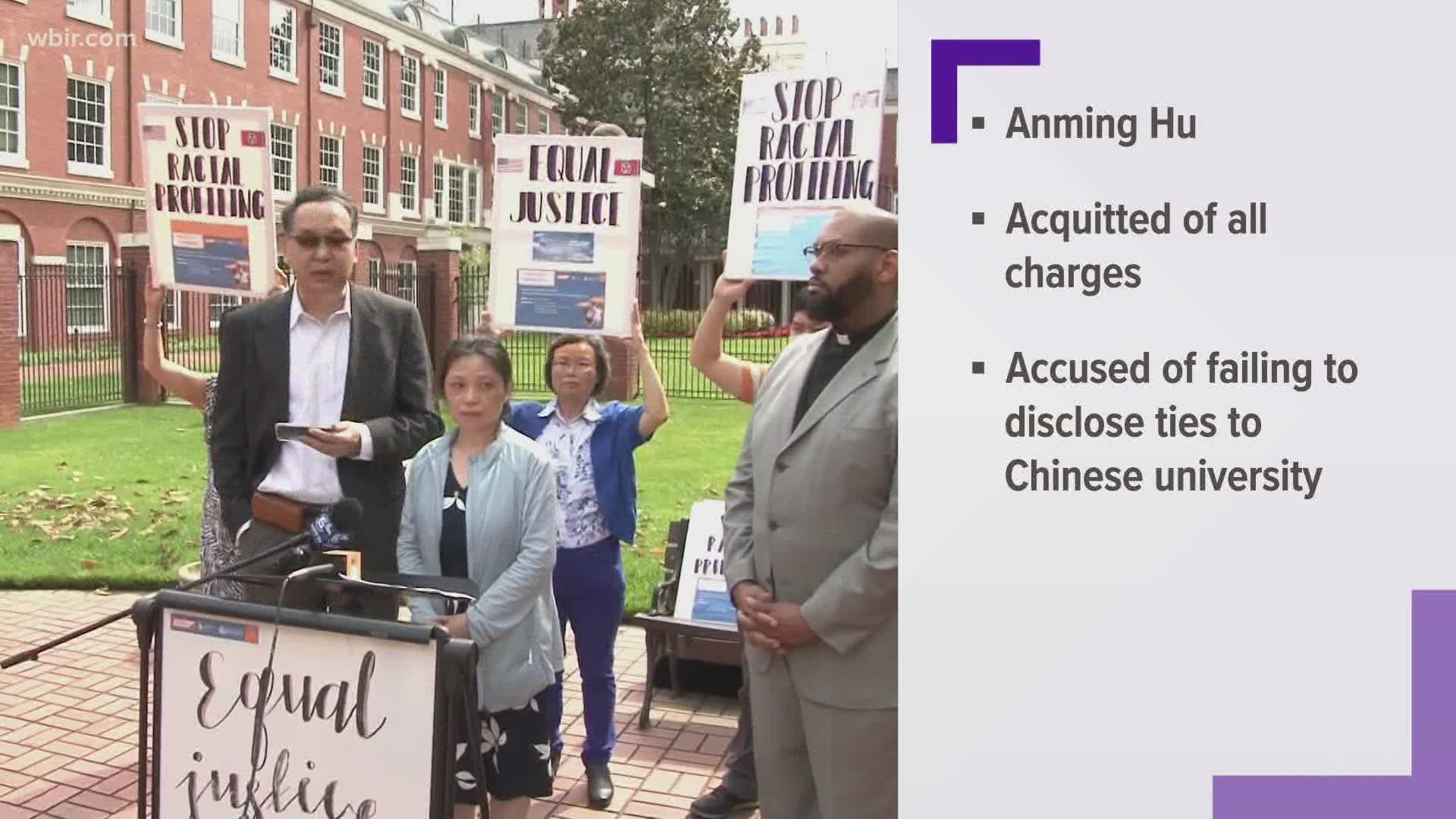 KNOXVILLE, Tenn. — A federal judge Thursday afternoon cleared a former University of Tennessee professor and researcher of all government charges, saying no rational jury would find him guilty of trying to run a scheme to hide his ties to a Chinese university while doing contract work for NASA.

In granting Anming Hu's motion to acquit, U.S. District Court Judge Thomas A. Varlan tossed three counts of wire fraud and three counts of causing false statements to be made as originally sought by the Trump administration in a 2020 indictment.

In June, an East Tennessee jury in Knoxville told Varlan they couldn't make up their minds whether Hu was guilty -- a clear sign the government's case was in peril.

Hu's attorney Phil Lomonaco also asked Varlan in the waning days of trial to toss the case, arguing there was insufficient evidence against his client.

Varlan said his review of the facts showed the government hadn't met its burden of proof.

It failed to offer enough evidence that Hu tried to deceive anyone about his ties to Beijing University of Technology while doing research for NASA while at UT, the judge wrote Thursday.

There's not even enough evidence "that (Hu) personally understood that NASA's China Funding Restriction applied to his affiliation with (the Chinese institution)," Varlan observed.

Given a deadline by Varlan, the government in July announced it planned to re-try Hu. That left it up to the judge to decide whether Hu should be acquitted.

Hu is a former associate professor in UT's Department of Mechanical, Aerospace and Biomedical Engineering. The Chinese Canadian's also a respected researcher whose areas of interest include nanomanufacturing.

The alleged FBI misconduct and mistrial in the case of Professor Hu yesterday has echoes of Wen Ho Lee, Sherry Chen & Professor Xi, all of whom were falsely accused by @TheJusticeDept of spying for China. @RepMondaire, @RepJayapal & I are asking the IG to investigate. pic.twitter.com/Sz9R76ctm8

The government alleged he violated federal law by hiding a relationship with the Chinese university while securing contracts with NASA.

Federal law prohibits NASA from using appropriated funds on projects in collaboration with China or Chinese universities, the government said.

At trial, Varlan noted, paperwork from UT suggested the "China Funding Restriction" wasn't even applicable to UTK faculty. Further, Hu submitted a letter of support for one contract through the Jet Propulsion Laboratory in California that he was a longtime collaborator with a professor at a Chinese institute.

"If (Hu) was attempting to conceal his affiliation with Chinese institutions for the purpose of obtaining NASA grants, it is unlikely the defendant would have highlighted his collaboration with Professor Zhang in the documentation he intended to be submitted to NASA," the judge wrote.

Several organizations, researchers and academics have submitted letters this summer to Varlan in support of Hu.

The Asian American Scholar Forum in New York just sent one Sept. 3, saying the government built a flimsy and false case against Hu.

The FBI put the professor and his family under surveillance for 21 months, the letter states. "The false accusation also caused the termination of his tenured employment at the University of Tennessee," the letter states.

"It is unfair for scientists to be prosecuted for failures to disclose encouraged activities when the federal agencies' disclosure rules were not clear," the forum wrote. "Many of these prosecutions appear to be based on the principle of presumed guilty until proven innocent.

"Asian American scientists have been targeted and affected disproportionately."