A stone chimney and a pile of burned debris is all that remains of the Wonderland Hotel Annex in the historic Elkmont District of the Great Smoky Mountains National Park. 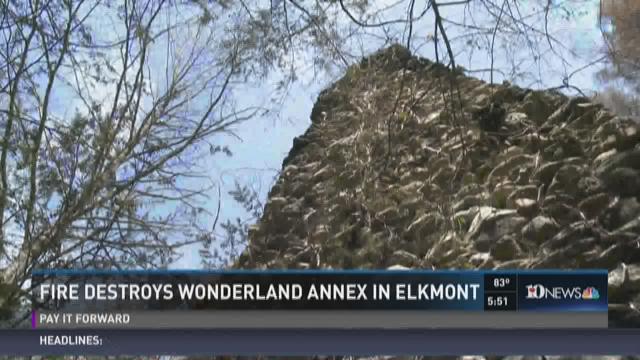 A stone chimney and a pile of burned debris is all that remains of the Wonderland Hotel Annex in the historic Elkmont District of the Great Smoky Mountains National Park.

Park officials said a visitor reported the fire at the Wonderland Hotel annex at 7:15 Tuesday morning. Firefighters from the park service and Gatlinburg prevented the fire from spreading, but the building was already destroyed.

"By the time our crews arrived, it was just smoldering ashes and a few hot spots," said GSMNP spokesperson Dana Soehn. "Of course, the building that burned was the annex building. But the whole site is very special to me."

The final chapter for the Wonderland Hotel was written a quarter century ago. That's when the NPS decided to close the hotel and demolish it along with many other structures. The hotel building was razed in 2006, but the annex and other buildings have remained standing.

The annex was on the list for demolition when funds became available, but a large fire is not how the NPS wanted the building's story to end.

"It is still a loss to us to lose it in this way," said Soehn. "It evidently had been a very hot fire. The structure was more than 8,000 square feet. You can see the tops of the trees were singed. This fire will be under investigation once the site cools enough for investigators to search for the cause."

Electricity to the building was cut off years ago and there was no lightning Monday night or Tuesday morning to send the structure up in smoke.

Inside the Wonderland Hotel Annex in 2014.

Soehn said the park is asking anyone with information about how the fire started to contact their tip line at 865-436-1580.

While the annex structure is gone, its story will live on. The park preserved anything of historical value years ago.

"The artifacts have already been removed from the building and are in the museum," said Soehn.

Exterior of the Wonderland Hotel Annex in 2014.

The annex was located next door to the Wonderland Hotel and contained 24 guest rooms, a common area, and a screened porch.

Both buildings were part of a larger resort that thrived in the Smoky Mountains before the park was established.

The Elkmont Historic District was placed on the National Register of Historic Places in 1994. At that time, there were 74 cottages along with outbuildings and the hotel. After years of debate, it was decided that 19 of the historic buildings would be saved while the others would be removed as funding became available.

The charred chimney is all that remains of the Wonderland Hotel Annex.

The area is near the busy Elkmont campground, and is a popular place to visit. It's also the area where visitors flock to see the synchronous fireflies every summer.

The campground and trails remain open, but the area around the Wonderland Hotel is closed as park crews check for hot spots.