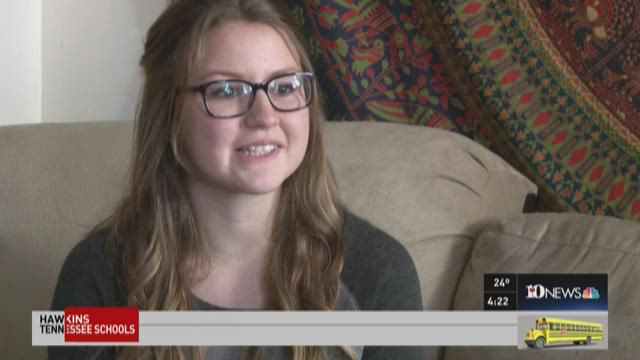 (KNOXVILLE) The closed captioning feature on TV screens and movies is designed for those who cannot hear. Another feature is catching on to help those who can't see enjoy those programs.

A student filmmaker at the University of Tennessee has incorporated the feature into her own documentary.

Caroline Knight worked on a short documentary for about two months as a class project, editing it in her room at a house near campus. She calls is "Visionary."

"It's kind of always was an idea for the past two years, ever since I met Sue," she said.

"Sue is just so enthusiastic and passionate. I mean, she was just so wonderful and so easy to talk to and be in a room with her," she said.

Sue lost her sight almost two decades ago. She is the founder of an advocacy group for the visually impaired called Club Vibes.

At one point in the film she said: "You know, I think I want to do something that's going to help others learn about resources, because when I first lost my sight, learning to navigate and know that there is a cane that's the right size or that they even exist, some of the equipment. I want to share that knowledge of resources and share my love of bicycling. And so I thought, that's what I want to do. I'm going to start a group that's going to tandem-bike and learn about resources."

Caroline's film focuses on Sue and a new member of Club Vibes who is going blind, James Jarnigan.

"It was kind of great to get the parallel of James just now going through this and someone who is kind of a master at living life like this," she said.

She made two versions of the film, a regular one and one with an added feature.

"I also made an audio-described version for those who - quote - aren't able to watch it," she said. "I didn't want anyone to be left out and especially because this film is for those with visual impairment."

A voice describes each scene as it unfolds. A person is standing here. Another person is wearing this. Here's a description of a landscape.

Sue and Caroline both agree that the audio-described option is becoming more available, especially on Netflix.

"Netflix is really great for those who can't see and they want to listen to movies. They actually do a really good job of audio-describing what is going on in a scene. It was great. I actually closed my eyes for a few scenes," Caroline explained.

After graduation, Caroline would like to move to New York. But she will pursue her interest anywhere.

"Mainly just to make documentaries on social justice issues and things like that. I would just hope to make a difference with the pieces I make," she said.