Joe Castillo lived in Knoxville in the 1980's. Castillo's eye for art led him to create Sand Story, and ultimately, land a spot as a contestant on NBC's 'America's Got Talent'. Today, he continues to tell stories through sand and light and says the show changed his life. 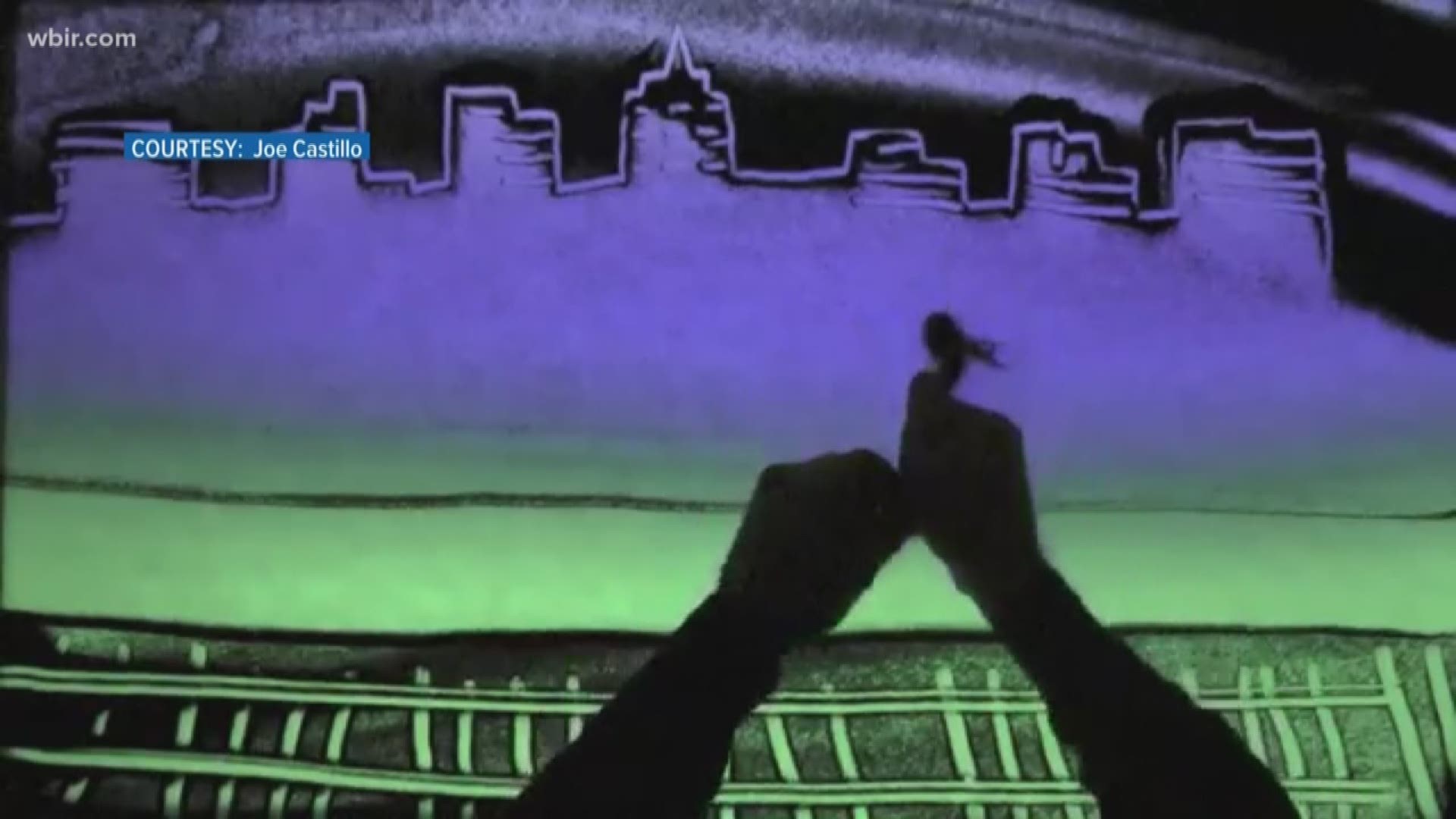 Knoxville, TENN. — In 2012, Joe Castillo made it to the finals of NBC's powerhouse program, America's Got Talent. Castillo, a sand story artist from Kentucky, came into sand light art from an idea from his son.

"A number of years ago, going on 14 now, my son Jose sent me a little video clip of a guy in Budapest who was doing stop-motion photography in sand," Joe said. "And I thought 'man, that would be a great way to be able to tell stories'. I wound up at the hardware store and the department where they had bags of sand, one of the bags had ripped open and spilled out on the floor and people had scuffed through it. As an artist you see images everywhere and I thought maybe I can do something with that."

Inspired, Castillo went home with a sack full of sand and cobbled together a platform in his garage.

"A kitchen light fixture and table legs," said Joe. "I duct taped a handycam over the table, plugged it into my TV set and sure enough, the images started coming together."

Castillo's Sand Story tells stories through music, light and sand. Castillo made it on to America's Got Talent in 2012.

"The truth is they called me. They had seen some of my video clips online and they thought 'maybe we need a sand artist'," Joe said. "So they flew me down to Austin, Texas and I was down there with, I don't know, they had 6,000 people and I got a chance to try out in front of the judges. The judges that summer were: Howie Mandel, Sharon Osbourne and Howard Stern, so that's how I got started."

Castillo made it all the way to the finals on the. He admits coming up with something new and inventive each week was a challenge.

"That was exactly the hardest part because you know, you spend all this energy in creating something new and then as soon as you get passed on, you think 'I've got one more week to come up with a new one'. So that kept happening for six weeks before we made it to the finals," Joe said.

Since his time on America's Got Talent, Castillo has taken his talent all over the world.

"Sand story, which nobody had ever heard of before, wound up becoming for me a world wide sensation. My videos have gone viral on YouTube and I've gotten the chance to perform in 45 states, 27 foreign countries and have gotten the chance to perform for 4 living Presidents and Kings and Queens and CEO's all over the world. So, it's been phenomenal and as far as I can tell, it hasn't really slowed down much."

Castillo lived in Knoxville and ran a successful advertising agency on the south side of the Tennessee River (near the old Baptist hospital). He still has friends and family in the area and visits the area on their way up to the Tri-Cities to see his son, Jose, who works for the Bristol Motor Speedway.

As Knoxville gets ready to welcome talent from all over for the auditions for America's Got Talent, Castillo shares some advice for those looking to get on the program.

"I discovered that America's Got Talent was very helpful for me but it wound up just being one brick in the wall, and there's a whole lot of other bricks and there are venues and events going on all over the U.S., all over the world all the time. So if you want to be in the entertainment business, work hard, polish your craft, be willing to try out and don't be afraid of failure."

Note: WBIR Channel 10 will be live from the America's Got Talent auditions on Nov. 15, 2018 at the Knoxville Convention Center. Click here to learn more about the auditions!