Frances the giraffe making herself at home at Zoo Knoxville

Frances the giraffe is easing her way into the public eye at Zoo Knoxville. 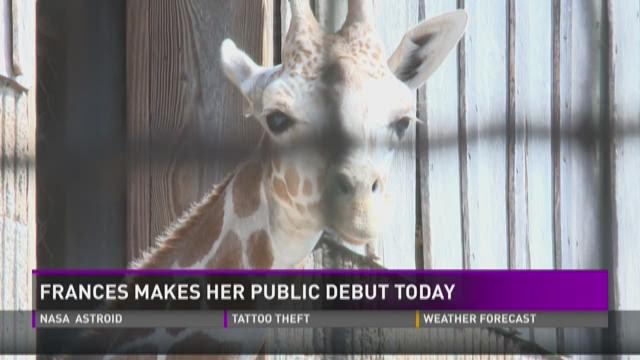 Frances the giraffe is easing her way into the public eye at Zoo Knoxville.

The 1-year-old giraffe arrived in Knoxville from the Como Park Zoo and Conservatory in St. Paul, Minn. over the weekend.

On Monday, zoo keepers introduced her to the zoo's other female giraffes, 30-year-old Patches and her daughter, 15-year-old Lucille, in the barn area of their exhibit. She met the Jumbe, a 13-year-old male, for the first time on Tuesday.

1 / 5
Frances, a 1-year-old giraffe, is the latest addition to Zoo Knoxville.

Tuesday morning, Frances ventured out of the barn into the corral for a short visit before retreating back into the barn. She's expected to get more and more comfortable going outside as the week goes on, and should be given access to the full Grasslands Africa yard on Wednesday.

The public can see her from a distance for now, and she's easy to spot because she's so much smaller than the others.

Once Frances is adjusted, the public will be able to see her full-time with the rest of the giraffes.

Though Frances is young, don't expect her to form a mother/daughter bond with one of the other female giraffes. Zoo spokesperson Tina Rolen says giraffes don't form strong interpersonal bonds in the wild, and it not uncommon for them to drift from herd to herd.

"So it’s more like amicable companionship all around," she says.

It's hoped that Frances and Jumbe will eventually become parents, once she reaches full maturity.