Future of Townsend swinging bridge up in the air

The Dark Island Swinging Bridge in Townsend is closed while Blount County and the city determine who is responsible for maintenance and liability. 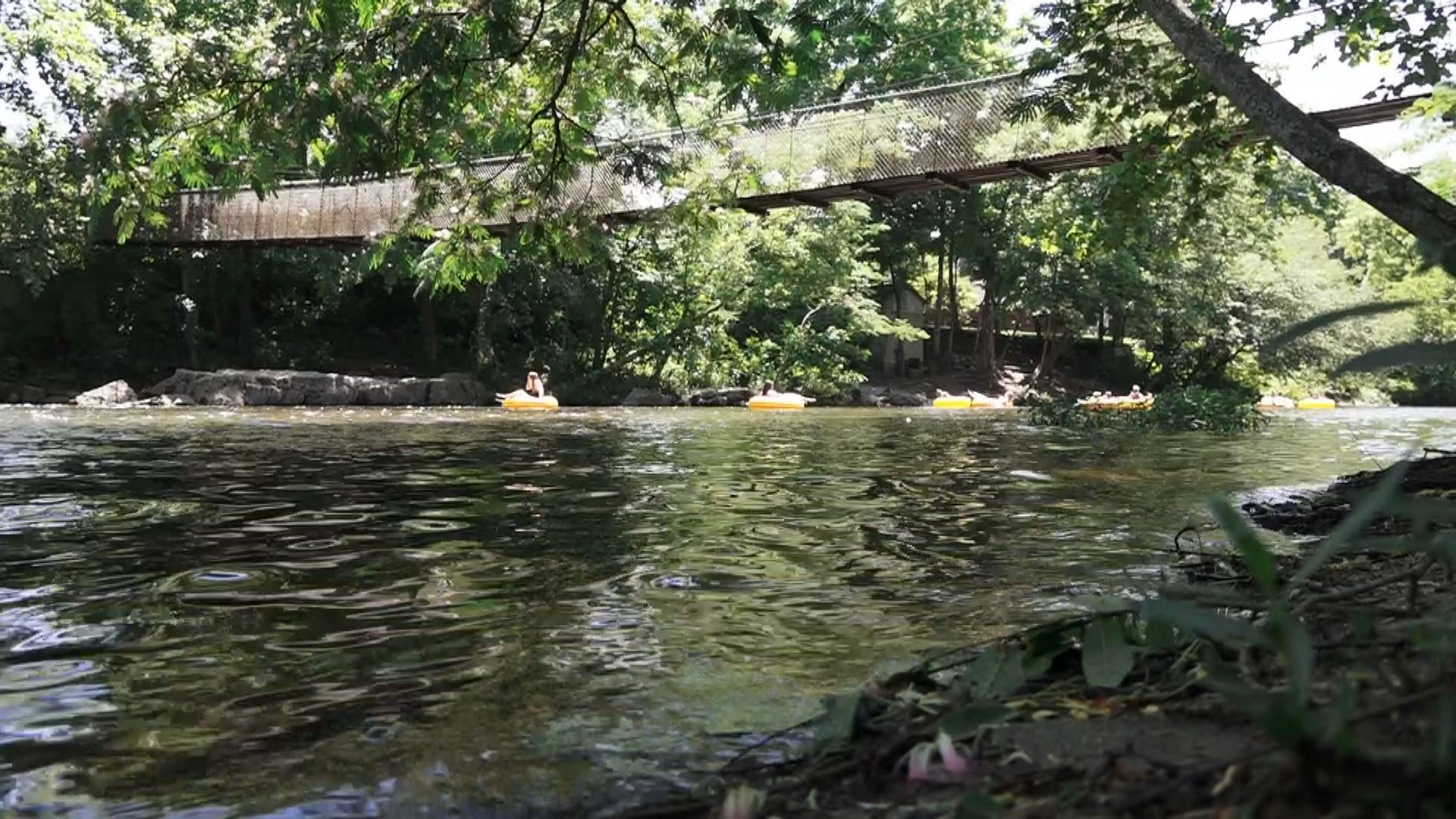 TOWNSEND, Tenn. — Where the Little River flows out of the Great Smoky Mountains in Blount County, the water serves as the city limits for Townsend.  The south bank is in the city while residents on the north bank live in the county.

The neighborhoods across from each other on the river share an iconic connection. Swinging bridges have spanned the Little River for more than a century and linked the city and county neighborhoods.

"We like the bridge here. It's a very important part of the community," said Steve Hall, whose property holds the north footing of the Dark Island Swinging Bridge.  "The bridge is a tourist attraction, an emergency access point, and it lets walkers or cyclists cross the river without having to use a dangerously narrow road with no sidewalks."

Credit: WBIR
Boards and police tape block the entrance to the Dark Island Swinging Bridge over the Little River to Townsend.

Since May 28, the Dark Island Swinging Bridge has represented a divide between the city and county.  The Townsend Police Department boarded up the entrances, announced on Facebook the bridge was unsafe, and said the bridge would remain closed until the Blount County government decides its "next course of action."

"We just came outside and there was police tape," said Hall. "There are a couple of boards on it that need to be replaced, but it is a minor repair that should not cost much. But right now the city and county are at an impasse and I was told they're thinking of disassembling the bridge. I could not believe what I was hearing. It's an important structure here."

The two remaining swinging bridges in Townsend at Dark Island and Kinzel Springs were built to replace bridges that were washed away in the flood of 1994.  The Blount County Highway Department secured a grant to build three swinging bridges in 1997 because the structures were tourist attractions that provide a connection to the past.

Credit: WBIR
Visitors in Townsend are blocked from entering the Dark Island Swinging Bridge that crosses the Little River on Jun. 11, 2019.

"Anyone has access to the bridge. It's on TripAdvisor's most important places to visit when you visit Townsend.  I mean, people don't come from California to visit this bridge. But it is something a lot of people enjoy when they come to Townsend. It does enhance the quality of what Townsend is all about as a beautiful community," said Hall. "I would like to see them make some quick repairs to a couple of boards and leave it open while they decide the future of the bridge."

Headrick said he does not intend to make any "rash decisions" about the future of the bridge at this point, but he wants to establish with complete certainty who owns the structures before investing in additional maintenance.  Headrick said he is working with the county attorney and register of deeds to research who is liable for the bridge.

Hall said whoever owns the bridge, he cannot imagine a scenario where it would be cheaper to tear the bridge down than to maintain it.

"These bridges require minimal maintenance. You are talking about a few hundred dollars since I bought this property six years ago.  If you removed them, you would have a significant expense to remove concrete pilings, cables, metal, and wood that spans the river. It is going to be a significant expense that could probably pay for 15 years of maintenance," said Hall. "I think they can figure something out regarding liability, be it more warning signs or whatever is needed."

Hall is speaking with the Blount County Commission about the situation and praised Headrick for his willingness to listen to his perspective.

"I was afraid the decision had already been made to take the bridge down. Jeff Headrick was very receptive and willing to listen and assured me no decision would be rushed without weighing all the options," said Hall.

Hall remains hopeful both city and county can build a bridge of communication to find a solution to save an iconic landmark.

"I think in the bottom of my heart, Townsend and Blount County can do this. We are not in Washington, D.C., where people are on the opposite end of the spectrum. We are all in the same community and want the same things.  We are a community and there's no reason that this can't be solved," said Hall.

The Blount County Commission holds a work session Tuesday night. Hall planned to attend and raise his concerns about the bridge.