Ross, who dated Floyd for three years, told the jury about his character, his grief after his mother’s death, his love for exercise and his struggles with addiction. 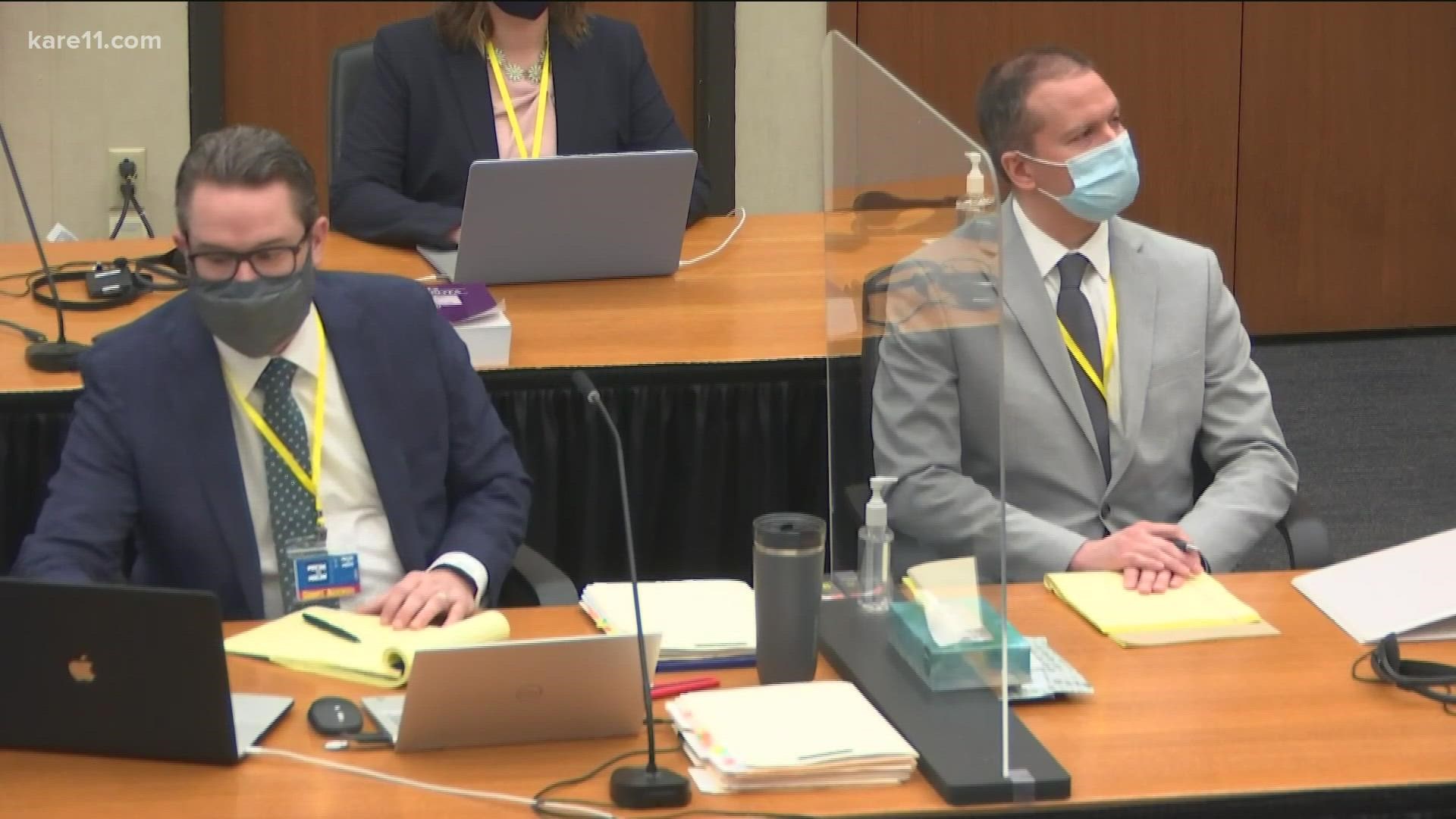 MINNEAPOLIS — The fourth day of testimony in the murder trial of former Minneapolis officer Derek Chauvin began with George Floyd’s girlfriend, Courteney Ross, who gave insight into their relationship and their shared struggles with opioid addiction.

Ross, who wore a necklace with Floyd’s name and a heart pin, told the jury about Floyd’s character, his grief after his mother’s death, his love for exercise and his on-and-off drug use.

Prosecutor Matthew Frank started off questioning Thursday by asking Ross about the first time she met Floyd back in 2017, when he was working as a security guard at a Salvation Army.

Ross recalled being upset in the lobby, and Floyd approaching her and checking if she was OK. She said Floyd asked her, “Well, can I pray with you?”

“I was so tired, and we had been through so much, my sons and I, and for this kind person to just come up to me and say, ‘Can I pray with you?’ when I felt alone in this lobby,” Ross said of Floyd comforting her. “It was so sweet and at the time, I had lost a lot of faith in God.”

She told the jury that they became “very close,” and dated until the time of Floyd’s death, seeing each other nearly every day.

Ross said she used to show Floyd around Minneapolis, since he was new to the city. She said they loved spending time outdoors and walking around the city’s sculpture garden. They also enjoyed eating out, sharing a love of food.

“It was an adventure always with him,” Ross said.

Both the state and defense asked Ross about drug use as a part of their relationship, and she acknowledged that they both suffered from opioid addiction.

“It’s a classic story of how many people get addicted to opioids,” Ross said. “We both suffer from chronic pain. Me in my neck and he in his back.”

Ross said they tried many times to break their addictions.

"Addiction in my opinion is a lifelong struggle, so it's something we dealt with every day," Ross said. "It's not just something that comes and goes, it's something I'll deal with forever."

Ross explained that there were periods when they used together, as well as times of sobriety.

It’s a key element in the trial after Chauvin’s attorney claimed in opening statements that Floyd died because of heart problems complicated by a drug overdose – and not because of the officer’s knee on his neck.

An autopsy introduced as evidence in pre-trial motions revealed that Floyd had a “mixture of methamphetamine and fentanyl” in his system at the time of his death, according to defense attorney Eric Nelson.

Nelson argued at the beginning of the trial that Floyd died of “cardiac arrhythmia that occurred as a result of hypertension, his coronary disease,” ingesting drugs and the “adrenaline flowing through his body.”

Ross testified Thursday that the two people in the car with Floyd when he was arrested, Morries Hall and Shawanda Hill, were individuals who he either bought or used drugs with in the past. She also told the jury that she had noticed changes in his behavior in the weeks before his death, which she interpreted as a sign that he was using again.

And beyond that, Ross testified that they obtained pills in March that looked different than what they typically took and made her feel “jittery.” Floyd was hospitalized that month for a drug overdose, Ross told the defense Thursday.

Mary Moriarty, a former chief public defender in Hennepin County, explained that the defense’s argument hinges on claims that these pills were potentially accessible to Floyd on the day he died.

Moriarty believes that Ross’ testimony is also helpful to the state’s case.

“We haven’t really known anything about why George Floyd was addicted to drugs. We haven’t known that at all,” she explained. “Now we know he had some chronic injuries. He tried prescription pills, and then – like many Americans – he became addicted to the painkillers.”

Moriarty also said that Ross’ testimony may be used to explain Floyd’s tolerance to drugs, having struggled with addiction for some time.

“So the state is going to be arguing, yes, he had a high level of drugs in his system, but it didn’t kill him. It was Chauvin’s actions that did,” she said.

“As the defense attempts to construct the narrative that George Floyd’s cause of death was the Fentanyl in his system, we want to remind the world who witnessed his death on video that George was walking, talking, laughing, and breathing just fine before Derek Chauvin held his knee to George’s neck, blocking his ability to breathe and extinguishing his life for all to see,” Crump wrote.

“Tens of thousands of Americans struggle with self-medication and opioid abuse and are treated with dignity, respect and support, not brutality. We fully expected the defense to put George’s character and struggles with addiction on trial because that is the go-to tactic when the facts are not on your side,” he said. “We are confident that the jury will see past that to arrive at the truth – that George Floyd would have lived to see another day if Derek Chauvin hadn’t brutally ended his life in front of a crowd of witnesses pleading for his life.”