Ginseng poaching in the national park is nothing new, but rangers in the Smokies say the problem is different these days due to popular television shows and the drug epidemic. 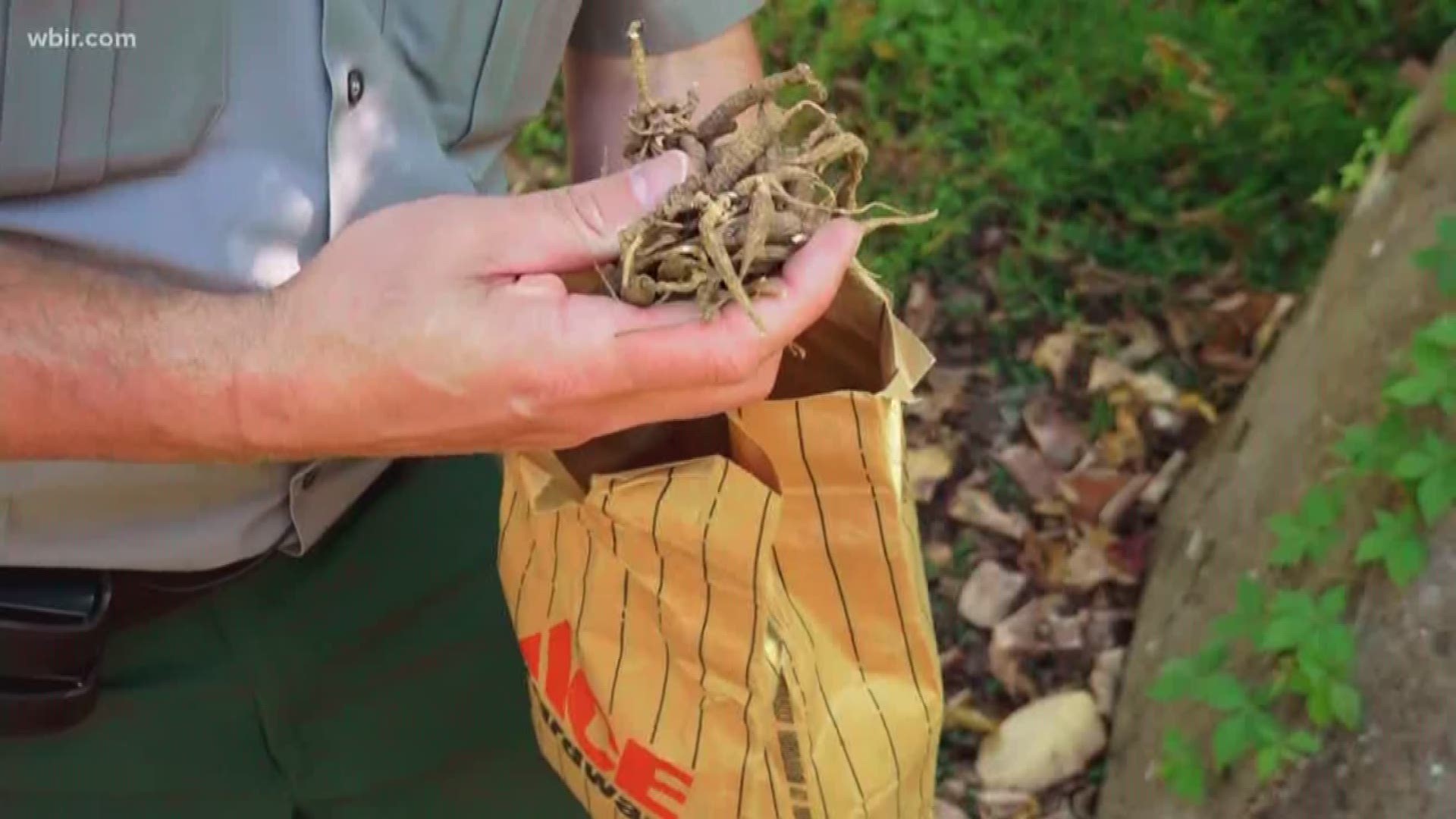 Forgive Steve Kloster if he feels a sensation of de ja vu when discussing ginseng. The chief ranger at the Great Smoky Mountains National Park has been repeating himself about the poached plant for around 30 years.

"I started working in the Smokies in the late 1980s and the message has not changed. There are times of year when you can legally gather wild ginseng if you are not inside the park. But It is always illegal to take any type of plants out of the national park," said Kloster.

Kloster’s message has remained consistent during his long career. What has changed through the years is the ever-rising price of the ginseng plant and the various motives that drive poachers to steal the root from the Smokies.

He blames some of the recent surge in park poachers on reality television programs.

"We’ve got these new reality TV shows out there glorifying and dramatizing going out and digging ginseng. Someone is sitting at home watching these shows and thinks they can go dig ginseng to make a quick buck," said Kloster.

Kloster said another recent difference is the number of arrested poachers who are also in possession of illegal drugs.

"Not everyone, but a lot more people we’re arresting have drugs (on them). Right now, that includes a lot of heroin, pills, and marijuana. They’re trying to make a quick buck so they can go buy their drugs. In the late 1980s, I saw very little of that," said Kloster.

There is money to be made on ginseng because the root is craved by people on the other side of the world. The Chinese are said to prefer wild ginseng from the rich soils of Appalachia due to its strong flavor.

Ginseng leaves turn yellow before many other plants in the mountains, making them easier to locate in late-September and early-October.

"The Chinese use ginseng root as a cure-all. They make tea from it. They also use it for energy boost, health tonic, aphrodisiac, and so on. And they want the wild stuff. There are ginseng farms that grow it in Wisconsin, but what they really crave is the wild ginseng," said Kloster. "It takes a long time for ginseng to reproduce. It takes several years for the seeds to germinate and then to grow into a mature plant. In the state of Tennessee, ginseng is a species of concern because it is commercially exploited."

The state of Tennessee licenses ginseng dealers. Kloster said the dealers pay hunters anywhere from $300 to $900 for a pound of the roots, depending on the supply as well as if the roots are wet or dry.

Outside the national park, some families have been digging ginseng for generations and were raised to harvest it responsibly and legally. Conscientious hunters gather ginseng in late September and October and only take mature plants with stems that have at least three prongs. They also only dig for ginseng when all the plant’s berries are red and ripe, so they can be buried in the ground where a root was harvested to keep the crop coming back in the future.

Yellow leaves and one red berry remains on a ginseng plant in the Great Smoky Mountains.

Kloster blames the reality television shows and drug epidemic for an influx of poachers with no regard for the maturity of the plant, the color of its berries, or the damage done to the habitat.

"Early in my career, we were trained that you don’t have to worry about ginseng poachers until maybe August or September. Now, we’re arresting people with ginseng in May and June," he said.

The green leaves of the ginseng plant turn bright yellow in September and make it easy for foragers to locate the valuable root. Rangers and park biologists are adding bright colors and metal chips to the plants to make it easy to spot roots that were stolen from the national park.

A variety of digging tools confiscated from ginseng poachers in the Great Smoky Mountains.

"Our marking program is a big deterrent factor. We add dye to the plants in the park that either make the roots orange or make it so they glow under an ultraviolet light," Kloster said. "If we catch you with these roots, no matter where you are, we know they came from Great Smoky Mountains National Park and can charge you with stolen property. Our hope is if the people buying ginseng see the marked roots, they'll will not buy that batch."

Ginseng is hardly the only plant illegally taken from the national park. Rangers also fight the commercial exploitation of wildflowers, moss, and mushrooms. Earlier this summer, rangers caught a man on the North Carolina side of the Great Smoky Mountains with a load of hundreds of large reishi mushrooms cut from the trees of the park.

Rangers arrested a man for illegally harvesting hundreds of reishi mushrooms from the Great Smoky Mountains National Park in the summer of 2017.

Punishment for poachers can include large fines, restitution, and incarceration. In recent years, some judges in North Carolina have sentenced repeat-offenders to several months in jail for poaching ginseng.

While marking programs and criminal punishments serve as a deterrent, Kloster said illegal foraging will remain a problem as long as the price of the plants persuades poachers the reward is worth the risk. Kloster said he’ll continue enthusiastically repeating himself to fight for the survival of the species in the Smokies for future generations.

"Once something is gone, whether it's an animal species or a plant species, we're never going to see it again," he said.