Gun expo show owner Rex Kehrli said this year's strong turnout to the show is in part because people are afraid their gun rights will be taken away. 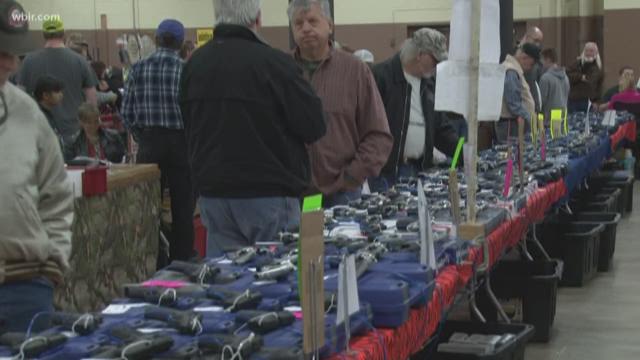 Hundreds of gun enthusiasts from all over came to Knoxville this weekend for the gun show at the Knoxville Expo Center.

They shared their opinions after several major retailers like Walmart & Dick's Sporting Goods chose to stop selling guns to people under the age of 21.

This was in response to the deadly shooting at a high school in Florida. Several gun shops in Knoxville said they will not raise their age requirements.

Gun expo show owner Rex Kehrli said this year's strong turn out to the show is in part because people are afraid their gun rights will be taken away.

His vendors sold guns this weekend to people ages 18 and up.

"I think if you're old enough and you're above 18 and you're a man or a woman who can go over and defend your country, I think that you absolutely ought to be able to have all the rights of any adult citizen in the United States," Kehrli said.

The expo's main clientele are hunters, sportsmen and gun collectors.

Kehrli said conversation on gun change doesn't stop people from buying firearms, and that 18 should be the age they can purchase guns.

That was echoed by another long time gun shop owner John Arnold.

The feeling is different among a younger generation of students, who say the effects of the Parkland school shooting are much more personal to them-- Students like 17-year-old Zoe Brookshire-Wrisley.

"When I was 7 a man walked into my church and killed two people with a shot gun," she said.

"I realize, and the people who stand with me realize, we're not going to get rid of guns in America. It's nor reasonable."

She does believe changing the legal age for purchasing guns from 18 to 21 is a big step.

"There's a lot of people that've said three years isn't that big of a difference, and I feel like that's a very valid point," Brookshire-Wrisley said. "But a lot of what this is doing is showing that these people care about who they're selling guns to."

While Kehrli doesn't agree with the age change decision, both he and Brookshire-Wrisley know this conversation is long from over.

"A good dialogue, everyone settles down and has a rational discussion, I think that'll be very welcome," Kehrli said. "We're all Americans, and we're all in this together, so let's solve it together."