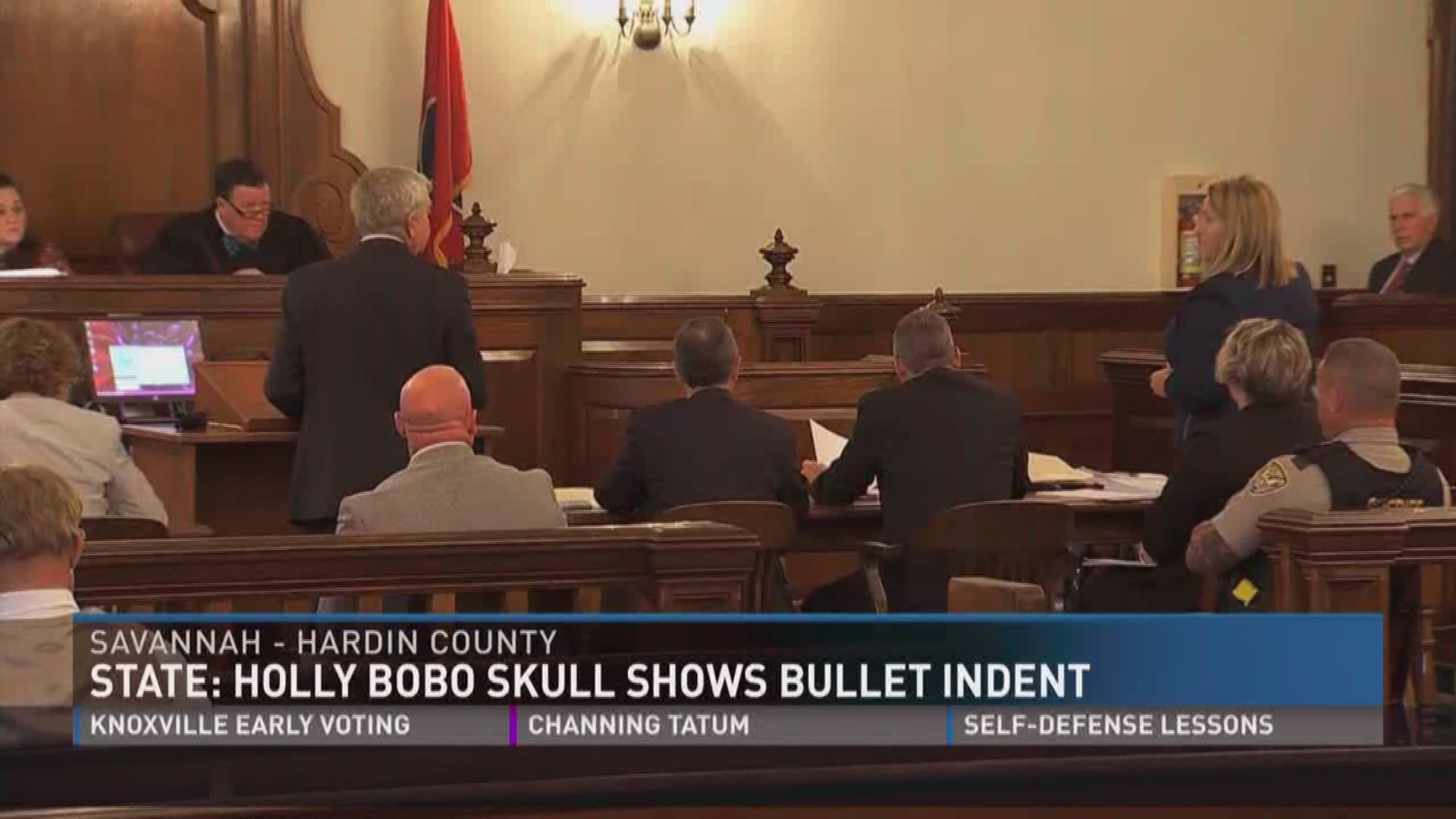 Larry Stone started crying on the stand when he remembered the day he found the remains of Holly Bobo.

It had been an ordinary day on Sept. 7, 2014. He was hunting ginseng roots in the woods of northern Decatur County with his cousin.

Then, after spotting a bucket turned on its top, he saw something else that sent a chill down his spine and caused him to break down in tears.

"Please tell me that’s one of those things they use in school, and that’s not real,” Stone said to his cousin.

Stone had come across what would be identified as Bobo's skull, which would lead to the discovery of other remains, as well as other items the public learned first Wednesday were found nearby. This included a wallet containing Bobo’s driver’s license.

One by one, prosecutors in the death penalty trial underway in Savannah, Tenn. called witnesses to the stand to lay out a macabre trail of clues leading up the the discovery of her remains. The prosecutions says the evidence points to her murder by defendant Zach Adams.

Adams is charged with the felony first-degree murder, especially aggravated kidnapping and aggravated rape of Bobo, a 20-year-old nursing student who disappeared on April 13, 2011.

Courtesy of The Jackson Sun

Adams, who has pleaded not guilty, is the first of three men to go to trial.

Also charged are Jason Autry and John Dylan Adams. Autry has been offered immunity to testify.

String of clues: The lunchbox

John Graves took the stand Wednesday morning to say he went to check the barns and wooded areas on his property on April 14, 2011, the day after Bobo disappeared, just in case there was a sign of her nearby.

In one of those wooded areas, Graves said he saw something out-of-place near a creek.

"It was something that just didn’t belong," Graves said. "I saw something polka-dotted, like a lunchbox or something, laying there."

Graves pulled the lunchbox out with a stick and opened it.

Inside he saw a sandwich, and when he flipped it over, he saw an embroidered "H."

It would be one of the first clues searchers would find on Bobo’s trail, and it was identified in court by Bobo's mother Karen Bobo Monday.

“In my mind, if something was found on Gooch Road, somebody was heading north of the county, and therefore, toward the interstate,” Stephens said. “I was traveling just south of Yellow Springs Church in the Yellow Springs community.”

In Yellow Springs, near the side of the road, Stephens saw something that he was looking for — something pink — just off the asphalt.

“I immediately stopped. It was a garment that was pink in color. It was a pair of pink panties,” Stephens said.

String of clues: Piece of paper

“The first thing I saw was the name and address, Holly Bobo, on the top left corner of the page,” Stephens said.

The paper was found just across the road from Shayne Austin’s neighbor’s home.

Emily Pratt, a friend of Holly’s from nursing school, also testified that she and a group of searchers had found a cell phone near McKenzie Tree Service on April 24, 2011.

“It looked like the phone I had used of hers,” Pratt said.

The SIM card from the phone was later found by Adnesha Brasher and her younger brother while riding bicycles on Camden Road in May 2011, who alerted Karen Bobo.

Still, while the other clues left a trail of Bobo’s final journey, it was the discovery of her remains that witnesses say pointed to foul play.

After the two ginseng hunters found Bobo’s remains on Sept. 7, 2014, Tennessee Bureau of Investigation Special Agent Laura Hodges said she and her team of forensic scientists responded the next morning and found dozens of items.

Courtesy of The Jackson Sun

Those items included a purse with car keys and makeup, a bag of pencils and an inhaler.

Additional human remains were found in the woods, according to Hodges’ description of a map of the woods shown in court, all of which were identified as belonging to Bobo.

Then, toward the end of the day, prosecutors called Dr. Marco Ross, a forensic scientist who conducted the autopsy, to the stand.

Ross identified a bullet hole that entered the back, right side of the skull and exited through the lower front.

When asked by the prosecutor for Bobo’s cause of death, Ross said it was unquestionably a gunshot wound, likely from a .32 caliber weapon.