Santa spends a lot of time at Santa's Claus-et, but you'll also see him around town. 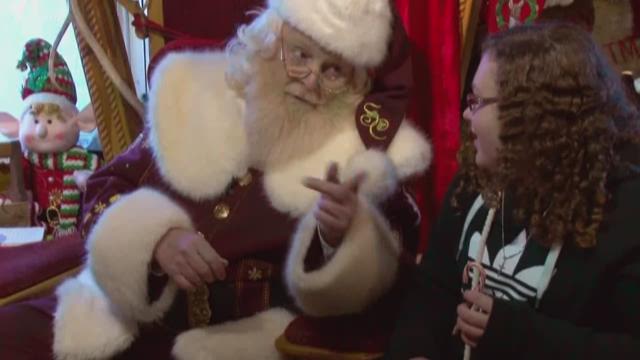 You may have seen his truck around town. It's painted red with a whole bunch of reindeer in the back.

The owner of the truck is a well-known Gatlinburg Santa who said he prefers his sleigh.

Santa has a certain way with adults and children, even those who are reluctant to share their Christmas wishes with him.

"The best that we can do is to listen to people's hopes and dreams and help share that hope and encourage them in whatever they are looking for in the holidays," Santa said. He sometimes goes by "Santa Pat" but said that can be confusing for children.

His job is all about conversation with children.

Santa and his wife give away hot cocoa samples at their Christmas store in Gatlinburg: Santa's Claus-et.

"The nice thing about this for Santa is we get to sample children from all over the country and some world visitors so we get a better idea of what toys need to be made ahead of time because you just can't make them all when the children start coming in at Thanksgiving and telling you what they want," he explained. "We like to think of ourselves as kind of a boutique Christmas store. We're not as big as some but we do try to find unusual things in my travels if I see something around the world if it's of interest we try to bring it in."

Santa spends a lot of time at Santa's Claus-et, but you'll also see him around town.

"I'm fortunate enough to be the Gatlinburg Santa. I do the Gatlinburg Parade which is coming up Friday, Dec. 1, at 7 p.m. in downtown Gatlinburg. This winter on Friday and Saturday nights I will also be at the new Anakeesta plaza here in Gatlinburg," he said.

The Choldala quad car and gondola cabin are not a big deal for a guy who drives a sleigh.

"That thing is much slower than a sleigh. Ho ho ho! And the reindeer, frankly, don't like to fly year round. We used to do a lot of that but then Homeland Security and flight rules and nothing scares a reindeer like a missile," he said.

Santa's Claus-et is open every day this season, except for one.

"Christmas Day Santa is very tired. The elves get a break and then on the 26th we get to start next year. Ho ho ho!"

As Santa heads in to his busiest season he offers this advice.

"If you're wild and crazy busy then give up something. Enjoy the holiday because that's the really special time of the year," he said.

Santa's Claus-et is on East Parkway near the entrance to Glades Road.