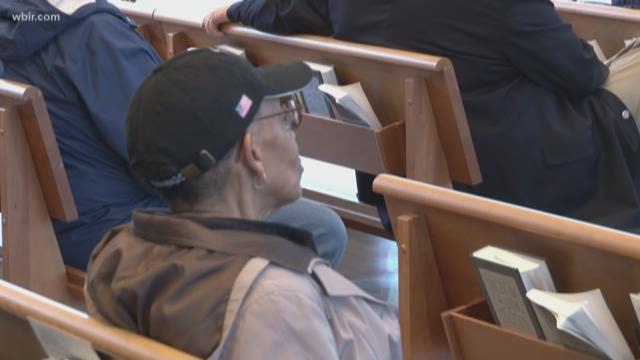 More than 200 protesters started chanting at the University of Tennessee Saturday in opposition to a scheduled white nationalist event on campus.

Marchers temporarily stop on the bridge to chant @wbir pic.twitter.com/3h97sbsfMF

A member of the Traditionalist Worker Party visited UTK's campus on Saturday as part of the "National Socialism or Death!" tour. The talk was led by the group's co-founder, Matthew Heimbach.

TWP is recognized by the Southern Poverty Law Center as a hate group and is one of many within the "Nationalist Front" coalition comprised of neo-Nazis, white supremacists and neo-Confederate groups.

"The First Amendment certainly does give people an opportunity to speak, to speak their peace, to speak their minds, to speak what they believe in," Chancellor Beverly Davenport said after the protests. "That's exactly what we were doing. They were able to come here because we have policies that allow that."

Protestors yelled, "the people united will never be divided," among other chants. Many protestors also raised signs reading statements such as "silence is not an option," and "improving communities without destroying others."

The University of Tennessee announced several security measures ahead of Saturday's events. According to the police chief of the University of Tennessee Police Department, Troy Lane, all officers with UTPD were on campus today to help with Saturday's event. Multiple authorities from Tennessee Highway Patrol and the Knoxville Police Department were also helping keep protests under control.

The TWP originally reserved space in the McClung Museum for Saturday. The university has said the group would be allowed to meet in Buehler Hall instead, an academic building on the Hill. UTPD Chief Lane says 52 people attended the talk including those from media. 10News did not attend the talk.

According to UTPD Chief Lane, there were six citations issues for protestors obstructing the roads, but no arrests were made in Saturday's events.

A security checkpoint was set up near Buehler Hall. Some student protestors refused to the checkpoint.

UT Progressive Student Alliance member Faith Held said she felt safer on the outside of the checkpoint.

"We're angry that we're paying for this area to be set up and secured," Held said. "We think that this is wrong. No one asked us, no one checked with us ahead of time. They kind of just did it."

Chancellor Beverly Davenport says the university is required to let the group speak, even if what they say may be offensive to some.

"I think we're saying to the nation that these people were not invited and they are not welcome," Davenport said.

She also mentioned she was content with the general peacefulness of the protest.

"They used their voices. They have all responded in ways that were most comfortable with them. I couldn't be proud of our students and our supporters."