Interstate 40 reopened one lane in each direction Thursday afternoon as crews continue to stabilize the cliff that collapsed and shut down the busy route. 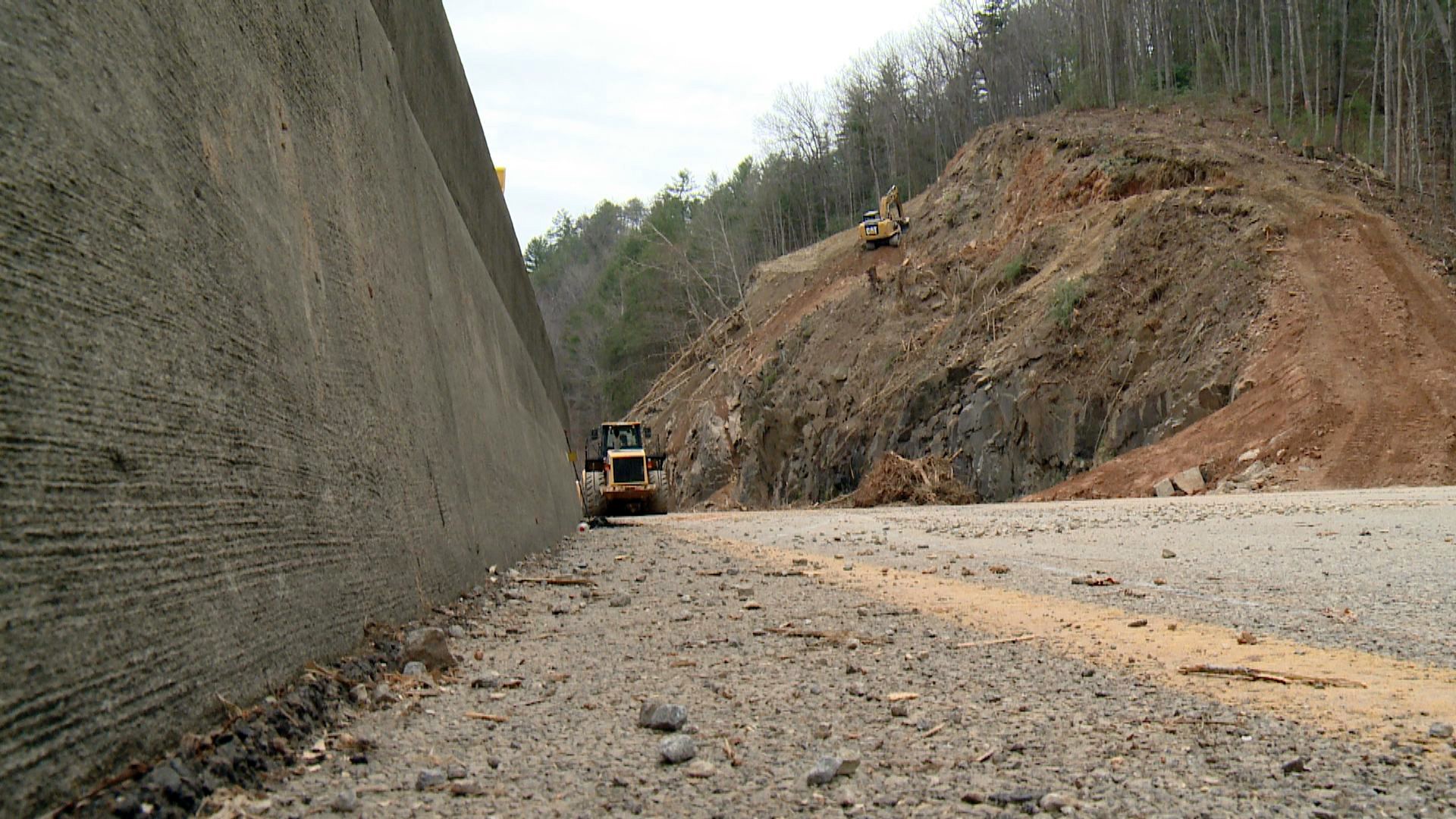 HAYWOOD COUNTY, N.C. — Update (2/28/19): The North Carolina Department of Transportation reopened one lane of I-40 in each direction at 1:30 p.m. Thursday. A rockslide a few miles from the Tennessee state line closed the busy interstate for six days.

The slide hit near the 7.5 mile marker of the interstate Friday night. Rocks damaged nine cars, but nobody was hurt.

After nearly a week of scraping loose material from the steep cliff over the interstate, NCDOT engineer Nathan Tanner says the site is secure enough for drivers to safely navigate in the far-lanes.  Crews plan to have all four lanes reopened by April 4.

"Unlike a lot of other slides we've had here in the past, this one was not primarily stone. Here it's just mostly earth material at the top of the slope. So once we remove it, it should be stable," said Tanner.

Until all four lanes are reopened, NCDOT says drivers should expect backups and delays.  Around 26,000 cars drive the stretch of I-40 every day and they will  now hit a bottleneck.

Credit: WBIR
Dirt and debris piles up along the cliff where crews are shaving away the slope where a rockslide close I-40 for six days.

"There will be a lot of construction going on down here up through the beginning of April, so you need to come through here and treat it as a work zone," said Tanner.

Engineers also dropped the speed limit through the rockslide area to 45 miles per hour.

"Just be safe and drive slowly and don't be distracted as you're driving," said Tanner. "We will have law enforcement on hand to make sure people are complying with the lower speed limit."

Credit: WBIR
Concrete dividers separate the two reopened lanes of traffic on I-40 where a rockslide closed the interstate for six days.

NCDOT says clearing the rockslide, stabilizing the slope, and repairing the interstate will cost around $2.1 million.

Original Story (2/25/19): Engineers with the North Carolina Department of Transportation worked Monday to remove dangling debris from the cliff where a rockslide has shut down Interstate 40 in both directions since Friday night.

The slide hit 7.5 miles from the Tennessee state line, around half a mile from the Harmon Den exit on I-40.

"Some of the rocks bounced across the barrier and nine vehicles were hit. Thankfully, there were no injuries. Just property damage," said David Uchiyama, NCDOT spokesperson.  "This project right now, they're going to scale and scrape away the debris to remove the loose material."

Credit: WBIR
NCDOT crews work to remove loose debris from the site of a rockslide that shut down I-40 in both directions near the Harmon Den exit on Feb. 22, 2019.

Drivers in Tennessee heading east on I-40 will hit a road block at the Waterville exit, around a mile from the North Carolina state line.

NCDOT says a couple of lanes on the interstate should reopen by Saturday, with a slight chance of reopening Friday.

RELATED: Aerials: See the rockslide that's shut down I-40 for a week near the TN/NC state line

"When it does open, there will be one lane of traffic in each direction. Folks will need to go slow and still expect delays driving through the Pigeon River Gorge," said Uchiyama.

It may take six to eight weeks for all four lanes of the interstate to reopen.

Credit: WBIR
Crews clear loose rock from the site of a slide that shut down Interstate 40 in both directions in North Carolina near the Tennessee state line Feb. 22, 2019.

In the meantime, the 26,000 drivers who normally use the stretch of interstate every day are being detoured an additional 50 miles on I-26 and I-81.

NCDOT is asking drivers to avoid using U.S. 25 that goes from Newport to Asheville through Hot Springs, N.C.

"Please, do not take 25.  The detour through Johnson City and Kingsport provides the accommodations that people need, should they have a mechanical failure, should they need food, and should they need gas. Also, trucks are not permitted to use the route through Hot Springs. Follow the signs, not your phone or your GPS," said Uchiyama.

Credit: WBIR
NCDOT is asking drivers to avoid using U.S. 25 and 70 through Newport and Hot Springs as a detour while Interstate 40 is closed by a rockslide.

This slide is just another chapter in a long book of stories about rocks blocking the interstate through the Pigeon River Gorge.  A massive slide in October 2009 shut down I-40 for several months.  Another notable slide closed the interstate for a few months in 1997.

NCDOT has done some preemptive work in slide-prone areas, including a huge project in 2015 that shaved away a long stretch of cliffs at a safer angle.

The site of the 2009 slide was drilled with several miles of large bolts to stabilize the cliff.  Engineers also installed deep underground sensors that are powered by solar panels. If the sensors detect instability, the devices automatically send a warning message to the cell phones of NCDOT engineers.

Credit: WBIR
Site of a massive 2009 rockslide in North Carolina, a couple of miles from the Tennessee state line, that closed I-40 for several months.