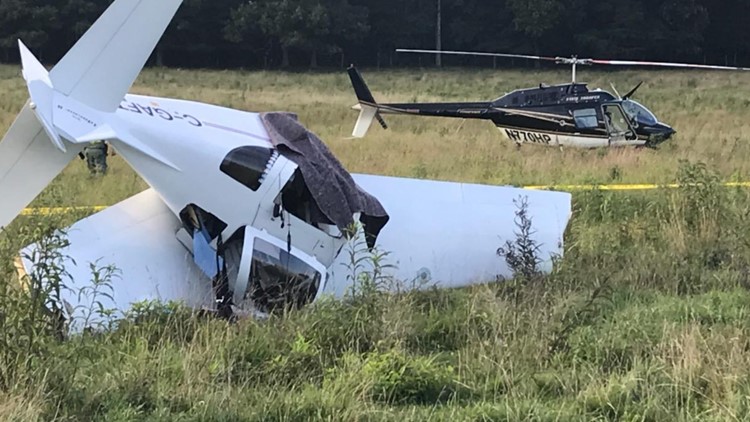 CHATTANOOGA, Tenn. — The FAA is investigating a plane crash on Cagle Mountain Wednesday evening that injured a pilot.

A spokesperson for the Federal Aviation Administration (FAA) said the pilot, Murray Alan Marien of Saskatoon, Saskatchewan in Canada, was the only person on board the Glasair II aircraft.

Sheriff Swanger said Marien was flying back from Georgia when he stopped for fuel at the Cleveland airport, and said he was forced to make an emergency landing in a field due to engine failure shortly after takeoff.

The Tennessee Highway Patrol and sheriff's office was notified of the signal coordinates, with lieutenant Brad Lund responding via a Jet Ranger helicopter.

Lund found Marien next to the crashed plane injured and lying on his back, saying he directed other first responders to the crash site.

The sheriff's office said Marien was alert and conscious, and tried to give them an idea of what happened.

"His words to us were that he had lost all power and that basically he was trying to look for a place to land and try to set it down, and I mean as you can see we're standing in a cow pasture here that's not level, and he actually flipped the plane several times," said Swanger.

LIFE FORCE flew Marien to Erlanger Hospital and he is listed to be in fair condition.

As we reflect on the recent events from yesterday and focus on Murray’s recovery, we would like to thank all the members of the first responder agencies who assisted with locating and treating Murray after the plane crash. From the United States Air Force identifying the crash site from the coordinates of the emergency transmitter beacon and notifying the Sequatchie County Sheriff’s Department to search the area to LIFE FORCE and Erlanger staff for stabilizing and treating Murray’s injuries. We are so grateful for the immediate response from all those involved and for the area residents keeping him in their thoughts and prayers.

The FAA is investigating the crash and the National Transportation Safety Board (NTSB) is working to determine the official cause.