The James White Parkway extension is the stop-and-go argument that refuses to exit Knoxville's rear-view. 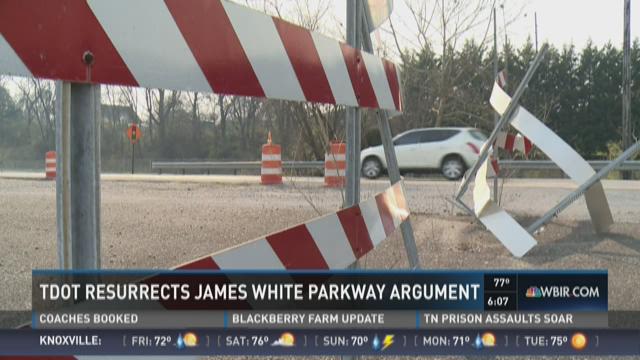 The James White Parkway extension is the stop-and-go argument that refuses to exit Knoxville's rear-view.

Almost three years after local leaders effectively killed a state proposal to extend the James White Parkway in South Knoxville, the matter is again stirring debate with city officials and transportation authorities about whether to resurrect the plan.

Earlier this week, Tennessee Department of Transportation Commissioner John Schroer told East Tennessee leaders that the state wants to make nearby Chapman Highway safer, but to do so would mean revisiting proposed work on the parkway.

Exit where the James White Parkway ends in South Knoxville.

The initially proposed extension would stretch the four-lane bypass to Governor John Sevier Highway and cost up to $140 million.

The letter said that improving the popular thoroughfare is limited because of its natural design, and to do so would cost as much as $60 million.

TDOT spokesman Mark Nagi told WBIR 10News on Thursday that the state’s solution for Chapman “has remained the same.”

Letter from TDOT Commissioner expressing concerns about Chapman Highway improvements after the decision to end the James White Parkway extension.

He called the highway a “challenging roadway” because of multiple changes in elevations, limitations in visibility and heavy traffic.

“There are things we can do on Chapman Highway but there is only so much we can do,” he said.

City officials, however, are adamant that the state’s solution is no good and would tear through the South Knoxville Urban Wilderness, the crown jewel of South Knoxville.

“We said that was not a priority for our region. There are so many projects locally and across the state that are already identified as priorities,” Knoxville Mayor Madeline Rogero said. “What we do agree on . . . is that safety improvements are critical on Chapman Highway. That’s where we should be focusing our efforts. That’s where we agree.”

City officials also noted that traffic hasn’t necessarily increased on Chapman Highway during the past 15 years. In fact, it’s actually decreased, according to TDOT records.

In 2000, some 32,730 vehicles traveled long Chapman between Moody Avenue and Stone Road, the stretch that James White Parkway travelers would bypass if the extension was built. In 2014, that number dropped to 28,400.

Roadblocks at the end of the James White Parkway in South Knoxville.

“We have never reached the traffic counts for the original rationale of the parkway relies upon,” Rogero said.

The renewed interest in the extension comes in the wake of a luncheon Schroer hosted Wednesday with officials to address regional transportation projects, their challenges and how they line up with the state’s budget.

During the luncheon, Schroer questioned why the Knoxville Regional Transportation Planning Organization, or TPO, voted to remove the James White Parkway extension from its Transportation Improvement Program in August 2013.

He suggested that officials reinstate it, particularly in light of the three deaths from a wreck that occurred along Chapman Highway near Simpson Road last month.

The state will not spend money on a project without the TPO signing off on it.

Rogero is a member of the TPO.

“I don’t understand if you can blast through ridges, valleys and neighborhoods for the James White Parkway extension, why you can’t do what you need to do to widen or improve Chapman Highway,” she said. “Clearly if you wanted to make Chapman Highway safer the state can figure out how to do that. We do it all the time for roads throughout the state.”

TDOT has tentatively set an April 21 public meeting to talk about ways to improve safety and traffic flow along Chapman Highway.

TDOT has provided the following details on projects in development on Chapman Highway.

2) From Evans Road to Burnett Lane - Project scope is to widen the roadway to 5-lanes (4 lanes with a continuous center turn lane), add left turn Lane at Simpson Rd. intersection, improve intersection at Sevierville Pike. Currently the project is in the engineering phase with the next phase being Right of Way. Earliest bid letting 1st Quarter CY 2017 (Knox/Blount Counties) pending available funds.

3) From south of Simpson Road to Hendron Chapel Road LM 1.00 to LM 1.98 in Knoxville - Project scope is to widen the existing roadway to 5-lanes (4 lanes with a continuous center turn lane) which would enable left turn movements for county roads and businesses along this corridor. There will also be side street intersection improvements to increase safety. Currently the project is in the preliminary engineering phase with the next phase being Right of Way. The Department is scheduling a public design meeting (tentative date April 21) for plans to be on display for public view and comment. Earliest bid letting CY 2018 pending available funds.