On Monday, a judge agreed to delay the preliminary hearing of accused kidnapper Gary Simpson to give him time to seek out a mental evaluation, spawning mixed reactions from his and Carlie Trent’s families. 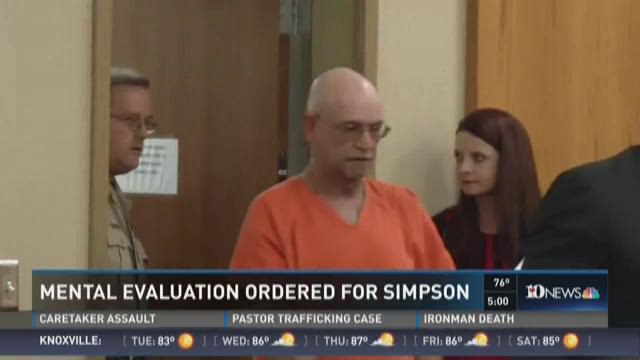 On Monday, a judge agreed to delay the preliminary hearing of accused kidnapper Gary Simpson to give him time to seek out a mental evaluation, spawning mixed reactions from his and Carlie Trent’s families.

Simpson faces charges of especially aggravated kidnapping and custodial interference after he and his niece Carlie Trent went missing for nine days.

Simpson is charged with custodial interference and aggravated kidnapping after he and his niece, 9-year-old Carlie Trent, went missing for nine days.

A Hawkins county judge agreed to delay the preliminary hearing until July 13 in order to ensure Simpson understood the consequences of his actions.

Carlie Trent’s mother was visibly upset at the decision, shaking her head as Simpson smiled and waved to his family members while exiting the courtroom. She and other relatives of Carlie told 10News they do not believe Simpson was battling mental health issues.

"I don't think he had any intentions of hurting the kid because he's helped take care of and raise her,” she said. “I just think he's out of reality. He doesn't know."

Fighting back tears, Salyers said she couldn’t believe Simpson would ever harm Carlie.

"He's been a good person all his life,” she said.

Simpson’s attorney Kyle Vaughn is also filing a request to reduce his bail from its current value at $1 million.

Original Story on May 22, 2016: The man accused of kidnapping a 9-year-old Rogersville girl is expected to return to court for a bond hearing on Monday.

Gary Simpson faces charges of especially aggravated kidnapping and custodial interference after he and his niece Carlie Trent went missing for nine days.

At Monday’s hearing, prosecutors will have to convince a judge there is probable cause Simpson is guilty.

Legal analysts say it might be some time before we see any real movement in this case, as the defense could move to waive or delay the entire preliminary hearing altogether. It would then go straight to a grand jury.

At Simpson’s first appearance last week, he questioned the judge about his charges.

"What I don't understand is I'm being charged with something that her dad's girlfriend did occasionally," he said.

Legal analyst Don Bosch says it wasn't the time or the place for him to argue the charges, but at the preliminary hearing his attorney will have the chance to challenge the evidence against him.

"Typically in a preliminary hearing, the defendant will put on no proof. But his or her lawyer will have an opportunity to cross-examine the state's proof," he said.

Among the proof we've seen so far: TBI's release of Save-a-Lot footage shortly after investigators say he picked Carlie up from school. The bureau also released footage of him at Walmart moments before the alleged kidnapping.

Right now Simpson is in jail on a $1 million bond. Simpson made it clear at his arraignment he has no assets and little savings.

For that reason, the judge qualified him for a public defender. Bosch says the district's public defense office has an excellent reputation, and he's expecting a fight.

"Particularly in the large cases, they tend to be very good, very well-skilled, and well-trained,” he said.