Jacobs also said the Board of Health and Knox County has been sued. He called an executive session with the board to discuss the matter on August 3. 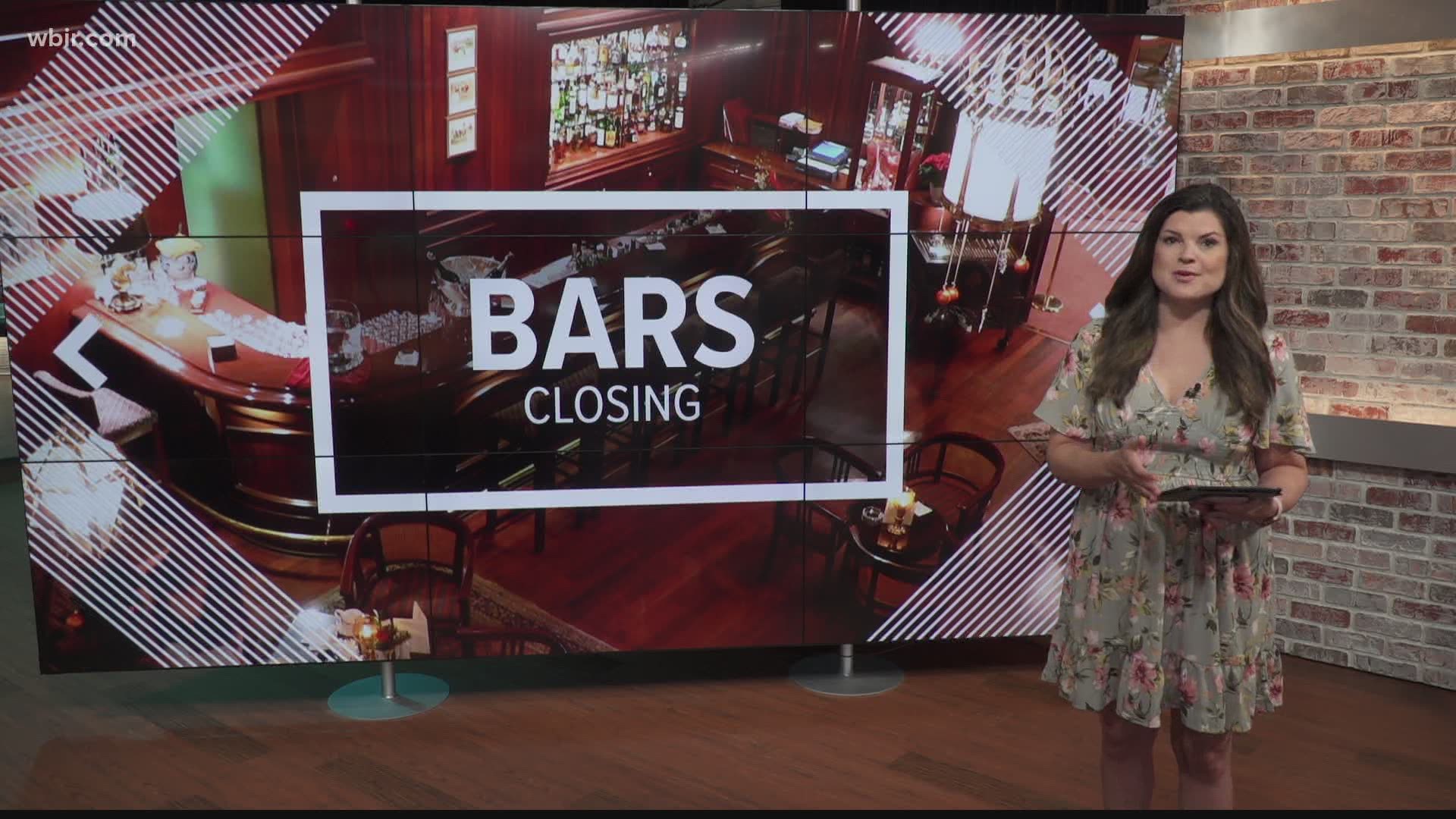 KNOX COUNTY, Tenn. — The Knox County Board of Health met Wednesday to discuss new measures to curb the spread of COVID-19 in the county.

On Wednesday’s agenda – the board was set to discuss the possibility of closing local bars once again. They approved the measure with a 7-1 vote. It goes into effect on Aug. 3 at 12:01 a.m. and will expire on Aug. 20 at 12:01 a.m. unless the board votes to renew it.

Knox County Mayor Glenn Jacobs was the only vote against the proposal.

The city council began by saying that the point of restricting bars was to limit risk points for spreading the coronavirus, reducing the spread and flattening the curve.

Maria C. Hurt, a clinical assistant professor at the University of Tennessee College of Nursing on the board, said that closing bars would help slow the spread of COVID-19.

"We are not elected officials, we do not have a political agenda," she said. "This virus does not care. Our job as the board is to try to stop the virus from getting the upper hand."

However, Knox County Glenn Jacobs said he had concerns about closing bars.

"My fear is if you blanket-shut bars down and the kids come back, they're going to party somewhere else," he said. "We can't regulate it all."

Hurt proposes regulation to close Knox County bars go into effect 12:01 am August 3 and that it will be reviewed regularly. It will expire 12:01 am August 20, unless board extends it further.

Martha Buchanan, the director of the Knox County Health Department, said that businesses have asked for more time to change operations and asked the board to push back the date when bars would need to close.

The board also spent much of the meeting discussing the difference between the definition of night clubs, restaurants and bars. Officials also discussed defining places that limit partying — where people gather in close quarters to drink alcohol.

Dr. Patrick O'Brien, MD, argued that breweries should be exempt because they have been following rules and worries what would happen if they were to be shut down saying many might not survive. "I'm just trying to protect one part of our economy that has been growing and doing a great job. I'm afraid we're going to lose a numb rof those businesses."

Buchanan replied that the board can't say what drinking establishment is or isn't a problem. "I've been to craft breweries and people go and gather. That's what you do at a bar. It doesn't matter what kind it is. I don't think we can make that distinction."

They also specified that citations would need to be from the Knox County Sheriff's Office, instead of directly from the Board of Health.

“I am grateful for the robust discussion by the medical professionals on the Board of Health," Knoxville Mayor Indya Kincannon said. "Navigating a global pandemic is something none of us have ever done before. Tonight’s actions are a step in the right direction. It’s important to remember that it’s the pandemic that is hurting our economy, not our efforts to curb it.”

Bars were not the only thing on the board's agenda. They also discussed the effectiveness of masks, transparency on the board and a recent visit of federal health officials after Knox County was named a "hotspot" for COVID-19.

Buchanan: One thing we have heard from businesses is to give them a little time to change operations, be compliant. I don't have a date in mind. The regulation says to start tomorrow night. Can we push it out further?

Mayor Glenn Jacobs opened the meeting proposing postponing the BOH session until the following Wednesday at 5 p.m. so it could be held in-person at the City-County Building with a public forum – saying it was “unacceptable” that people without internet in the county could not sit and weigh in on the decisions of the health board.

Jacobs also said the Board of Health and Knox County have been sued. He called for an executive session with the board to discuss the matter on August 3 with the county's law directors.

It was filed July 24 in Knox County Chancery Court by a lawyer on behalf of two Knoxville area plastic surgeons. The lawsuit argues the July 1 mask mandate by the Board of Health is "arbitrary and capricious" and unconstitutional.

It asks a Knox County chancellor to stop the order saying it's a violation of the doctors' rights.

Knox County Health Department Director Dr. Martha Buchanan had issues with the mayor’s proposal to postpone the meeting  – saying the space was not adequate for a public meeting due to challenges with COVID-19 and that the county commission had not been able to practice social distancing well in that space.

Buchanan: Based on the volume of emails, the turnout could be higher. Seats in the large assembly room are marked off. There's a potential to need to count heads. If someone speaks they may need to leave to clear up space.

Dr. James Shamiyeh with UT Medical Center also had concerns with delaying the meeting -- saying the evidence of case growth showed action needed to be taken sooner rather than later.

"Quite frankly, I think it would be irresponsible that we would delay any decision for a week in the public health environment we are in right now. I am personally not comfortable saying we are not going to do anything for a week," he said.

The board voted for holding the meeting as planned Wednesday.

Jacobs was adamant about holding an in-person meeting at the City-County Building at some point despite the board's decision for the sake of public transparency and input. The board said the meetings were being conducted with regards to Sunshine laws, asking if a public forum was necessary to meet those laws.

Dr.  Patrick O'Brien and others were not in favor of having large in-person meetings since Gov. Bill Lee's executive order allowed for open government meetings to be conducted over Zoom, saying if there is a desire to hear from people they should instead set up an isolated format at some location on a first-come first-serve basis to allow an online forum through Zoom. O'Brien said allowing potentially large group gatherings would run counter to the message of social distancing health leaders have been trying to reinforce for months.

Mayor Jacobs said he thought the board's idea was a "great compromise."

Environmental Health Division Director with KCHD Ronnie Nease then updated board on how they're handling complaints with masks, saying they are impressed with how well Knox County has been complying so far. The biggest concerns they've taken so far have been with lack of social distancing and lack of masks.

Nease said the county helps businesses with masks by providing them with signage and offering education. Since July 4, KCHD had 444 complaints of non-compliance. 247 were with permitted facilities and 197 have been against businesses. KCHD said compliance has looked good since the mask mandate, through, and since last week complaints were down to 80 and have been tapering downward with 38 this week.

The BOH said preliminary evidence shown the mask resolution put in place has been effective in slowing the rate of new cases. While cases have not flattened yet, it said the mandate has slowed rate of the outbreak from getting worse compare to places without mask mandates.

The BOH also provided updates on the recent visits from the CDC, TEMA, ASPR and the White House Coronavirus Task Force in the state.

The federal agencies flagged Knox County as a COVID-19 hot spot more than a week ago and took concerns from KCHD on poor lab turnaround time and capacity -- offering some limited assistance.

On Monday, the White House Coronavirus Task Force said Tennessee has hit a critical point much that could lead to a larger outbreak of COVID-19 within the state much like Florida and Texas -- should action not be taken to curb its spread further.

Dr. Anthony Fauci and Dr. Deborah Birx warned an outbreak could be brewing within the state given current case rise trends, saying leaders should take careful action as the U.S. "can't afford another surge."

Dr. Birx traveled to Nashville this week and urged all Tennessee mayors to issue a mask mandate and for Gov. Bill Lee to close bars. Gov. Lee maintains he is not planning on more business closures.