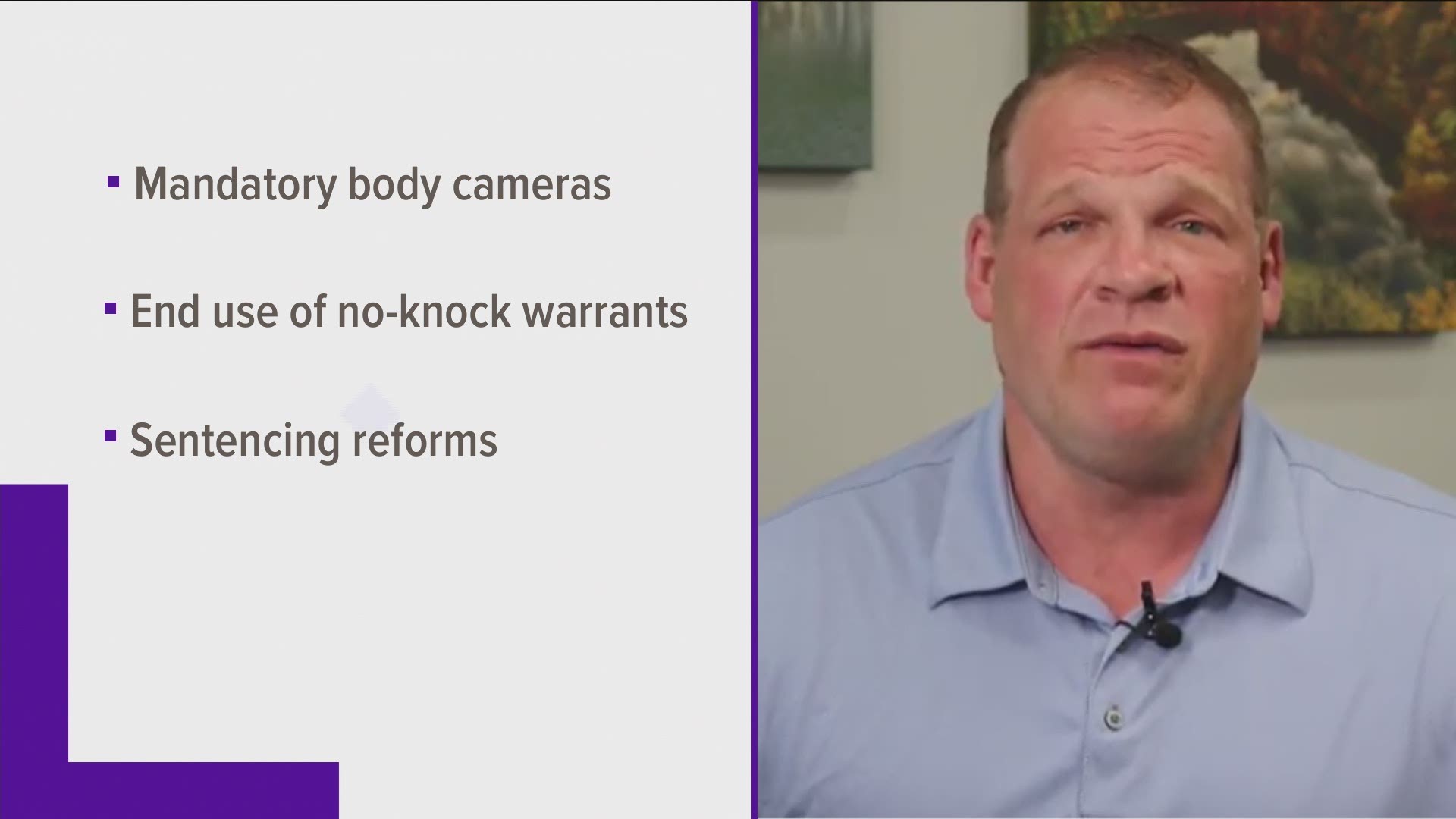 KNOX COUNTY, Tenn. — As people across the country clash in the streets and online over race relations and policing, Knox County Mayor Glenn Jacobs weighed in, setting his vision for the county.

In a video posted to the Knox County government's social media pages, Mayor Jacobs put forth ideas to reform law enforcement, but first rejected the idea of local change coming top-down from the federal government.

"Law enforcement is primarily a function of state and local governments, not the federal government," Jacobs said. "The last thing we need is another federal mandate."

Addressing nationwide calls by some advocacy groups to defund the police, Jacobs said, "That's not going to happen in Knox County."

Jacobs addressed claims by advocates who point to Camden, New Jersey as an example of a city successfully disbanding its police. The mayor counters those claims, saying while the police department may have been defunded, the officers were rehired as county employees, and subsequently grew in number.

Jacobs did express support for some methods of police reform, one which has been at the center of national protests in recent weeks.

"We need to end the use of no-knock warrants, which resulted in Louisville police killing Breonna Taylor," he said.

The wrestler-turned-politician said he believes body cams should be mandatory for all law enforcement patrol, adding that has already been policy for Knox County deputies for five years.

He supported reforming qualified immunity, which grants law enforcement special protections and privileges under the law. Jacobs said change is needed in that area to improve accountability.

Jacobs called for an end to civil asset forfeiture, which allows law enforcement to seize private property they claim is tied to a criminal investigation, even if the owner isn’t guilty of a crime.

Jacobs endorsed a federal bill introduced in the U.S. Senate by Kentucky Senator Rand Paul that seeks to stop militarizing law enforcement. The measure would limit the federal transfer of surplus military-grade equipment to state and local law enforcement to defensive equipment only.

Jacobs ended with a quote from Indian reformer and nonviolence advocate Mahatma Gandhi, a direct influence on Dr. Martin Luther King Jr., saying, “What is true of the individual will be tomorrow true of the whole nation if individuals will but refuse to lose heart and hope."

This week started high school graduations here in Knox County. As last year, I will attend all 18 ceremonies. Congratulations to the Class of 2020.

Thanks to Jim Snowden and his crew at Engineering & Public Works, we were able to hammer out an agreement with Knox County Schools to widen Coward Mill Road which will allow Schools to begin construction on the new Northwest Elementary School. I’m really happy that we were able to help schools make that a reality.

With everything going on, please don’t forget that Read City USA is still jetting around the world 20 times in 2020. So far, we’ve accumulated 406,000 hours read as a community. You can help us reach our goal of 500,000 hours by going to ReadCityUSA.com, download the Bean Stack tracker app, register using your Knox County Library card, and begin logging your reading hours.

Before I go, I’d like to offer my thoughts on this idea of defunding the police. First of all, I agree with an Op-Ed that Congressman Burchett recently wrote: law enforcement is primarily a function of state and local governments, not the federal government. The last thing states and localities need is more federal mandates.

So while certain communities might want to pursue a radical idea like defunding law enforcement, that’s not going to happen here in Knox County. The Knox County Sheriff’s Office is a top-flight, professionally run organization and I am proud of the work they do serving our community.

To set the record straight, what has happened when police departments have been abolished is that they are simply reorganized, reconstituted, or absorbed into another agency. For instance, folks point to Camden, NJ as an example of abolishing the police and the great results that it produced.

That’s not quite what happened in Camden.

While the police department was defunded, the officers were rehired as county employees. Part of the problem in Camden was the police union, which ended up protecting bad cops as well as hiking pay to the point that Camden, a city of about 75,000 people with some of the worst crime rates in the country had only 175 police and, during peak crime hours, might only have a dozen on patrol. Within a couple of years of “disbanding” their police, Camden’s police force had grown to 400 officers, well above the national average for a city of that size.

So I don’t believe that defunding the police is a good, or even remotely realistic idea. I do believe that we need some sensible reforms to our criminal justice system:

• Body cams should be mandatory for all patrol as they have been for KCSO officers for over 5 years.
• We need to end the use of no knock warrants (which resulted in Louisville police killing Breonna Taylor) and civil asset forfeiture.
• We also need to seriously consider sentencing reforms like mandatory minimum sentences and jail time for low-level, non-violent drug offenders.
• I can’t stress enough that we should defend our officers to the fullest as they perform their duties. At the same time, must reform the legal doctrine of qualified immunity to ensure accountability.
• I agree with my friend Senator Rand Paul who has introduced a bill in the US Senate seeking to stop militating law enforcement by limiting the federal transfer of surplus military-grade equipment to state and local law enforcement to defensive equipment only.

As policymakers, we should bear in mind that every law we enact must be enforced by some agency. Bad policy can result in unnecessary confrontations between our police and the public, potentially putting everyone at risk, and causing resentment on both sides. I have the utmost respect for KCSO, Sheriff Spangler, and all his officers. They put their lives on the line every day to make sure Knox Countians are safe in their homes and on our streets.

They deserve our respect and support.

These are uncertain and unprecedented times. As people move through periods like this, we often forget the uncertainty and the hardships our ancestors endured.

Think about the history of this country. This nation was founded as the result of a war with our own king after an extended period of crisis and turmoil and it didn’t stop right then, either.

We often forget the British burned down the White House in 1814.Forty-five years later, a bloody civil war set family against family and tore the nation apart. A Great Depression, a couple of world wars, and lots of crisis and upheaval and here we are.

To me, the most important thing we can do is to keep pushing forward and keep hope alive. That’s what will not only get us through all of this, but will make our community stronger and better when we emerge.

As Gandhi said, “What is true of the individual will be tomorrow true of the whole nation if individuals will but refuse to lose heart and hope.”

Until next Friday, I hope everyone has a great week.

RELATED: Road to be widened for new elementary school

RELATED: Teacher: 'I didn't want any child to not have someone who loved them'