The Knoxville City Council approved the pilot program Tuesday night. Not everyone in the community is pleased with the proposal. 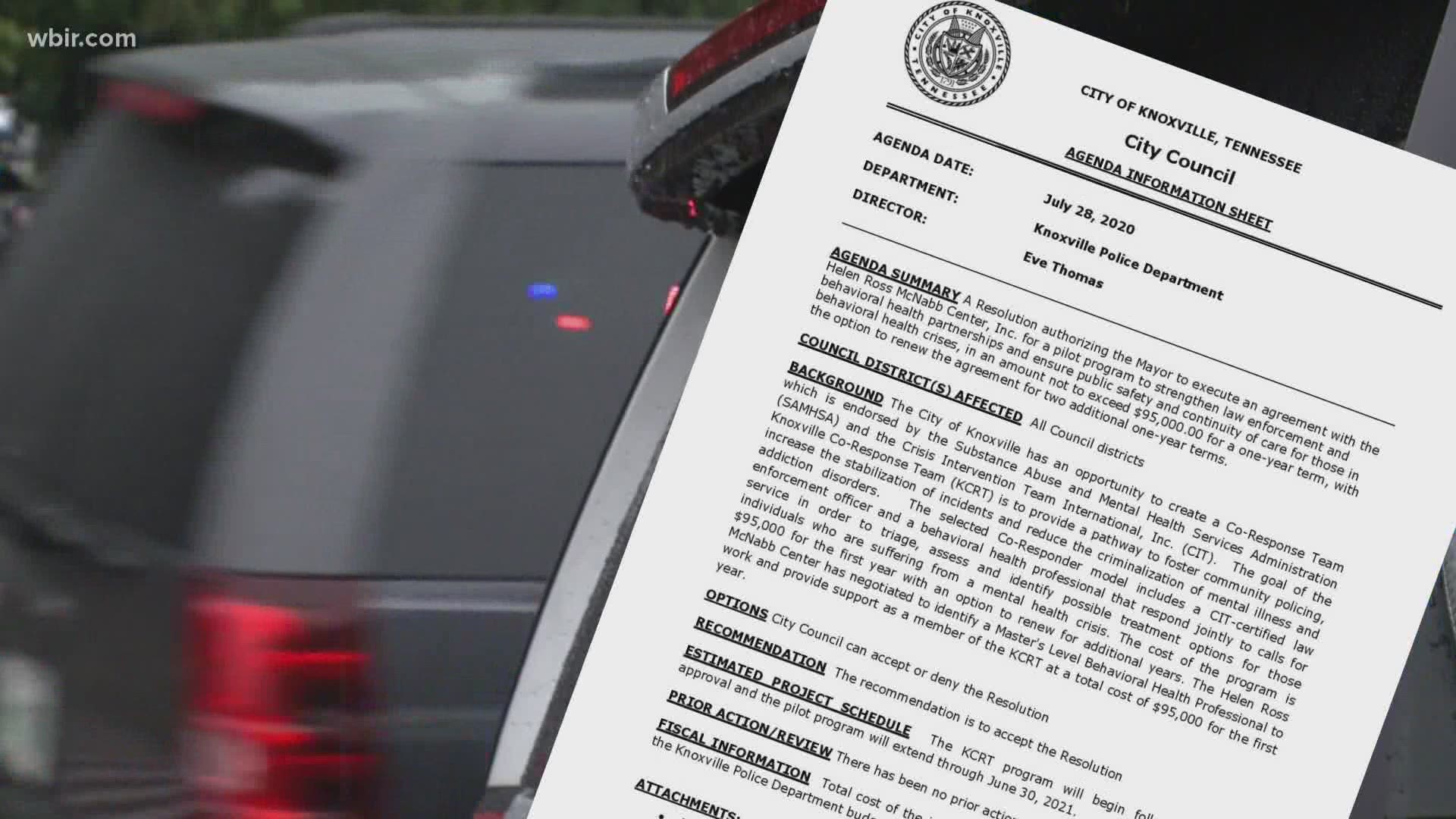 The Knoxville City County approved resolution 7716, which creates a co-response pilot program between the Knoxville Police Department and the Helen Ross McNabb Center. It allows a trained KPD officer and unarmed social worker to respond to mental health calls together.

Helen Ross McNabb and KPD presented the one-year pilot program to the city council in July. It's a technique already implemented and studied in cities across America.

"What we hope to do with this program is to jump-start an innovative approach to public safety that's been used successfully in other cities," Erin Gill, Chief Policy Officer for the City of Knoxville, said.

The initial program funds one behavioral health specialist who would work inside the KPD building and ride along on calls with a CIT trained officer. The two would work on shift and respond to calls together.

"I think any time we can pair a mental health specialist with a trained officer, the outcome for the consumer can only you know be positive," Candace Allen, senior director of adult intensive outpatient services with the Helen Ross McNabb Center explained.

"The behavioral health specialist can respond on the spot to triage, evaluate, and facilitate this person getting treatment in lieu of sometimes incarceration," Allen nodded.

But, not everyone in the community is happy with the $95,000 proposal. Black leaders, like Black Lives Matter activist David Hayes, said he knows people need help, but he doesn't want to see any expansion to the police department.

"We don't want to see policing transition from just enforcement from police officers to now with social workers and police officers still oppressing people," Hayes pleaded. "We need something new. We need an actual alternative."

RELATED: When protesters cry 'defund the police,' what does it mean?

Hayes said he would like to see the money allocated to other community programs instead.

Some social workers, like Licensed Master's Social Worker Amilia James, want to see the plan re-worked to exclude the police and incorporate voices of those affected by mental health and drug abuse.

"So what can happen is that we end up seeing people who have mental health issues as dangerous instead of people who need compassionate support," James explained.

RELATED: Expert offers advice on coping with changes, 6 months into the coronavirus pandemic

James also said she is fearful of social workers being "aligned" with police when they show up on scene. She said she would like to see the City Council vote "no" on the pilot to make way for a different model, as well as use more time to incorporate voices in the community who need to be uplifted.

Jerry Vagnier, president & CEO of Helen Ross McNabb Center said they are willing to make adjustments to the pilot program through trial and error as well as feedback from the community.

“Helen Ross McNabb Center regularly seeks feedback from clients, community partners and stakeholders about the effectiveness and impact of its programs," Vagnier said. "The Center adjusts programming based on this input – as we will continue to do during this pilot program – to ensure it is meeting the needs of individuals receiving services. As we prepare to implement this new service with KPD, we are already planning to seek input from the persons served, KPD and the community stakeholders as part of our quality improvement process.”

If the pilot program is approved, the city will use data collected from the first year to adjust and study the need in the community to better assist those who need help.

Both sides of the argument agree the need for mental health services in Knoxville is great and helping the community should be at the forefront.