Most people who struggle with infertility will tell you it's exhausting and incredibly painful.  Jerry and Amber Lacey would agree.  They endured failed treatments and a failed adoption.  The couple had almost given up their dream of having a child.  Then, they found another option not far from home. 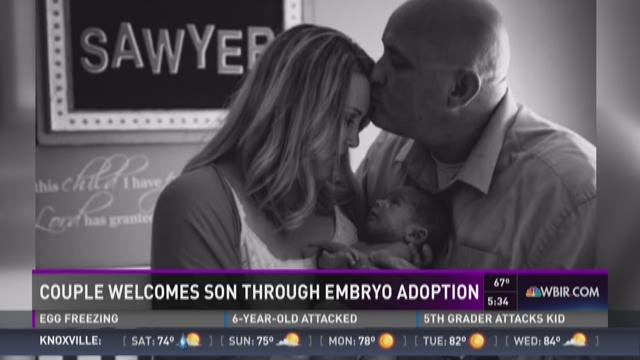 Most people who struggle with infertility will tell you it's exhausting and incredibly painful.
Amber and Jerry Lacey would agree. They endured failed treatments and a failed adoption in their quest to start a family.

They had almost given up hope, until they found an another option not far from home.

She and her husband, Jerry, desperately wanted to be parents.

MORE: Infertility a harsh reality for many couples

PREVIOUS: Many couples struggling to get pregnant turn to IVF

“The innate desire of most women is to know the feeling to bring life into the world and knowing that I might not be able to do that was pretty hard for me,” admits Amber.

“I'd seen this many times with her coming home and crying to me that it's just not fair,” says Jerry.

They started fertility drugs and even tried in uterine insemination.

“We failed miserably at those. Never got pregnant,” says Amber. “We hit the road block where the doctor said it's time to consider IVF. I knew I wasn't there mentally or physically. And, I told my husband that we needed time to think about it and pray about it.”

They took a year and a half break.

“Finally sitting in church one day we really just felt called to adopt," says Amber. "So we moved forward with a domestic adoption."

Unfortunately, the adoption fell through.

A friend suggested embryo adoption to them.

“I could carry my adopted child,” says Amber. “And, I thought wow that's a really cool concept.”

Amber was surprised to learn about the National Embryo Donation Center.

“We're Knoxville people and it was in Farragut,” says Amber. “Who knew!”

NEDC performs about 10 percent of all embryo adoption cycles in the country.

“We've had patients from almost every state and from a few other countries,” says Dr. Jeffrey Keenan, NEDC President and Medical Director. “It's a pretty straight forward process.”

Basically, donor embryos, typically from families who’ve been through in vitro fertilization, are transferred to recipients.

1 / 7
Amber and Jerry Lacey struggled for years to get pregnant. They chose not to try in vitro fertilization. A friend later told them about embryo adoption.
“They just take estrogen anywhere from 12 to 20 days and then begin some progesterone shots,” explains Dr. Keenan. “They have an embryo transfer a few days later and go back home. Then, they go back to their clinic and get a pregnancy test.”

According to Dr. Keenan, embryo adoption is not as involved as in vitro fertilization.

“Not nearly as many shots and blood tests,” says Dr. Keenan.

And, embryo adoption is cheaper.

“It's probably the most cost effective way to build a family,” says Dr. Keenan.

On average, recipients spend about $7,500 on the initial embryo transfer cycle.

And, NEDC is proud of its success rate.

In 2014, the center's delivery rate per transfer was 53 percent, 17 percent higher than the national average.

“We take patients up until their 46 birthday. And, we've done transfers the day before that 46 birthday and they conceived.”

The selection process for embryo donation is done both anonymously and openly.

“In the case of anonymous adoption, we give the couples all the profiles we have of the donors,” says Dr. Keenan.

Embryo recipients can chose everything from donor's hair and eye color to personality traits, hobbies, education, even professions.

“We've had couples who have undergone open embryo adoption who have become best friends,” says Dr. Keenan. “They see each other and talk on a regular basis.”

Amber and Jerry chose an open adoption, and their second embryo transfer was a success!

“I fell to my knees and I just praised God,” says Amber. “We came in for that 6 week ultra sound and there was a flicker of a heart beat. I just couldn't believe it.”

The day Sawyer arrived was even sweeter.

“That was the most amazing thing I'd ever seen,” remembers Jerry. “The first time I heard him cry… his little baby cry. They hand him to me and he's mine.”

“He is ours a hundred percent,” adds Amber. “And people tell us all the time how much he looks like us which is just God.”

Amber and Jerry still have other embryos they've adopted. And, they're considering a future transfer.

“I personally believe that God gives us this technology,” says Jerry.