Knox County Board of Education to approve agreement with KPD

The Board of Education meeting is set for 5 p.m. 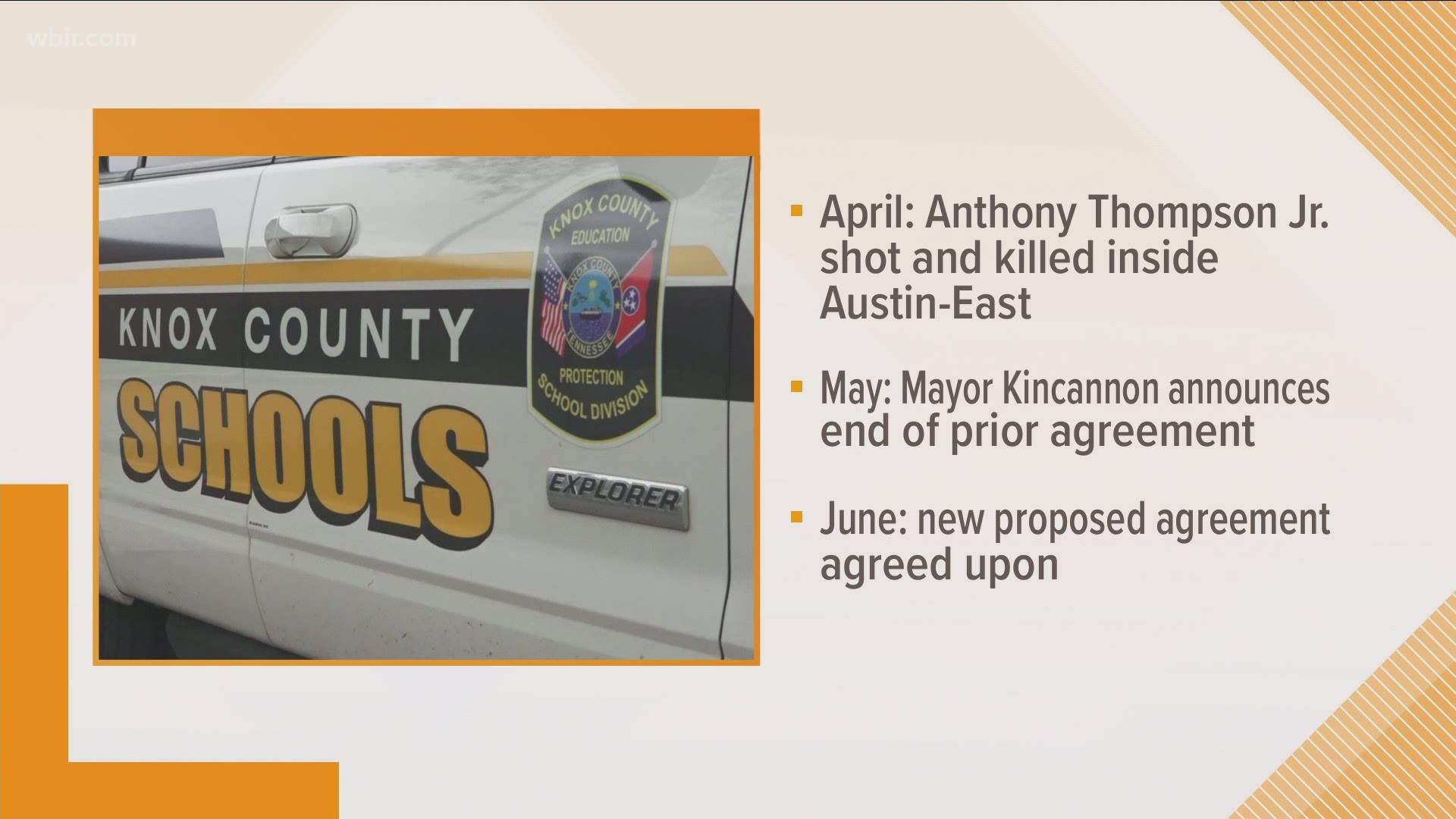 KNOXVILLE, Tenn. — UPDATE (July 14) The Knox County Board of Education is set to meet on Wednesday night. One big item on the agenda is the new school security agreement with the Knoxville Police Department.

Wednesday, the board will consider it.

In May, Mayor Kincannon announced that KPD's agreement with the school system would end in June.

The news came after police shot and killed an armed student April 12 in a bathroom at Austin-East High School.

After some back and forth, here's what's in the proposed new Memorandum of Agreement between the city and KCS.

The city would continue to deploy school resource officers to schools as "deemed appropriate" by the chief of police.

There's also a new language saying that school resource officers will not be allowed to engage in incidents involving students with special needs unless requested by the principal or their designee or unless there is imminent danger.

The Board of Education meeting is set for 5 p.m.

UPDATE (June 24): Officials with the City of Knoxville said Mayor Indya Kincannon and Knox County Schools Superintendent Bob Thomas agreed on language from a proposed new Memorandum of Agreement between the city and KCS.

The proposed MOA must be approved by the Board of Education. Officials said they will likely consider it during their June 30 and July 14 meetings. If approved, the agreement will be reviewed and need to be reapproved at the end of each semester.

Under the MOA, the city of Knoxville would continue to deploy school resource officers to schools as "deemed appropriate" by the Chief of Police. SROs would be guided to take action only as appropriate in the "least disruptive manner possible," saying officers need to notify school principals as soon as possible -- ideally before they take any law enforcement action.

Some notable changes also include how SRO's can intercede in incidents involving students with special needs. The memorandum said SROs are not allowed to engage unless requested by the principal or their designee, or if there is imminent danger of significant injury or loss of life. Otherwise, those incidents will be handled by trained school personnel.

You can read the proposed MOA at this link.

Breaking news:
The city of Knoxville says it has a new security agreement with Knox County Schools, which will keep SROs in school buildings.

Nearly 2 months ago, the mayor announced she was pulling out of the current agreement.

The school board must approve the new one.

In the interim, the Knoxville Police Department said it will keep resource officers in Knox County Schools for the rest of summer.

KPD said that school resource officers are at nine schools for their summer school programs.

Earlier, Knoxville mayor Indya Kincannon said uniformed officers would be pulled from the schools, but KPD said officers will stay in schools until a new MOA is approved.

“We are pleased that we were able to come to a proposed agreement with Knox County Schools. Lengthy discussion and feedback emphasized just how many people in the school community truly value our KPD officers. We are thankful for all of the input we received from parents, school staff and area leaders. We believe this agreement demonstrates a real commitment to keeping students safe.”

The Knoxville Police Department will withdraw its uniformed officers from Knox County schools after the end of the school year, Knoxville's mayor announced Wednesday, but that doesn't mean they won't be involved in future school security efforts.

Mayor Indya Kincannon sent a letter to the Knox County Board of Education Wednesday afternoon, saying KPD and the city will withdraw from its Memorandum of Agreement with the school system starting June 12, which is after graduation ceremonies.

"We may very well continue to have KPD officers in schools. We just want to have the conversation with our school leaders and with our school board members and other community stakeholders to see how that can best work out," said Kincannon in a late-night press conference Wednesday night.

KPD Chief Eve Thomas further clarified in a press conference on Thursday morning that her department was committed to working with Knox County Schools and protecting the children. She and other city leaders just believe it is time to reevaluate what that agreement looks like by hearing from community members and other stakeholders.

The news comes after weeks of protest and conversations about the role of police and uniformed security inside schools after a KPD officer shot and killed student Anthony Thompson Jr. during an armed confrontation at Austin-East Magnet High School last month.

RELATED: Protesters demand justice in death of Anthony Thompson Jr., call on leaders to work with community to end violence

The mayor said the district's security division has grown since it entered into the agreement years ago, saying it was time to engage in public dialogue about KPD's role in school safety.

Thomas said when KPD took a more active involvement in school security in 1999 after the shooting in Columbine, there were only 30 KCS security officers. That number has now expanded to more than 100 armed security officers that work for the schools.

The SROs are fully certified KPD officers in the patrol division on special assignments to the schools. They get special training to work as SROs, and if school is not in session, they are usually assigned to other duties.

Kincannon said that the memorandum was open-ended between KCS and KPD, and either could withdraw with a 30-day notice. She said that the addition of mental health professionals would also be good for students' socioemotional health.

Board of Education members met just hours after they received the letter. Some were frustrated by her decision.

"I am saddened by the decision she's made," said member Betsy Henderson.

Now it's up to the board on how to move forward with school safety.

"We do need security in our schools, but we need people who know how to work with kids and not people who are trying to work with criminals on the street. Our kids are not criminals," said member Evetty Satterfield.

"I spoke to every single one of my principals and they said they could not do their job without law enforcement," said member Virginia Babb.

Thomas said she understands that KPD officers in schools may not be the solution in every community, and that's why it's so important for the public to take part in this process and let their voices be heard.

Board members hope to have several community conversations on how to do that. Satterfield also emphasized that different communities have different relationships with law enforcement, and said that future policies should be aware of those relationships.

After speaking with the Austin-East Class of 2022, Satterfield said the police presence has to look different.

"They are okay with their security," she said. "They just want a meeting, a meet-and-greet saying, 'This is what we expect of our officers and this is how we operate.'"

Kincannon said she is thrilled that schools are investing in professionals after students experienced significant trauma due to recent gun violence and the shooting of Anthony Thompson Jr.

City officers will still remain ready to respond to any emergencies at schools.

Thomas was clear in stating that no matter what the future of KPD's involvement in security looks like, she remains confident in her officers' ability to respond quickly to any threat.

News:
Starting this summer, KPD will pull its officers out of Knox County Schools.

It comes weeks after a KPD officer shot and killed an Austin-East High student in school and in the midst of a Board of Education discussion about KCS security moving forward.

The school system is authorized to have 105 armed security officers. There are 93 officers currently hired, and there are 14 KPD officers serving as SROs.

The Knox County Board of Education met Wednesday to discuss the Memorandum of Agreement it has with the city and how to move forward with school safety. The board said it still wishes to re-negotiate its agreement and continue conversations about school safety.

"I do support the law enforcement in our schools with our school security officers. However, if the process can be improved upon, then that's what we need to do," KCS Superintendent Bob Thomas said.

Officials said that the Knox County Sheriff's Office has more than $3.5 million dedicated to school security in the budget. Sheriff Spangler said he has no plans to pull any of his officers that are currently assigned to schools.

"To be clear, these positions are meant to supplement and support the schools -- not replace security -- as I believe a law enforcement presence inside schools is an absolute necessity," he said.

A full statement from Superintendent Thomas is below:

My priority is to provide a safe learning and teaching environment for all our students and staff, and I am grateful to our law enforcement partners for their support in helping keep our schools safe.

I was surprised with the decision by Mayor Kincannon and Chief Thomas to withdraw from the MOA at the end of this school year; however, I am grateful that they are willing to have further conversations about it. We will also be having more discussion regarding the MOA with our Board, which has expressed a desire to get community input, something that I support.

Knoxville Mayor Indya Kincannon said KPD and the City of Knoxville felt it was in its best interest to withdraw from the Memorandum of Agreement effective June 12. The timeline allows for SRO's assigned to a school to complete the school year through graduations.

She also said that a shortage of officers continued to be an issue for KPD, while Knox County Schools has the staff to provide an appropriate level of coverage within schools. They also said that KPD will continue to respond to schools whenever officers are needed.

Part of her statement is below:

KPD and City leaders will participate in the discussions with Knox County Schools regarding a proposal to rework the current MOA, while all planned SRO training will proceed as scheduled through the summer. The hope is that those conversations can lead to a solution that works best for all parties involved and creates the most safe and healthy learning environment for the students of Knoxville.

In a conference later on Wednesday, Kincannon said that discussions may lead to a new Memorandum of Agreement and said she wants the roles and responsibilities of SROs to reflect current circumstances. The discussions with the school board and other stakeholders will take place over the summer.

She said she would consider reinstating KPD officers if the school board decides it is what's best for students. Changes in the new Memorandum of Agreement would include community discussion, she said.

I’m releasing a statement at this late hour in response to the many calls, emails and requests I’ve received this evening in reference to officers being pulled from some Knox County Schools. I took an oath to protect all Knox County Citizens. I will abide by that oath as will our Deputies. We will continue to protect our most vulnerable, which is our children. I am NOT pulling any of our Deputies out of any Knox County School that we are currently in.

This story was updated to say that the school system is authorized to have 105 officers, but only 93 are currently filed.