The bike share program will bring 200 bikes available for rent at around 30 rental kiosks around the city. 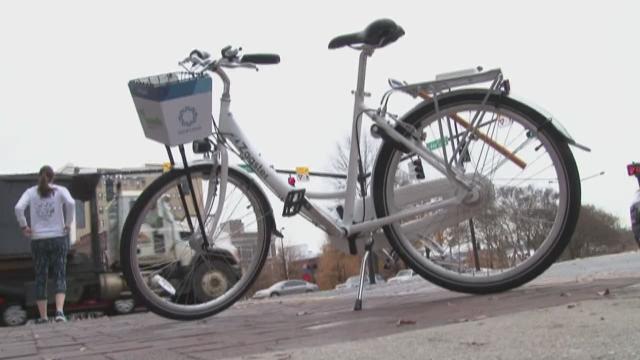 There's a new way to get around downtown Knoxville!

Knoxville's new bike share program is now operating, so you can download an app called Pace in your app store and check out a bike.

“It's kind of like a very new way to look at bike sharing. So folks who have seen it before they would check it out at a kiosk and have to return it to that kiosk. That's not this system. Our system is strictly driven by an app. And all the technology is driven in the bike."

The streets of Knoxville will soon be filled with a lot more bicycles thanks to a bike share program coming to the Scruffy City in February.

The bike share program will bring 200 bikes available for rent at around 30 rental kiosks around the city.

"When we put this into the community, people are going to feel it, they are going to be curious about it, and I think they’re really going to engage with it," said Kim Bumpas, president of Visit Knoxville. "It’ll be downtown centric, we’re going to involve the University of Tennessee, we’ll even have stations on all of the outskirts. There will be locations north, south, east and west."

But this bike share program will be far different than most around the country.

A new system by the bike share company Zagster called "Pace" will allow riders to drop off or pick up their bike at any kiosk or bike rack around the city. You will not have to drop off the bicycles at the same place you picked them up, or even one of the 30 kiosks.

"It’s not like you can just drop the bike on the side of the road and think it’s OK," Bumpas said. "I think people will really use the kiosks a lot. But for those rare occasions that you got to your destination and you decided that you can’t ride all the way back to the kiosks, the program will allow you to check out of the bike at that location."

It will cost $1 to rent a bike for 30 minutes. The bicycles have three gears to help riders get up and down the hills.

"It is a hilly city, but these bikes are designed for that," Bumpas said. "They’re three gear bikes, so that’s going to be a little different that just your typical commuter bike."

"I think it’s going to be a great amenity for city residents as well as visitors to check out our city via a more active mode of transportation," said Erin Gill, director of sustainability for the city of Knoxville. "This was an option that was a public private partnership that allows the city to bring a program like this to the community without having to incur those direct costs."

There is no set date for when the bikes will hit the streets, but city leaders hope to have the program up and running by February.