Knoxville Police have stepped up efforts to make areas like the Old city and Market Square safer -- and nuisance free -- for everyone. 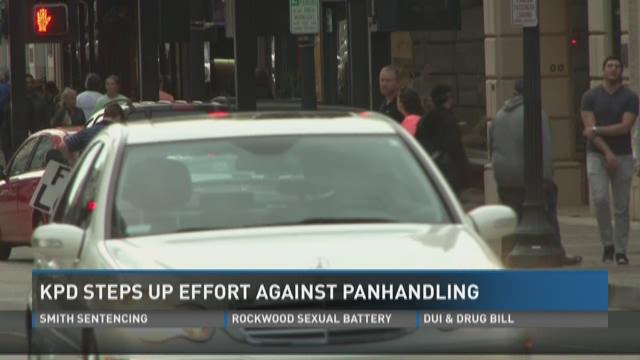 Aggressive panhandling. It's something nearly everyone who's been to downtown Knoxville has experienced.

Knoxville Police have stepped up efforts to make areas like the Old city and Market Square safer -- and nuisance free -- for everyone.

“Overall it's been incredibly positive,” according to downtown resident David Owens.

This month, KPD has launched a new effort to stop panhandling in downtown. The operation runs every Friday night and has led to a total of 14 charges or arrests.

Those crimes range from aggressive panhandling to public intoxication and even indecent exposure.

“A side effect of living downtown in any major city - you're going to run into panhandling,” explained Owens.

A bigger concern is violent crime like the Monday night assault of a woman in the Market Square parking garage.

Donald Thweatt, 46, is accused of assaulting a woman and causing a cut near her ear and a possibly broken jaw. He's charged with aggravated assault and public intoxication.

“I grew up in Knoxville, so I remember there was a time when you didn't come downtown after 4 o'clock,” said Clancey’s Tavern and Whiskey House General Manager Greg Lequire.

He appreciates the increased police presence and doesn't believe panhandlers are keeping anyone from coming downtown.

“It's not ever a deterrent, it's not something I think people become uncomfortable dealing with,” said Lequire.

With major events like the Big Ears Festival coming up and more people expected to visit downtown, residents believe common sense can go a long way when trying to stay safe.

“Male or female you don't walk alone at night, you don't walk into unlit areas, have somebody with you at all times and you really shouldn't have any problems,” said Owens.

In a statement to 10News, a spokesman for Downtown Knoxville said the area is safe based on crime data. but it's important for people to know how to help, not enable the homeless and understand that it's okay to tell people "no."