You can see emergency blue light phones all across UT's campus. Because they're barely used, there are questions whether their value is worth the cost. 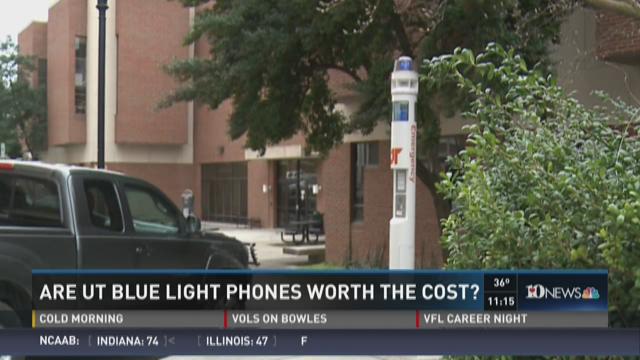 (KNOXVILLE) About 158 emergency blue light phones stand on the University of Tennessee campus, but both students and police can't remember the last time they've been used in an emergency.

"No, no one that I know has ever needed to use them," UT student Rachel Collins said.

Blue light phones stand tall to easily be seen by someone in need. At the push of a button, a call for help is sent to university police.

“Back in the old days before cell phones, there really wasn’t much of a way to get ahold of us unless you could get into a building and find an actual landline phone," Lane said. "I think blue light phones were initially seen as an easy way to get people’s attention and provide that easy access to the police.”

UT police test the phones weekly, and university officials said there is "virtually no maintenance cost."

With hardly anyone using them, Chief Lane has questioned whether the phones are worth paying for.

“One phenomena that I’ve seen across college campuses across the US is a lot of campuses that are starting to do away with their blue light phones, and mostly because every student on campus is carrying a cell phone," Lane said. "It’s something I know I’ve discussed openly."

But he doesn't see the more than 30-year-old technology going anywhere soon.

"It makes people feel safe when they’re walking around at night and they see a blue light phone in the vicinity," Lane said.

"In senses of emergency, I don't always know if I'd be able to get to my phone if it's in my purse or I have to unlock it and call 911," Collins said. "Even if they're not in use, they're a good thing to have."

"I think that they do make me feel like a lot more safer knowing that whichever blue pole you're at, you can always see another one," UT student Abby Smith said.

Despite the safety feature's lack of use, UT police do use the phones for one real reason a few times per year.

"If we had to lock down the campus, an emergency tornado was coming through campus, we have the ability to talk over those throughout campus," Lane said.

The phones are the only way to broadcast a message across the entire campus.

"The only other place we have that ability is on top of the stadium," he said. "That may or may not reach across the campus, but if we can touch all those blue light phones, we stand a much better chance of communicating with everybody.”

Although the phones are here to stay, Lane suggests students take advantage of smartphones. Every student seems to have one.

The Guardian app is part of UT's alert system.

“What I would not want to see is a student who has a cell phone in their hand worry about where the closest blue light phone is in an emergency," he said. "You’ve already got something right there in the palm of your hand to let us know that something’s going on.”