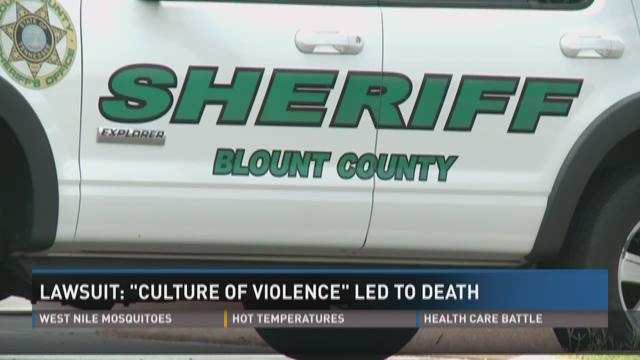 A federal lawsuit alleges the Blount County Sheriff’s Office fosters a “culture of violence” that led to a man’s assault and death last year.

Anthony Edwards suffered fatal head injuries and broken ribs in July 2016 after being "slammed” to the ground by a deputy, the lawsuit alleges.

The document was filed by Courtney Adams, the mother of two children by Anthony Edwards, as well as Edwards' mother, Kim Huskey.

It was filed in U.S. District Court in Knoxville on Monday, records show.

An attorney for Blount County could not be reached for comment Tuesday.

Attorney Troy Bowlin Jr. of Knoxville filed the action on behalf of Edwards' survivors. He issued a statement Tuesday.

"The Bowlin Law Firm, Knoxville Civil Rights Division continues to investigate the details leading up to and surrounding the unfortunate death of Anthony Edwards. Our complaint lodged in the United States District Court for the Eastern District of Tennessee reveals some of the details of our firm's investigation up to this point. We will continue to develop specifics through the process of the court as we look forward to trial, where we will be able to publicly present what occurred on July 25, 2016," the statement reads.

Edwards of Pigeon Forge was walking with someone else near Winchester Drive and Patterson Road in Blount County the night of July 25, 2016, according to the lawsuit.

Deputy Jerry Burns saw them and stopped them, the document states. Edwards didn't want to speak with him and then tried to flee. Burns gave chase, deploying his Taser at Edwards' back.

Burns then "grabbed Mr. Edwards, raised him up and violently slammed his head onto the concrete pavement," according to the lawsuit.

According to the Sheriff's Office at the time: "Deputy Burns took Edwards to the ground, and as they came down, Edwards hit his head on the pavement."

The lawsuit alleges that was a lie. According to the document, Burns admitted that night he'd "slammed" Edwards to the ground.

Burns' body camera stopped working for whatever reason during the encounter, according to the document.

During the ensuing moments, according to the lawsuit, Burns' supervisor tried to justify the stop by trying to find out if Edwards faced felony warrants in Blount and two other counties.

Blount County and its officers are liable for confronting Edwards without probable cause and for using excessive force, the women allege.

"As a result of the use of excessive force on Edwards, Edwards lay on the ground conscious and suffering for over half an hour, waiting for the arrival of an ambulance to transport him. Over an hour passed after the arrival of the ambulance while they waited for LifeStar to arrive to take ... Edwards to the University of Tennessee Medical Center where he died the following day from his injuries," the lawsuit states.

The lawsuit names Officer James Patty as among those called to the scene to help Burns. Patty last year was fired by Sheriff James Berrong amid allegations that Patty drove to North Carolina for what he thought would be a tryst with an underage girl.

The lawsuit seeks millions in damages from the sheriff, the county and others.

The lawsuit also alleges the Sheriff’s Office put out false and misleading information about Edwards’ arrest to try to cover what they’d done.