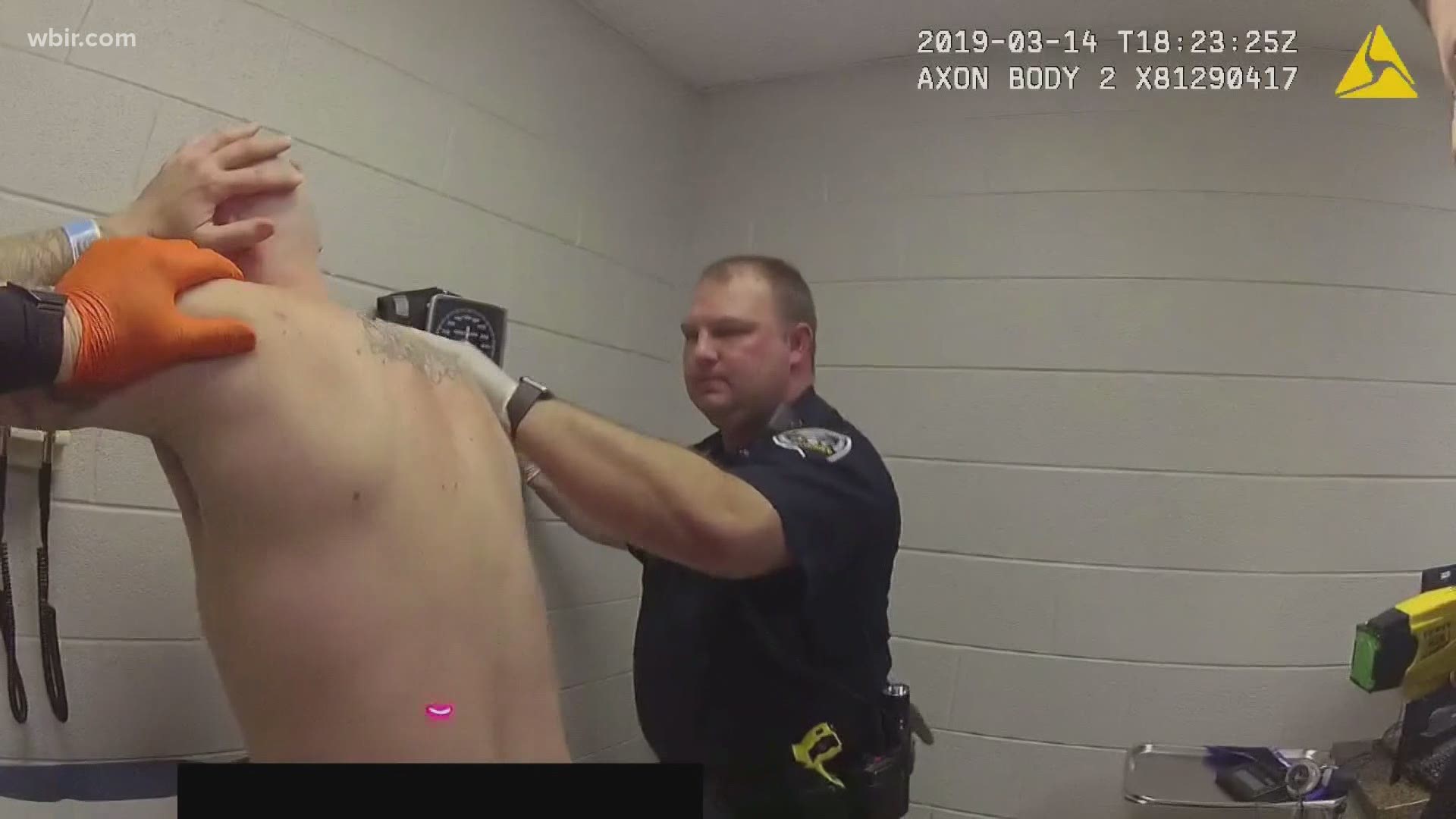 KNOXVILLE, Tennessee — Lawyers for a former Knox County inmate Tased as he reached around to remove a bag of drugs from his rectum say several officers used excessive force during a March 2019 confrontation.

Baker said Knox County Sheriff's Officer Lt. Josh Smith ordered Easterly during a strip search to take out drugs he'd hidden in a plastic bag but then Tased him as he began to comply.

"He (Easterly) wasn't a threat to anybody," Baker told 10News on Wednesday.

Said Hedrick: "That's the kind of force you would use against someone with a pistol."

WBIR obtained a copy of bodycam video of the incident in a records request. The lawyers said it contradicts formal reports filed by officers who were involved.

Easterly, of Oak Ridge, seeks $1 million in compensatory damages and $2.5 million in punitive damages. He's currently an inmate at the Hardeman County Correctional Facility serving a sentence for bringing contraband into jail.

The Knox County Sheriff's Office declined to comment about the pending litigation.

According to Hedrick, Easterly wanted to sue the county and officers in part because he later learned KCSO was using the video for training purposes on how not to use a Taser.

Hedrick said his client didn't have a history of resisting while in custody.

Credit: KCSO
Smith and other officers while Easterly is on the floor.

Hedrick said Easterly knew he'd been wrong to have the contraband, but he also was trying to cooperate.

"He had a very clear feeling that he did something wrong, but it wasn't fair," he said.

Easterly has an arrest record that stretches back more than 15 years and includes burglary, theft and robbery charges.

While an inmate at the Knox County Detention Facility on Maloneyville Road in 2019, officers brought him into the medical unit and confronted him.

His pants were lowered such that he was nude.

As two officers held him, Smith leveled a Taser at Easterly's back, the video shows.

"Here's what's gonna happen," Smith told Easterly on the video. "You're gonna be given the option to reach back there and remove those drugs. And drop that bag on the floor."

Credit: KCSO
Taser trained on Easterly as he's on the floor.

Easterly tried to argue, then conceded he might have one pill. When he moved slightly while standing in place, the officers warned him to face forward and that he was "getting very close to being Tased."

Smith said the officer on Easterly's left was going to let go of his hold on Easterly's hand and that Easterly was to reach back and pull out the baggie.

"If you do anything else, I'm going to Tase you. Do you understand?" Smith said.

The video shows Easterly begin to reach around to his rear and then Smith grimaces and fires the Taser. Easterly cries out in pain and as he reacts to the Tasing with the metal prong embedded in his back, he goes to the floor.

Officers swarm around him with cuffs as he's on the floor, the video shows. A different officer identified as Adam Bakker applies a Taser to Easterly's body, the lawsuit states.

The inmate also was punched and hit in the face with a chemical spray.

Credit: KCSO
Easterly in the chair.

Eventually, the officers put Easterly's pants back on and a nurse digs the metal prong out of his back, the video shows. The inmate ends up with a spit mask over his mouth and he's seated for a time in a chair before being led from the room, the video shows.

The lawsuit alleges Easterly was then put in solitary confinement for 90 days. No internal investigation was conducted over the incident, according to Baker, and no one was disciplined.

Several of the men including Smith used excessive force during the encounter, the lawsuit alleges.

KCSO lacks proper training in such circumstances, the document states. If it's true that the bodycam video is now used for instructional purposes on how not to act, that's further proof of the department's ineptitude, Baker and Hedrick said.

Being stripped and exposed to the view of numerous people including passersby in the building was humiliating and illegal, the lawsuit states.

"Even if the policies and procedures regarding the use of force by corrections officers against inmates do not themselves violate federal law, there is and was -- at the time of the violent encounter between plaintiff and corrections officer -- a persistent and widespread practice among KCSO corrections officers of using excessive force on a subject when it is unnecessary and objectively unreasonable as a matter of law to do so..." the lawsuit states.

After the incident, authorities moved Easterly from the Knox County Detention Facility to the downtown jail, according to Hedrick.

Easterly pleaded guilty in July in Knox County Criminal Court to the felony contraband charge. He was hiding suboxone, according to Hedrick, who represented him in the criminal case.

Prosecutors dropped a charge of assaulting a public employee that KCSO had filed against him after the March 2019 incident, records show.