A Loudon County farmer says she thought the crowd greeted President Trump warmly in Nashville Monday, and she was happy with what he said. 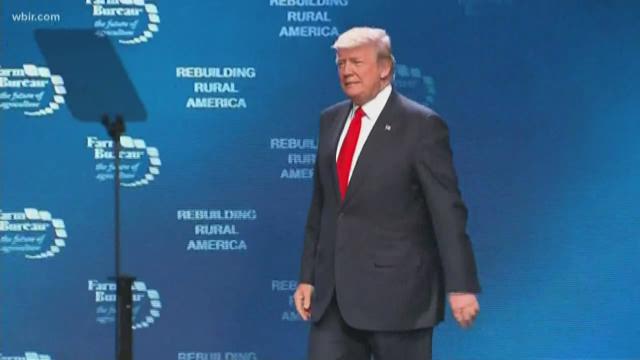 He spoke to a crowd of thousands in Nashville Monday at the American Farm Bureau Federation's annual meeting.

Josey Miller is a member of the Tennessee Farm Bureau and teaches agriculture classes at Lenoir City High School. She also owns a farm with her husband, where they raise beef cattle in Loudon County.

She said the president's speech brought good news for many.

The president spoke about how he plans to help rural America.

"That is why today, in a few minutes, I will take the first step to expand access to broadband internet in America," Trump said before signing an executive order that declares the executive branch will use all viable tools to get broadband to rural areas.

"Some of our kids don't have access to internet because of the road they live on, and that's crazy," Miller said.

The crowd cheered when Trump mentioned changes to the estate tax.

Congress's new tax plan reduced the number of people who pay it.

"If you don't have something set in place to pass your farm on to those who you want it to go to, your family members, then you will end up having to sell pieces of your family farm that could've been in your family for 100 years or more," Miller said.

Trump talked about the new tax plan in place as well. U.S. Rep. Chuck Fleischmann, who attended the speech, said the new tax law will help farmers by letting them write off new equipment.

"It will incentivize farmers or business people, and when business people look at purchases, it's always more beneficial to write something off in the year you purchased it as opposed to going through a depreciation process," Fleischmann said.

Giving Miller a reason to have hope for the future.

Fleischmann said the Tennessee congressional delegation rode with the president on Air Force One for the trip from Washington D.C. to Nashville.

Fleischmann said Trump was very kind and wanted the people of Tennessee to know he truly cares about their well-being.