The Tennessee Treasury Department received 488 claims accusing the state of negligence in road conditions between July 1, 2016, and December 31, 2017. Of those claims, only nine were paid. 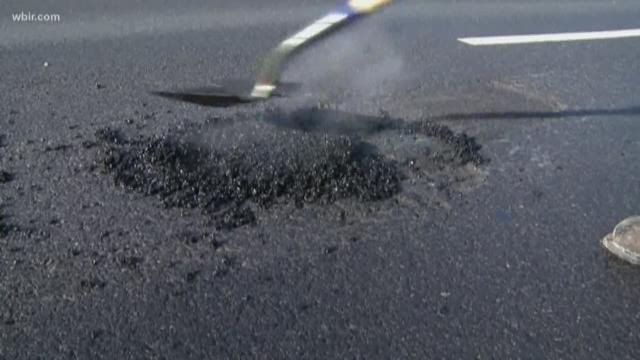 Chances are high if you’ve driven on the interstate in the past couple days, you’ve seen your fair share of potholes.

Tennessee Department of Transportation crews have been working around the clock trying to keep up with growing number of problem spots caused by this weekend’s heavy rains.

Matthew Porterfield, the manager of David’s Tire Pros, says the bill to repair your car after hitting a pothole can be extensive.

RELATED | The problem with potholes: Your pothole questions answered

“[Drivers] come in and realize that it's going to be a lot more than the one tire, so they’re prepared to spend four or five or six hundred dollars," Porterfield said. "Then, they have to be lucky enough that they don't have to replace the wheel."

Negligence claims for potholes are filed with the state’s Division of Claims Administration that falls under the Tennessee Treasury Department.

King said in order for the state to consider shelling out compensation, the driver has to prove negligence. That means TDOT has to have known about the problem prior to the claim and been given a “reasonable” amount of time to fix it.

“What is considered reasonable will vary depending on weather, location, resources, ect. For example, oftentimes after a large storm, TDOT is utilizing all of its resources to plow and clear off the roads," King said. "When weather, temperature or moisture prevents proper repair or emergency repair, it forces delays until it improves. Should TDOT have a reasonable time, but did not repair it in that time, depending on the circumstances, then it is possible TDOT might have been negligent in the proper maintenance of the roadway."

"If drivers hit a pothole and experience damage to their vehicle, they may submit a damage claim. Claims are investigated on a case-by-case basis through the Division of Claims Administration, an agency not associated with TDOT. Investigators review the circumstances, the type and location of the pothole, determine if TDOT had been previously notified of the issue, and if crews had been given a reasonable amount of time to repair the pothole."

According to Tennessee State Code § 9-8-307, the state is liable for "dangerous conditions on state maintained highways. The claimant under this subdivision must establish the foreseeability of the risk and notice given to the proper state officials at a time sufficiently prior to the injury for the state to have taken appropriate measures."

The first step to take is to file a written claim and mail or fax it to the Division of Claims Administration.

TDOT said crews have been working around the clock to patch as many problems spots as possible. If you have seen potholes in your area, you can report them here.