A man charged with intentionally killing his neighbor's dog is not eligible for Tennessee's Animal Abuse Registry. 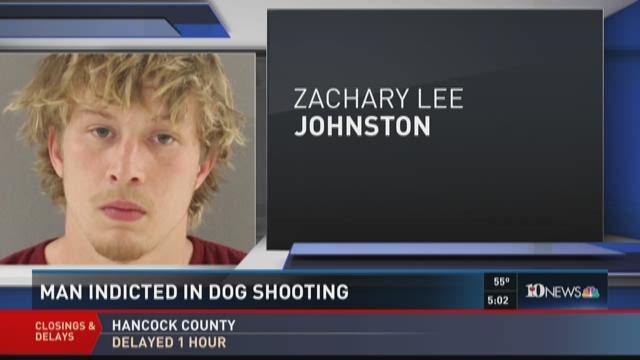 A man charged with intentionally killing his neighbor's dog is not eligible for Tennessee's Animal Abuse Registry.

On a Tuesday in late February 2016, Michelle Cordell let her family's small Chihuahua-mix outside to go to the bathroom.

A search near their Anderson County home found the dog behind the shed of a neighbor's house two doors down with a fatal shotgun wound.

"That's what I want him to tell me: why did you shoot that dog?" Cordell told WBIR 10News, recalling the incident in a March interview.

That neighbor was Zachary Lee Johnston, 25, who now faces the charge of Intentional Killing of an Animal in this case. He's behind bars in the Anderson County Detention Center on a bond of $10,000, after officials arrested him Monday.

<p>25-year-old Zachary Lee Johnston is facing a charge of Intentional Killing of an Animal in the Feb. 2016 shooting of his Anderson County neighbor's dog.</p>

He, however, will not land on Tennessee's Animal Abuse Registry, even if he is convicted.

That's because, according to the law that created the Animal Abuse Registry, only Aggravated Cruelty to Animals, felony Animal Fighting and having sex with an animal qualifies somebody for the registry. And under the law, only "companion animals" are protected, meaning dogs and cats.

Johnston's charge - intentional killing of an animal, a Class E felony, is not one of the qualifying crimes.

District Attorney General Dave Clark, whose office is prosecuting Johnston's case, said, "We've charged him with the crime we think fits the evidence."

He noted any change in the law would lie with lawmakers, saying, "the State Legislature may need to look at what does or doesn't qualify for the registry."

The registry is the first of its kind in the nation.

"The purpose behind the law is really to prevent people, who have been cruel to animals, from being able to, for example, adopt or keep animals in the future so that the same thing doesn't happen again," UT law professor Joan Heminway told 10News.

The registry law went into effect Jan. 1, 2016, and so far only seven people are on it. One is a Blount County woman, three are Greene County men and the remaining three are from elsewhere in the state.

"I know there's a lot more violence going on with animals than seven convictions in a year would indicate," Heminway said.

Heminway, the Rick Rose Distinguished Professor of Law at UT's College of Law, said that's likely because some people enter plea agreements for a lesser charge, which would not land them on the registry.

Additionally, she said, some people involved in a crime like animal fighting may face charges other than 'Fighting or baiting exhibitions,' including federal conspiracy and gambling charges.

"There also may be some breakdowns between the court clerk's offices and the Tennessee Bureau of Investigation - the TBI, who is in charge of maintaining the list, under the legislation," Heminway said.

Per the law, it's up to each county clerk to alert the TBI when someone is convicted of an offense that would land him or her on the list.

"Keep in mind, of course, it's not just a charge of animal abuse that puts somebody on the list," Heminway said. "There actually has to be a conviction of a felony before they can be put on the list."

A charge of Aggravated Cruelty to Animals requires that the crime involve "conduct which is done or carried out in a depraved and sadistic manner and which tortures or maims an animal."

Clark said an animal shooting, "unless it was done in a way that was intentionally torturous, like shooting mutlitple times or shooting to wound," would not qualify as Aggravated Cruelty.

"Shooting and immediately killing would be a more appropriate charge for 'Intentional Killing of an Animal,'" Clark said.

There was a preliminary hearing for this case, Clark said, at which evidence was presented and witnesses gave testimony.

The assistant district attorney who heard the case "didn't think this qualified as 'depraved and sadistic' under the statute," Clark explained.

Johnston's arraignment is set for Jan. 23.

A family member told 10News Johnston is no longer living at the home two doors down from Michelle Cordell and her family.

"We definitely condemn any animal cruelty or anything that happened with him," said the family member, who asked 10News not to publish his name, as he doesn't want to be publicly associated with Johnston.

Issuing a statement on behalf of the family, he said, "We wish to express our deepest condolences to the family members affected by this crime. Like the community at large, we are outraged by such a senseless act of violence. We also want to state emphatically that we condemn all forms of abuse towards, and mistreatment of, animals, and perpetrators of such crimes should be prosecuted to the full extent of the law. Our family disavows all actions taken by Zach Johnston. This is not, and has never been, an issue on the part of the judicial system, law enforcement officials, medical professionals, or especially our family. It is, unequivocally, the failure of a troubled young man to accept personal responsibility for his actions and seek medical, professional help for his problems. We continue to hope that this incident will bring further attention to the problem of animal cruelty in the state as well as across the nation."