The woman died after at least four dogs attacked and seriously injured her in August. 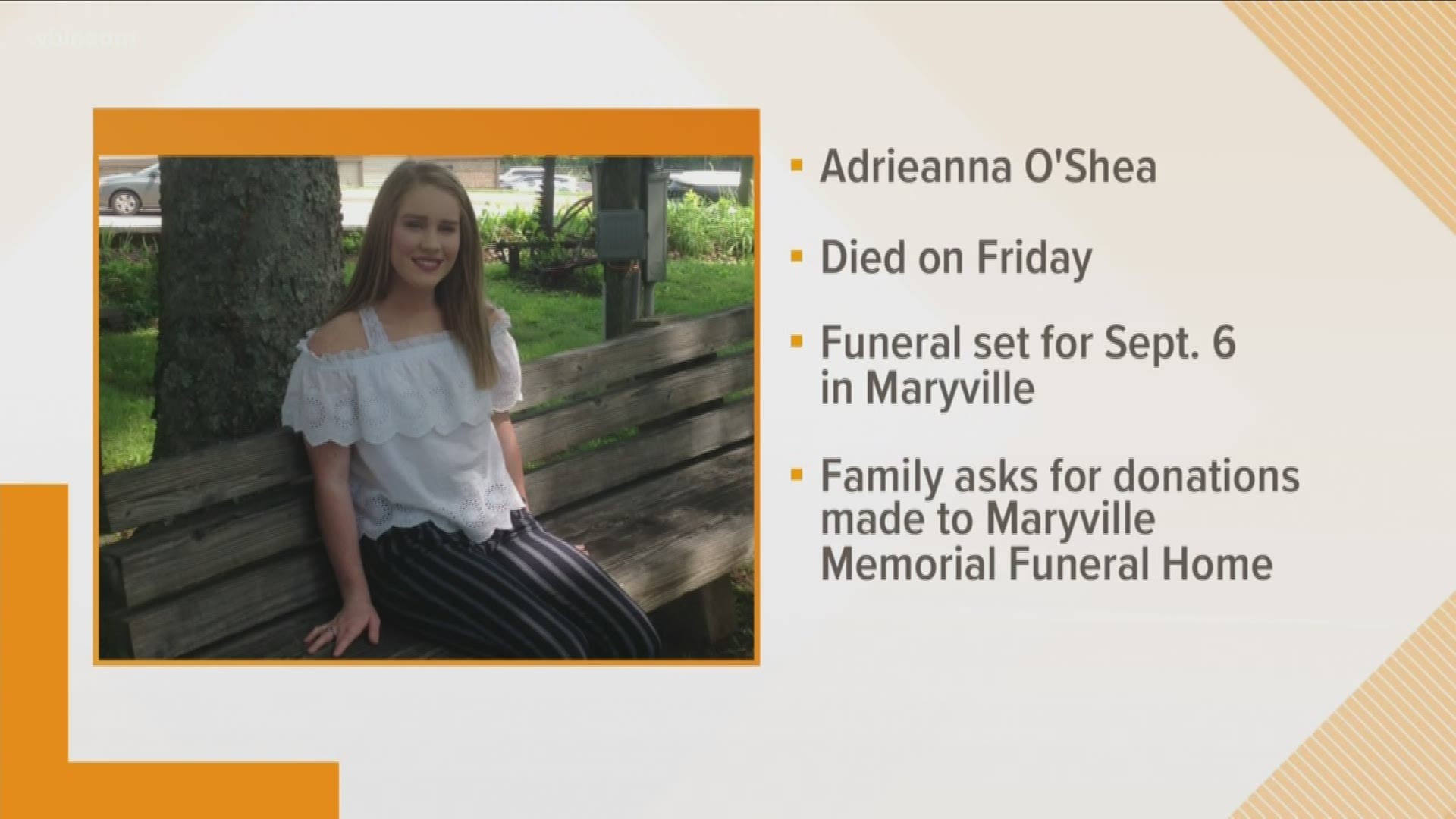 A 19-year-old Maryville woman has died more than a week after she was hospitalized when she was reportedly attacked, dragged and tossed by several dogs in Knox County.

Adrieanna O'Shea's family said the recent Heritage High School grad was 'the strongest and most determined girl to have ever walked the Earth' in her obituary.

"She loved her music and dancing. She worked at Walmart with her mother and boyfriend Hunter while planning to attend Walter State. She was loved by many and will be missed dearly," the obituary said.

O'Shea's family and friends will gather for her funeral on Sept. 6 in Maryville.

Her family is asking for donations to be made to Maryville Memorial Funeral Home in lieu of flowers to help with funeral expenses.

According to the incident report on the dog attack, on Aug. 23 deputies responded to a South Knox County home on Crescent Drive around 2 p.m. and immediately saw emergency personnel bringing a female, later identified as O'Shea, covered in mud and blood in a gurney down the driveway to an ambulance.

The woman's clothes were ripped off and her hair was bloody and matted all over the top of her head. The report said she wasn't alert and wasn't responding to deputies. She was transported to UT Medical Center and later passed away on Aug. 30.

The neighbor, who called 911, told investigators O'Shea had visited the night before and forgot her purse, so she came back to get it.

The witness told deputies she was inside her home when she heard the victim say "No Boscoe!" and then begin screaming "Help Me!"

The witness told investigators she ran to the door, opened it, and found "all five dogs attacking" her, the report said.

She said the woman "continued to scream and cry for help as the dogs were mauling her and dragging her towards the wooded area."

She said the dogs were dragging her and tossing her in the air, and the woman eventually jumped a small fence to try to get away from the dogs, according to the report. She had multiple bite wounds to both her arms and all over her body. Her left arm was badly bitten and she had lost a lot of blood.

According to the report, deputies said they shot one of the dogs, a black lab/mastiff mix, because it was charging them and trying to attack them as well and the other dogs were hiding at the side of the home and in the garage area.

Four other dogs were caught and transported to Young-Williams Animal Center to be held and were later euthanized.

RELATED: They were "doing their job" | Owner defends dogs who attacked woman, says they've been euthanized

The dogs' owner, who lived next door and had arrived after the attack, told investigators that the dogs were "just doing their job" and that at least one of them was trained to attack when guns were pointed at it, the report said.

The owner also told investigators they were family dogs and were contained by an invisible fence.

On Aug. 28, the owner said the dogs have been put down.

"I would not own any kind of animal that would do something like this. We are all traumatized with this freak accident and are praying for Adrieanna and her family," they said.