Update 7 p.m. Aug. 9: Authorities suspect a "mechanical failure" led to three girls falling 35-45 feet on Monday night from the gondola of a Ferris wheel at the Greene County Fair in Greeneville. 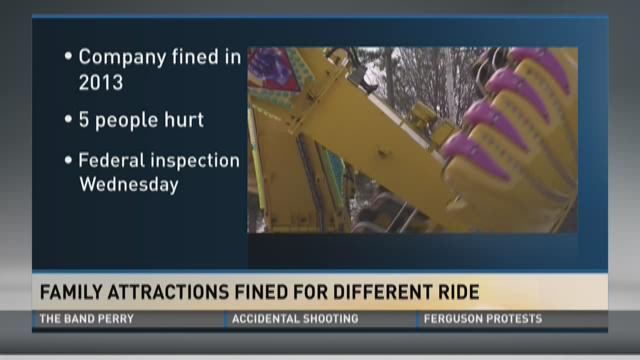 Update 7 p.m. Aug. 9: Authorities suspect a "mechanical failure" led to three girls falling 35-45 feet on Monday night from the gondola of a Ferris wheel at the Greene County Fair in Greeneville.

Greeneville police and a third-party inspector briefed reporters Tuesday afternoon from in front of the Ferris wheel. A 6-year-old-girl who fell suffered a traumatic brain injury, while injuries suffered by a 10-year-old and 16-year-old were not life threatening.

The girls were being treated at a Johnson City hospital. An update on their condition was unavailable Tuesday afternoon.

"We've got all kinds of results coming in, but the inspectors have found that there's a mechanical issue with this ride behind me that they believe led to the incident at hand," Detective Capt. Tim Davis said.

Inspection reports will not be released until the state authorizes their release, according to Davis.

Jennifer Farrar, spokeswoman for the state Department of Labor and Workforce Development, told 10News it would be Wednesday before the state could release the reports.

On Monday night, authorities said a gondola carrying the girls had flipped, pitching the girls out, and striking another gondola in the process.

Also, a federal inspector from an unnamed agency is expected to be at the scene Wednesday, according to Davis.

All mechanical rides at the fair remain shut down by state law directive. They were closed after the girls plunged from the Ferris wheel about 6:30 p.m. Monday.

Frank Guenthner, a third-party inspector, briefed reporters about his review of rides at the Greene County Fair.

Frank Guenthner, president and owner of FX Inspection Services, said he looked at the Ferris wheel and all the other rides. Of the other rides, he said, he found only "minor" problems, such as cracks in fiberglass, most of which were quickly fixed.

He did not address the Ferris wheel specifically during Tuesday afternoon's press conference.

Guenthner said he's served as an inspector at the Greene County Fair three consecutive years. He inspects rides throughout the U.S.

The Ferris wheel gondolas did not have seatbelts, Guenthner said, but they're not required. The manufacturer has discretion on whether belts should be included, he said.

Authorities say three children were injured Monday night when they fell 40-50 feet from a Ferris wheel at the Greene County Fair in Greeneville. (Photo: Freddie Krauss)

A representative from Family Attractions was at the scene during Tuesday's press conference but did not speak.

Joe James, representing the insurance company that covers the Greene County Fair, said his firm has insured the fair for over 20 years.

"They have been a great clients of ours," James said.

Once the Ferris ride is released by the state, it will be taken back to the manufacturer for a complete review, James said.

The fair, which opened Monday, continues through Saturday night.

Davis declined Tuesday night to talk about Family Attractions' ties to a 2013 incident that injured members of a family at a North Carolina fair.

The Band Perry, whose three members are from Greeneville, tweeted Tuesday night to pray for the three girls.

Please pray 4 our hometown - 3 precious girls were badly injured on the ferris wheel at our county fair yesterday. #pray4greeneville xxkP 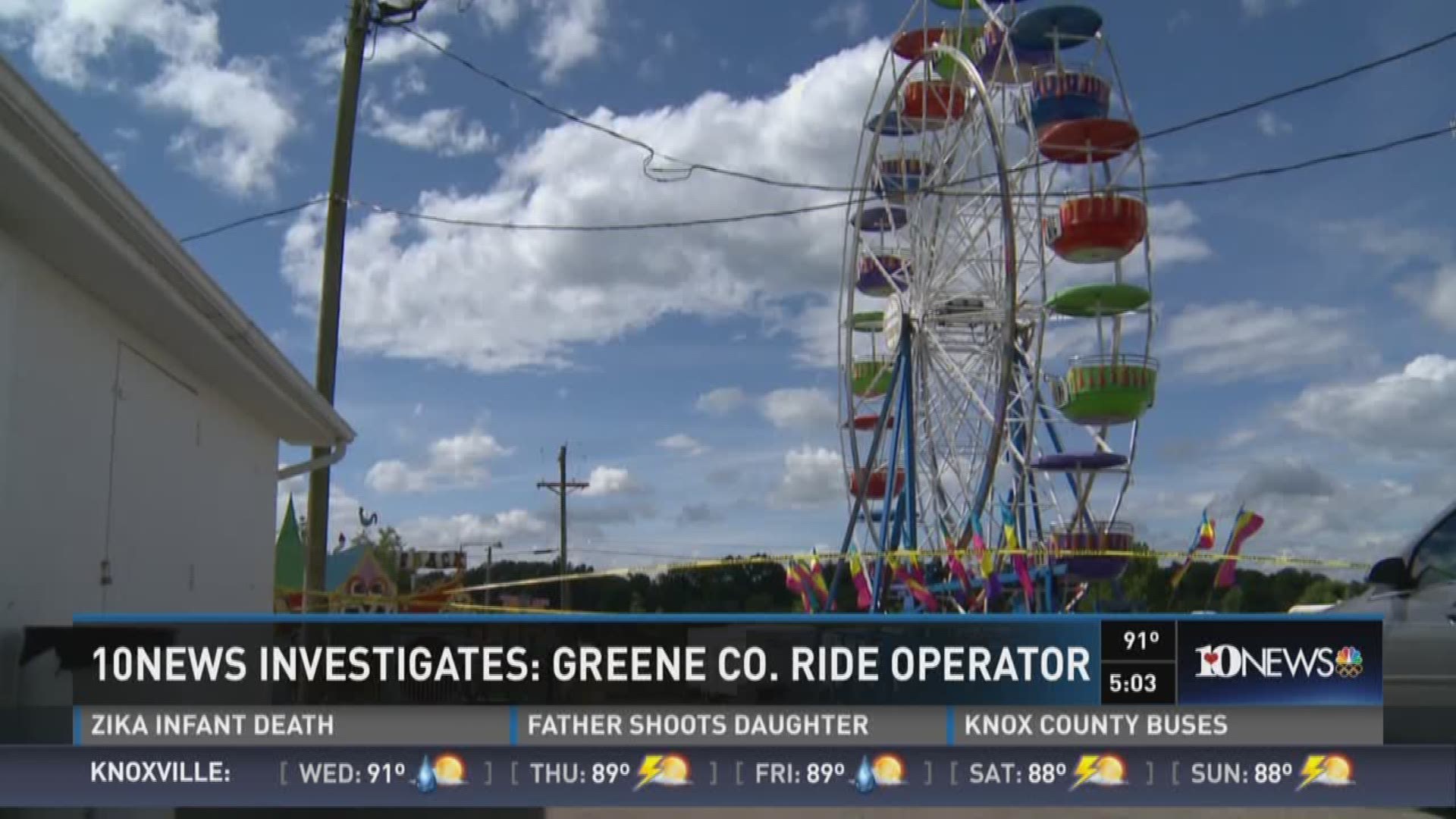 Previous Aug. 9 update: One of the three girls who fell from a Ferris wheel at the Greene County Fair suffered a traumatic brain injury, hospital officials announced Tuesday morning.

The unnamed six-year-old was intubated at the scene by emergency crews and brought to the Niswonger Children's Hospital in Johnson City, Tenn.

Her 10-year-old sister also fell from the ride and suffered an arm injury, but is in stable condition.

The third patient, a 16-year-old girl, was in critical condition originally, but doctors said she has done well through the night and they plan to downgrade her condition to stable.

Due to the family's request, the hospital said it couldn't release more details about the teen's injuries from the fall.

All rides at the Greene County Fair will remain closed until third-party inspections are completed.

One inspector was on-site at the fair already and a third-party inspector arrived Tuesday morning. .

The fair will continue without the operation of its mechanical rides until third-party inspections are completed.

The incident happened about 6:30 p.m. Monday at the Greene County Fair in Greeneville.

A bucket carrying the three children flipped over, striking another bucket in the process. The three children were thrown out of the bucket when it flipped, according to Detective Capt. Tim Davis of the Greeneville Police Department.

"One basket flipped over and made contact with the other one," Davis said. "There was one basket that all three of the juveniles fell out of."

Two children were flown to Johnson City Medical Center. The other was transported by ambulance. Parents of the children were at the fairgrounds at the time, according to Davis.

The fair runs through Saturday.

This story will be updated when more information becomes available.

Original Story on Aug. 8: Three children were treated at a Johnson City hospital Monday night after falling 35 to 45 feet from a Ferris wheel, according to Greeneville police authorities.

The unnamed children were alert and "fine" late Monday, Detective Capt. Tim Davis of the Greeneville Police Department said in a press conference Monday night at the scene. A rumor that one child had died was false, he said.

The incident happened about 6:30 p.m. Monday at the Greene County Fair in Greeneville.

"One basket flipped over and made contact with the other one," Davis said. "There was one basket that all three of the juveniles fell out of."

Two children were flown to Johnson City Medical Center. The other was transported by ambulance. Parents of the children were at the fairgrounds at the time, according to Davis.

"We are aware of the incident," department spokeswoman Jennifer Farrar told 10News.

Family Attractions must call a third-party inspector to the scene within 24 hours and they also must "cease and desist operation of the entire fair," Farrar told 10News.

Davis said all mechanical rides have been shut down. The rest of the fair can and will continue to operate, he said.

It opened Monday and ends Saturday.

Davis said much will depend on what the inspector's report shows. Police don't know much about rides and so must rely on the third-party expert, he said.

"A lot of questions that you have we’re not going to be able to give the answer to until we have the inspector’s report," he said Monday night. " We don’t know how carnival rides work. I'm not going to make any speculations as far as how it happened and what happened."

On Thursday, the state Department of Labor and Workforce Development issued a notice noting there have been "four reported amusement device accidents in Tennessee since July 1."

"It is imperative for passengers to ensure the company has a valid operating permit, make themselves familiar with the posted safety procedures, checklists, photos, and signs," the state's notice last week states. "Passengers must keep their arms and legs inside the car while in motion. They should also properly restrain themselves before the car leaves the station and when the car stops.

Earlier this year, ride owner Joshua Gene Macaroni entered an Alford plea, which allows a defendant to plead guilty while maintaining his innocence, to obstructing justice in the incident.

Macaroni agreed to spend 30 days in jail. Macaroni also was ordered to pay a $22,500 fine, which was the amount he would have made off the ride during the fair.

Five people suffered injuries Oct. 24, 2013, when The Vortex started up unexpectedly as people were trying to disembark. Investigators determined that a safety mechanism designed to keep the ride from moving had been disabled.

The family has settled a lawsuit over the accident with Macaroni and others including Family Attractions Amusement LLC, which brought The Vortex to the fair, according to WRAL. Terms of the settlements haven't been disclosed.